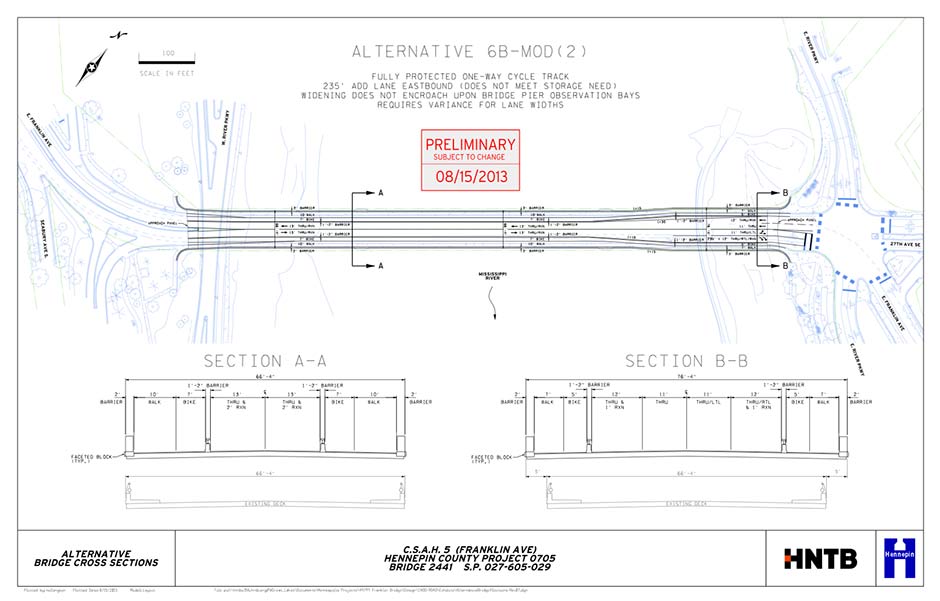 Plans for the redesigned Franklin Avenue bridge include a cycle track and the addition of historically appropriate lighting.

The Franklin Avenue bridge is scheduled for a renovation by Hennepin County beginning next fall. The renovation will include a new deck, rebuilt railings, the installation of historically appropriate lighting, repaired arches and piers, and a widening of the east side of the bridge by ten feet. The County has also proposed that the renovation include a redesign of the bikeway on the bridge, allowing for a protected cycle track.

Plans allow for 13′ wide vehicle lanes, and a 10′ wide sidewalk and 7′ wide bike lane on both sides of the roadway.

The Franklin Avenue bridge (also known as the Cappelen Memorial Bridge) was built by two “prominent Norwegian engineers” according to the Minneapolis Heritage Preservation Commission. When it was built in the 1920s, the bridge was considered to have the longest concrete arch in the world. The bridge replaced a steel truss bridge built in the 1880s, and allowed for increased auto traffic and the expansion of the streetcar line to the east bank of the river.

The bridge was added to the National Register in 1978, and renovation plans will need to be reviewed by the MnDOT Cultural Resources Office and the State Historic Preservation Office.

Information is available on the Franklin Avenue bridge project page.