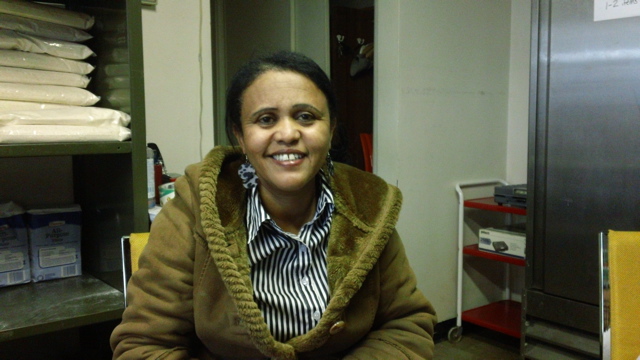 Almaz Zeru works part-time three days a week at a pizza parlor.  She is a survivor of the ravages of war in Eritrea and has made dramatic life/cultural changes coming to Minnesota.  She has used Francis Basket food shelf in Highland Park for three years.

“I get minimum wage and when I get a better job I won’t need to use food assistance,” said Zeru, a single mom of two children.

Hana Geta, a food shelf user, is from Ethiopia.  Her husband works and they have two young children.  They have been here for three years.  “I love America.  I started my marriage here.  My life is blessed,” said Geta.

Sarah Yang, a basic needs program manager from Neighborhood House, is an overseer of the Francis Basket food shelf.  “The people using this food shelf are 50 per cent East African, 20 percent Latino and the rest are Caucasian,” said Yang. “We have difficulty finding ethnic specific food.  Right now we have West African (Kenyan) flour, but that is not the food this population normally uses. We did a survey at National Night Out event asking people what foods they would like to see at the food shelf.”

Users of the food shelf can come once a month to choose what they want.  It is a walk-in choice model.  Besides boxed or canned foods, there are refrigerated foods, such as chickens, eggs and milk.  The food shelf allows each person 15 pounds of food.  There is additional emergency food assistance for special situations.

Most people hear of the programs through their friends.  In 2011, Francis Basket food shelf provided more than 61,000 pounds of food to more than 1940 households.

“The sisters got to be in their 70s, 80s and 90s and could not run the food shelf no longer due to their advanced ages,” said Joan Schlecht, director of basic needs programs at Neighborhood House.

St. Paul Franciscan’s order was founded in 1863 in Waldbreitbach, Germany.  In 1923, 12 sisters were sent to St. Paul.  Since their arrival the sisters had founded several charities and care facilities. At one time, there were 50 nuns, but last year the number was down to six.  The order’s regional center in Highland closed in May.  As the sisters departed, Francis Basket food shelf was closed.

The Franciscan Sisters turned to the Sisters of St. Joseph of Carondelet to help negotiate for Neighborhood House to take over the responsibilities of the food shelf. “We had two months of thoughtful meetings,” said Schlecht.

“To re-open Francis Basket, we had to be re-inspected by the city, licensed.  We had to reconnected with food suppliers, and deliver the food,” said Yang.  “We also wanted to strategically hire people who could speak many languages specific to this population.”  Two former volunteers have stayed on.

“On August 10th, Francis Basket reopened. Seventy-one families — 290 individuals — have been served since August,” said Yang. “We are now open two days a week, Tuesday and Fridays, 9 to noon and 1 to 4 p.m.”  Francis Basket is located at 1293 E. Maynard Street in the Sibley Manor Apartments in Highland Park.

Francis Basket is open to the community but people must reside in a 55116 area.  If you participate in one of Neighborhood House programs or have lived in the United States for less than five years, you can use the food shelf. To find a food shelf in your area of St. Paul, call 651-793-7340.