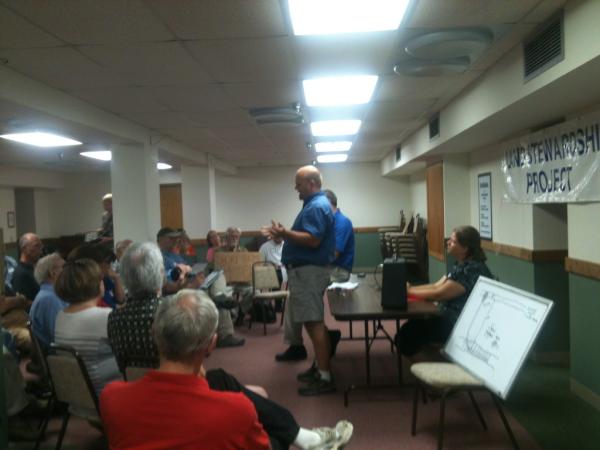 The Land Stewardship Project had tweeted both rally and meeting as they happened.

Weiss reports that a key demand is that Superior Sand Systems Inc, a privately company based in Calgary, be transparent about its investors:

After a short rally on Tuesday, mining opponents led by the Land Stewardship Project met with Paul van Eijl, who’s leasing land in Wisconsin for Superior Sand Systems Inc. of Calgary, Canada for mining the sand. . . .

One of the themes that emerged was worries about a lack of transparency about who owns the companies, said Doug Nopar, a land stewardship leader. “That fuels a lot of doubt,” he said.

You can’t have open communications when no one will tell the public who the real owners are, said Kelley Stanage of Houston, who spoke at a short rally before the meeting with van Eijl.

“Pull back the curtain,” said Johanna Rupprecht of rural Lewiston who’s on the land stewardship staff

Van Eijl said he can’t say who’s funding Superior because those with a lot of money to invest don’t want to be known. That’s common not only in the oil/gas/fracking industry but also many industries, he said. “They like to keep behind the scenes,” he said.

Superior Sands Systems website‘s “Investors” section notes that the company is “in the process of raising $9M in investment.” Redtail Capital Partners, Inc. of Calgary is a partner in raising capital. Redtail’s Vice President of Finance, Rick Ferris, has served as chairman of the board of Global SynFrac, an oil and gas research and development company founded by Superior Sand Systems’ CEO Mike Fitzgerald. 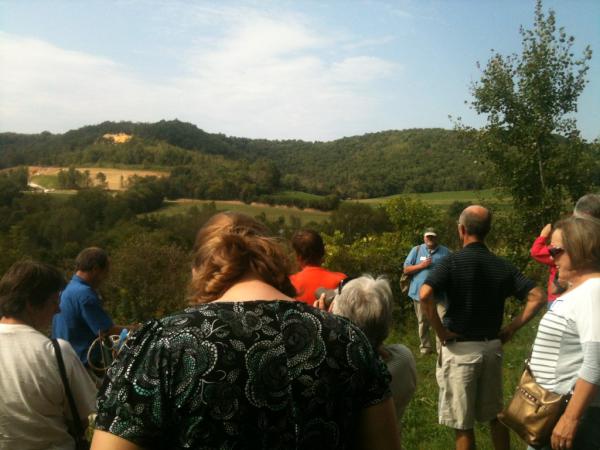 The May 2006 Oil and Gas Inquirer reported that Fitzgerald raised much of his early capital from friendships developed in hockey and auto racing. Global SynFrac developed a “proprietary new proppant material from geopolymer”–in short, a form of synthetic sand.

Weiss confirms reports that the fracking industry is in a dip:

The industry has slowed down in the past several months because of less demand, [Van Eijl] said. But as more power plants switch from coal to natural gas, it could take off again. The analogy he used was that the mining/processing industry was going at 85 mph for a while but has slowed to 55 mph.

He is ready to sign his first lease in Wisconsin, he said. Landowners will get $1 to $3 per ton of frac sand, depending on quality and how far it’s from a rail line. It’s impossible to say how many tons will come per acre because it varies so much, he said.

Read the entire article at the Bulletin.

Photo: The meeting in Winona (above); Rural Minnesots citizens call for transparency & acountability in the frac sand industry at Land Stewardship’s regional day of action (below). Via Land Stewardship Project’s twitter account.