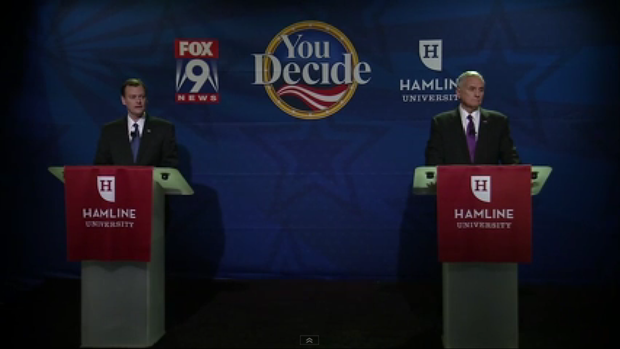 Cautious, controlled, and scripted. This is how I would describe the Sunday morning Minnesota gubernatorial debate between Jeff Johnson and Mark Dayton.

I attended MN gubernatorial debate at Hamline and did post-debate analysis with Jeff Passolt of Fox 9.

The debate was cautious, controlled, scripted, and candidates stayed on talking points. It was boring in many ways. No gaffes (although both parties tried to spin me that their candidate hit a knock out punch or that the other gaffed). Johnson did not hit a home run and Dayton sat on his lead. Johnson is a better speaker but neither have much passion. They were listless at times, boring at others. They were so cautious, giving predictable answers to questions often not very interesting such as your favorite fast food, or whether they had either smoked pot. Republicans tried to argue that Dayton saying he supported single payer insurance was a game changer, but is anyone really surprised by this? Conversely, some said that Johnson saying he had no clue on how to define the middle class was a gaffe. Doubtful.

Watch a video replay of the debate.

Finally, neither really seemed to have a grasp on the details of public policy–lots of general views on visions of the government and general statements about what they want to do but not a lot of policy detail. For geeks like me who worked in government writing laws and implementing them (or teaching policy making and implementation), the debate was thin on details.

I think the race is essentially over and absent a real unforeseen event Dayton wins. The polls have not changed much since the August 12, primary, putting Dayton at about a 10 point lead. There is no evidence the race is tightening, early voting is depleting the number of individuals who have not voted, the DFL has more money than the GOP, and Johnson has done nothing to change the narrative to his favor.

Depending on how one it was described, the debate was either co-sponsored by Hamline and Fox 9 or the latter sponsored it and Hamline merely rented space. I mention this because there was controversy surrounding the decision to exclude IP candidate Hannah Nicollet from the debate. Because I teach at Hamline I will not take a position on this decision. I will simply say that I have taught election law and non-profit law for 16 years and have done training and given advice to hundreds of non-profits. I often advise them to be careful during election season when inviting candidates to address their organization. All candidates must be given a equal opportunity to address their organization (if an invitation is extended to any) on terms that are comparable.

Ms. Nicollet may have done better getting press by being excluded from the debate than by attending. Had she attended, she might have broken up a debate that was simply not that interesting.

One question they both bombed was on the issue of physical punishment for children. Neither know the law. Both tried to draw lines between legitimate and excessive physical punishment. I have worked with social service workers who tell you that any use of physical punishment against children by parents or foster parents is considered wrong. Culturally we are moving away from the idea it is okay to spank kids. The idea that we can hit children is contrary to the law and IMHO, just outdated. But neither wanted to take the lead on this issue.

That is what the law says but go talk to any caseworker and they will tell you that any instance of physical punishment they treat as abuse. Current law allows some physical punishment but the difficulty Johnson and Dayton had in drawing the line reflects the fact that it is difficult to draw the line. That difficult line drawing (my opinion) tells me that physical punishment against children is or should be as outdated as the concept that husbands should be allowed to physically punish their wives. We call that domestic abuse–a crime–and hitting children should be viewed the same way.

Had a fun time talking to Jeff and Kelcey Carlson from Fox 9–both terrific people. Jeff and I talked snow shoeing and cabins and we explained who Bronko Nagurski was to Kelcey. Keley and I talked running.