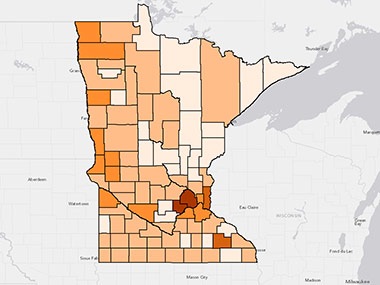 Tuesday, Minnesota 2020 presented information showing the percentage of taxpayers in each Minnesota county that would be affected by Governor Dayton’s proposal to create a new fourth income tax bracket. The percentage of full-year resident taxpayers affected by the proposed fourth tier ranges from 0.2 percent in Pine County to 3.4 percent in Carver County. Statewide, only two percent of Minnesota taxpayers with taxable income in excess of $250,000 (married-joint filers) would be affected by Dayton’s proposed fourth tier.

In both printouts, the legislative districts are listed alphabetically by the last name of the legislator currently representing the district.

Please note that the information in these printouts is for entire counties, not just for the portion of the county in the legislative district. For example, the listing for Anoka County under district 35A (Rep. Abeler) represents the total number of taxpayers and fourth tier taxpayers in all of Anoka County, not just in district 35A. Geocoded information for the portion of each county within a specific legislative district is not available.

As noted in yesterday’s Minnesota 2020 article, the primary advantage of the Dayton fourth tier income tax proposal is not that it only affects the wealthiest two percent of Minnesota households. Rather, the principal advantage is that it makes Minnesota’s tax system less regressive and more fair by better aligning combined state and local taxes with the ability to pay.

At the same time as it is reducing tax regressivity, the Dayton’s fourth tier income tax proposal is helping to balance the state budget and restoring funding for critical public investments that have been short-changed for the last decade. For the sake of revenue adequacy and tax fairness, the fourth tier proposal must become law during the current legislative session.