Today, September 2, 2012, is the fourth anniversary of the first day of Peace Island, “Hope in a Time of Crisis, A Solutions-Driven Conference”. Peace Island was a remarkable and exhausting Tuesday and Wednesday running at the same time as the Republican National Convention just two or three miles down the road in downtown St. Paul, September 2-4, 2008.

Earlier today, I received word that my committee colleague who helped organize that Conference, Verlyn Smith, passed away on Friday, August 31, 2012. Susu Jeffrey, who originated the idea of Peace Island, commented “Oh, the loss! What I liked so much about Verlyn is…just himself, this large, gentle presence with the thoughtful, often humorous, comments.”

Verlyn’s memorial service will be next Sunday, Sept. 9, at 3 p.m. at Grace University Lutheran Church, 324 Harvard St., Minneapolis 55414. He was a retired Lutheran Pastor and his last call was at Grace Lutheran. Here’s the only photo I have of him at the Peace Island Conference. He’s the man seated at the right. 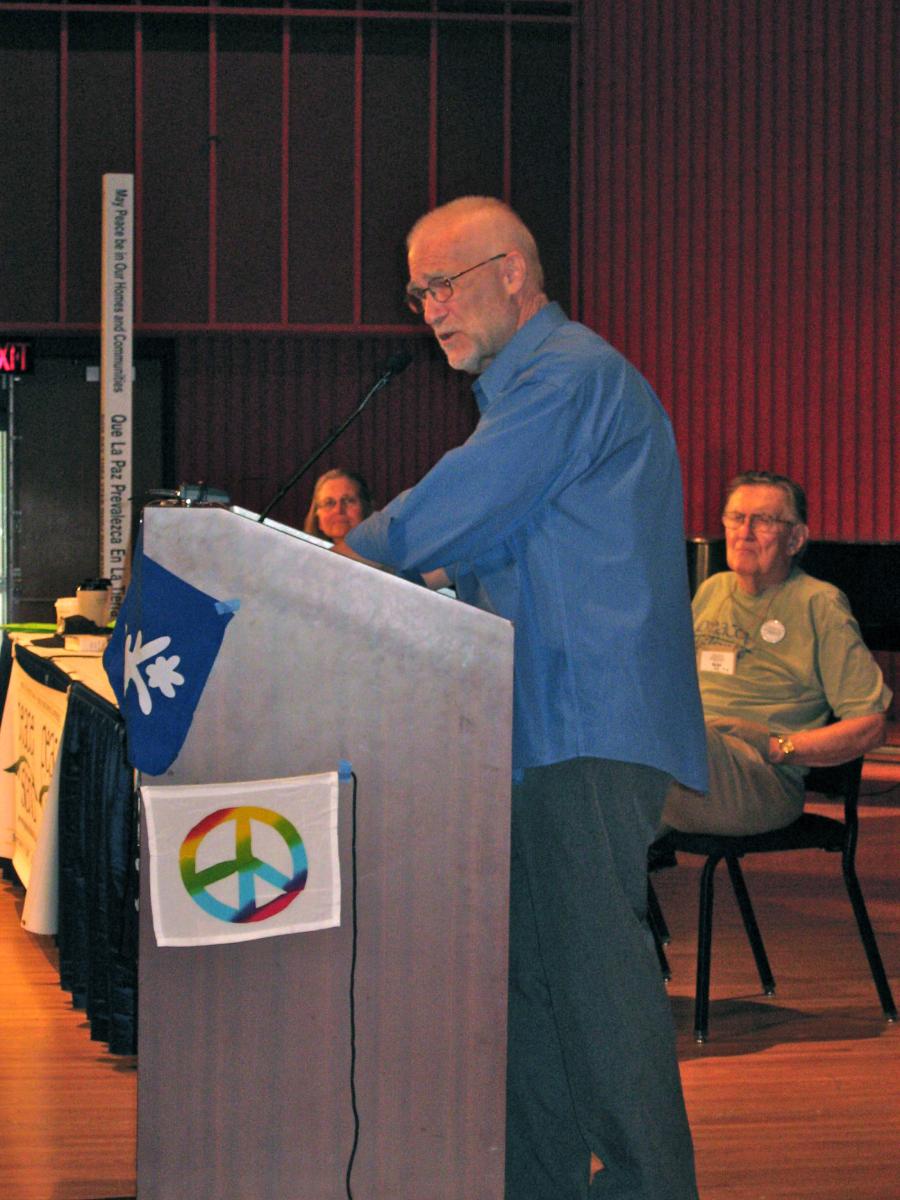 Peace Island was a rather remarkable event. In the end a total of at least 23 speakers, mostly nationally known, addressed the audience in a half dozen plenary, and several other specific sessions. Several hundred people attended one or more of the sessions.

Peace Island was so peaceful that it attracted no interest from the news media, including the alternative media from the the progressive left who, to our knowledge, never did any reporting from or even about the event.

This wasn’t due to lack of effort on the Peace Island organizing committee’s part.

Our event was just too peaceful, apparently. It was boring from a news standpoint, in other words.

The action was down the street in St. Paul, inside and outside the Republican National Convention. Paradoxically, even those committed to peace and justice seem to revel in conflict.

Peace Island covered a great array of topics. Here is a five-page portion of the program booklet for Peace Island: Peace Island Sep 2-3 08001

Our committee quite literally wrestled with all aspects of the agenda for nearly two years before it convened. We were all volunteers. Visionary with the idea was Susu Jeffrey who, with Dennis Dillon, ultimately the chair, moved the idea forward.

Others on the committee included Dick Bernard, John and Marie Braun, Rebecca Janke, Ann Lewis, Bob Milner and Verlyn Smith. A couple of us, including Verlyn, were laid low with serious illness at one time or another.

The program was solely sponsored by the Minnesota Alliance of Peacemakers (MAP).

We early on decided that the conference would be solutions based. It is difficult to keep such a focus when there are so many problems, but the speakers generally did their best.

Perhaps the speaker with the greatest problems to confront ‘back home’ was Anne Hastings, Director of the Haitian microfinance group Fonkoze. During the summer and fall of 2008 four separate hurricanes hit Haiti causing immense disruptions and death and destruction in the tiny country. Fonkoze was a nationwide agency serving the needs of the poor, and its members severely hit. This was one and one-half years before the earthquake of January, 2010. 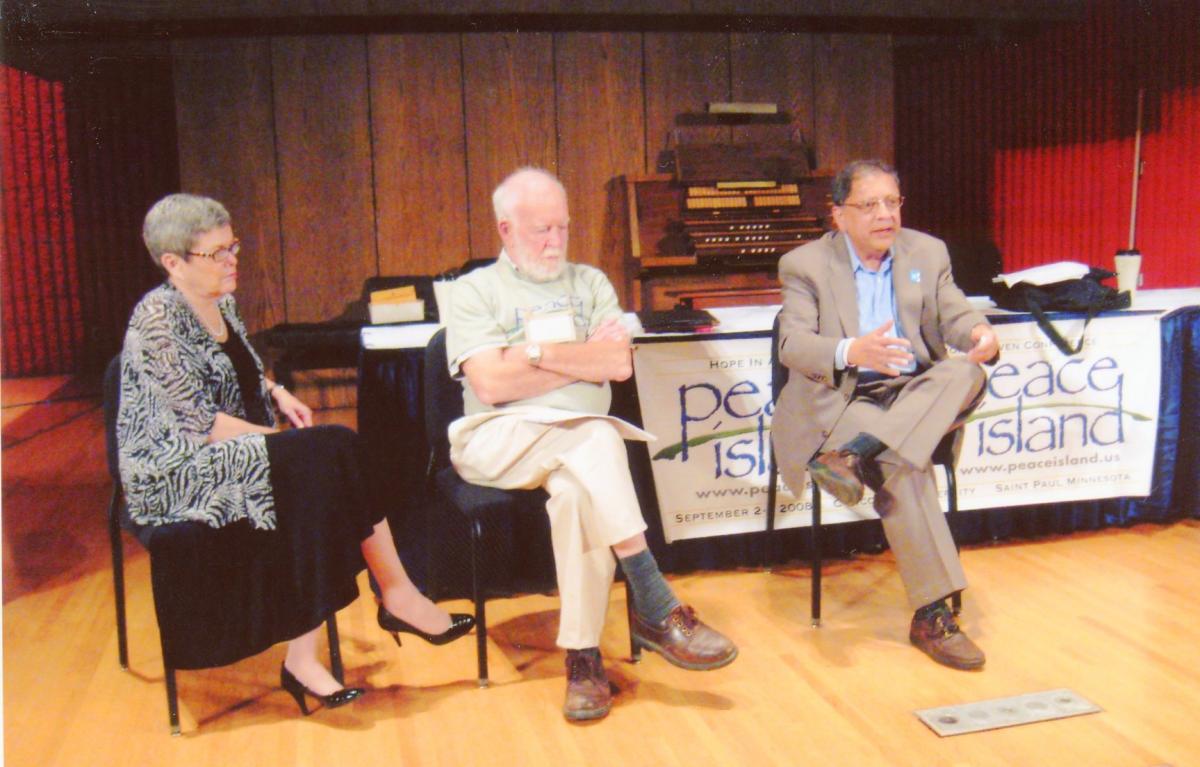 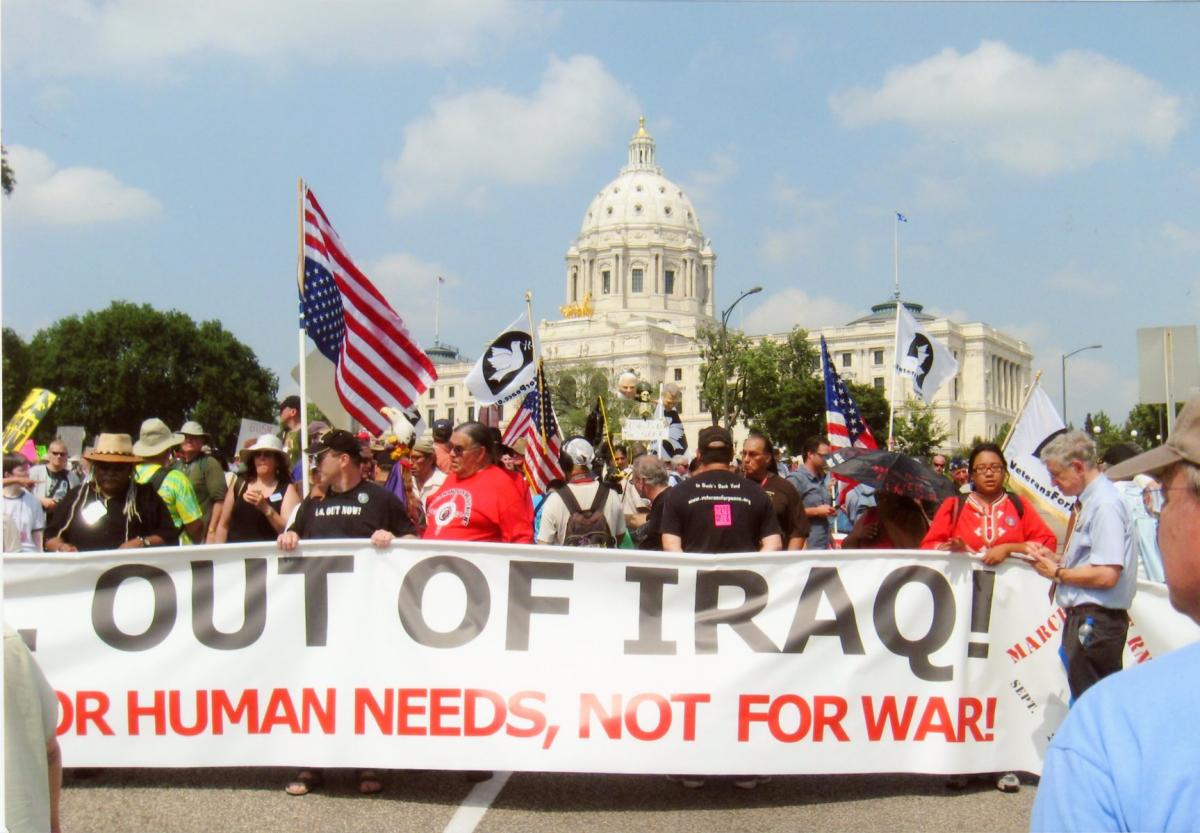 At demonstration on Labor Day 2008 in St. Paul MN 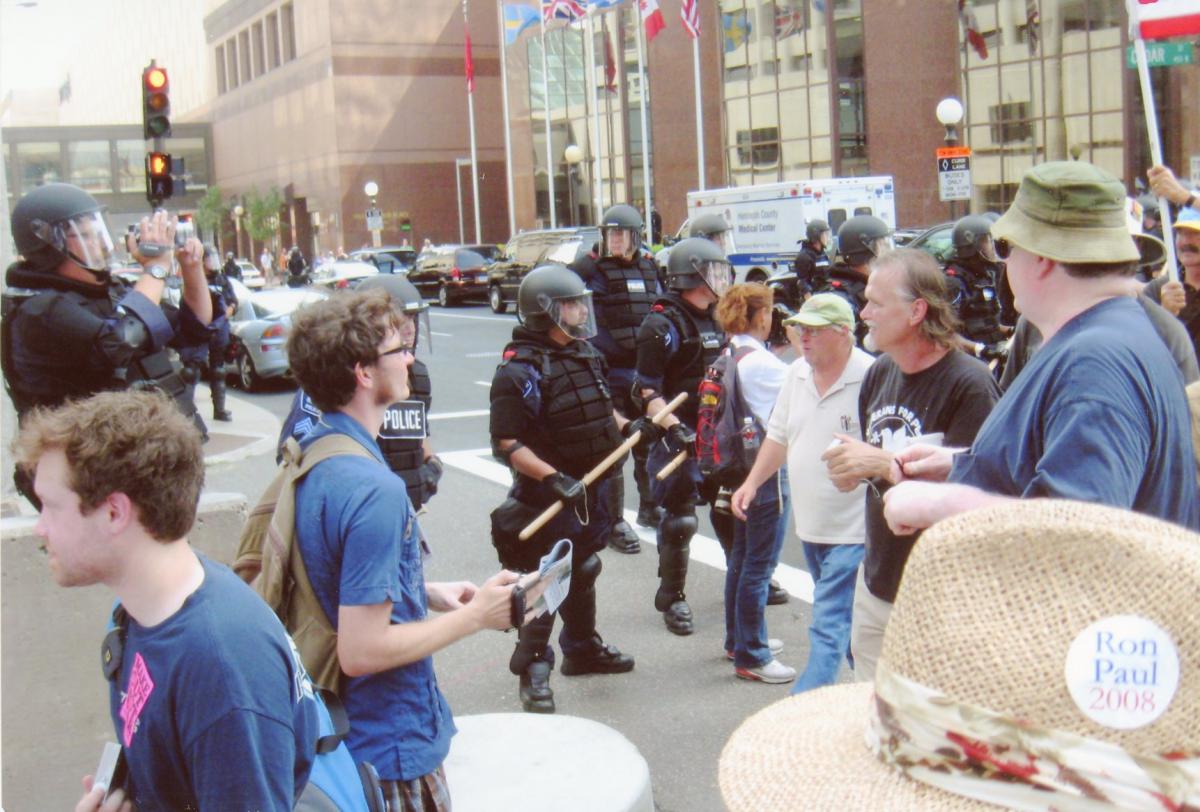 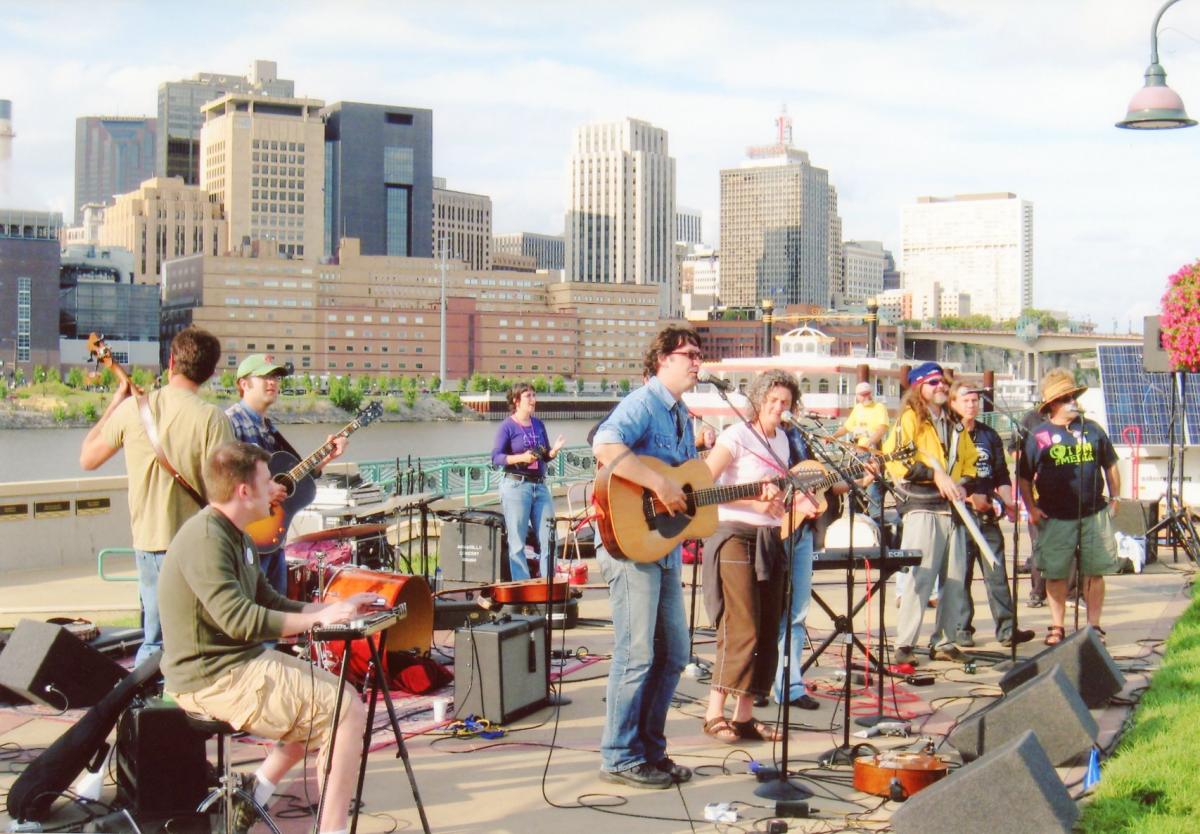 Concert at Peace Island Picnic Sep 4, 2012. This was separate from the Conference but a directly related event. 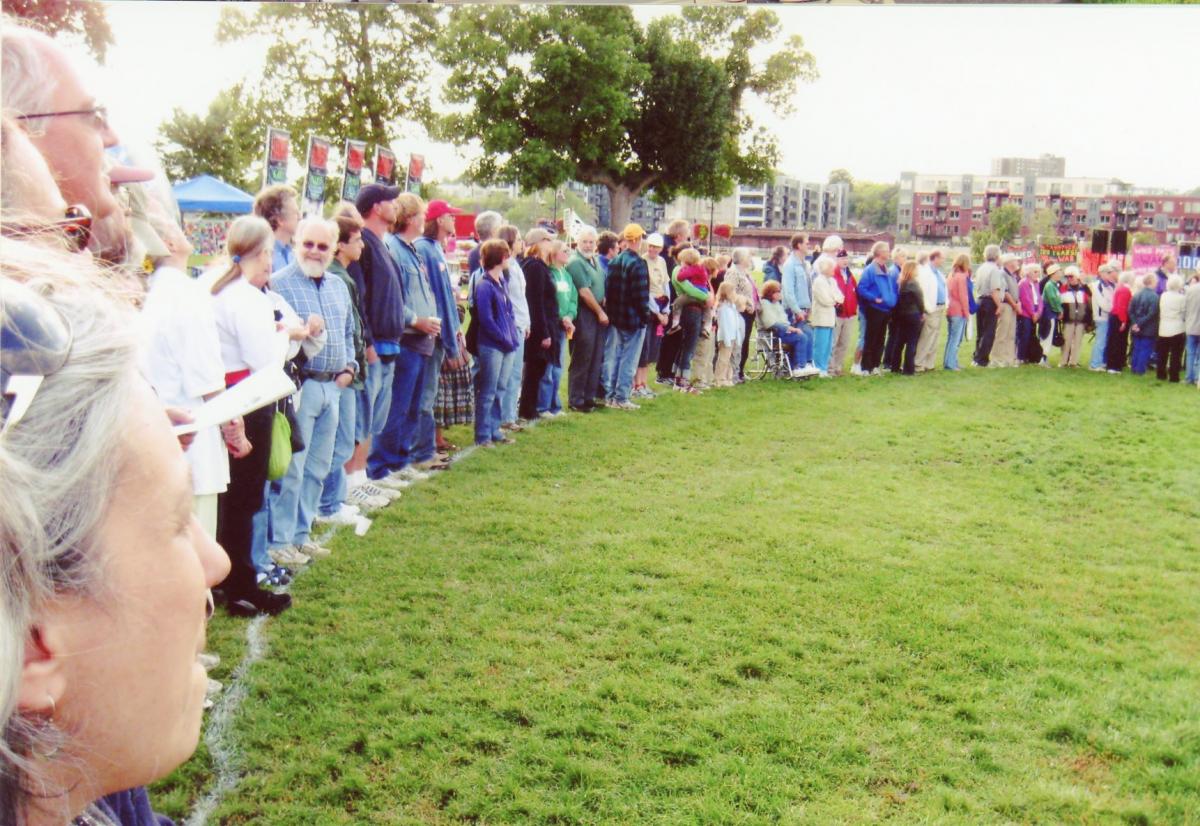 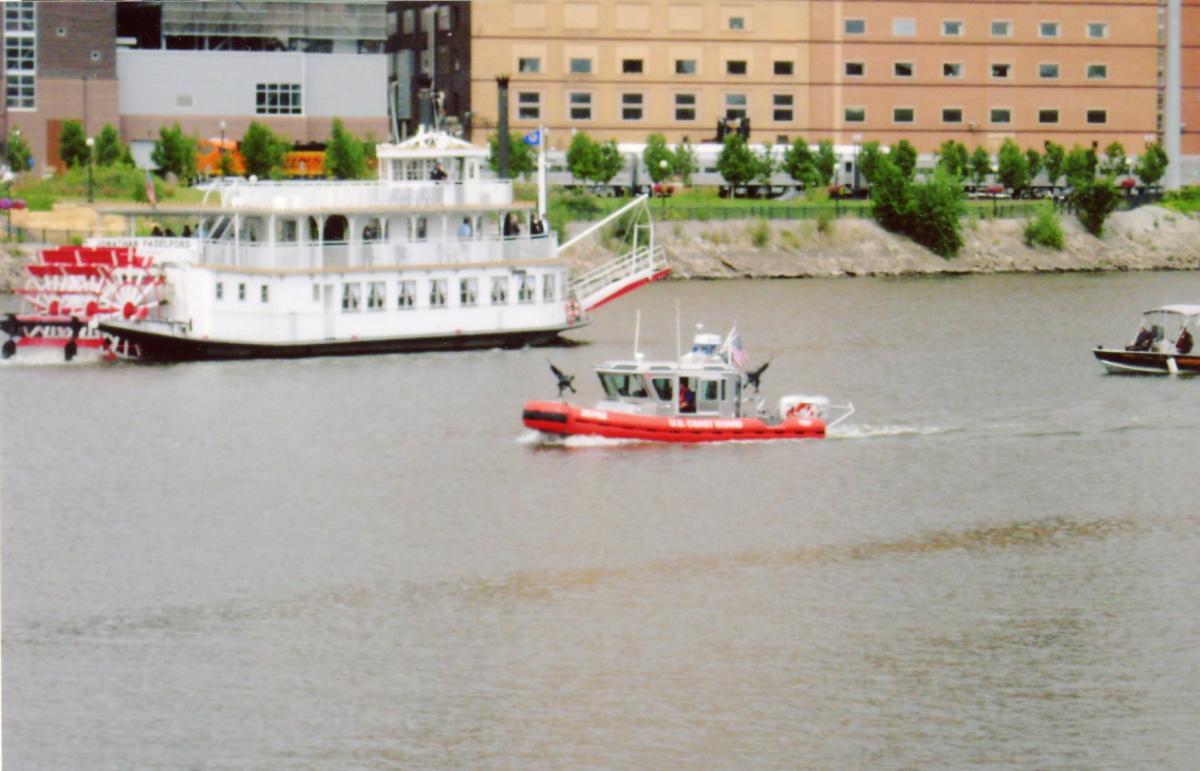 In 2008, Peace Island was scheduled at the time of the Republican Convention in St. Paul.

Problems continue and will continue so long as people are on this planet.

Working towards solutions should still be our objective, for the ultimate good of the planet earth.

Final Thought: Reports on events like this, including mine, are almost impossible to objectively report about. They are full of emotion from one side or another.

But there are other ‘sides’ to the story. When I was scanning the photo with the armed and dangerous police along the parade route, I got to thinking about a burly uniformed Ramsey County officer I was standing behind at the local coffee shop some months ago. I had noticed his shoes and we struck up a conversation about the kinds of shoes police personnel wear. The only thing I remember from the conversation was his comment that his feet hurt when he was on guard during the Republican National Convention…