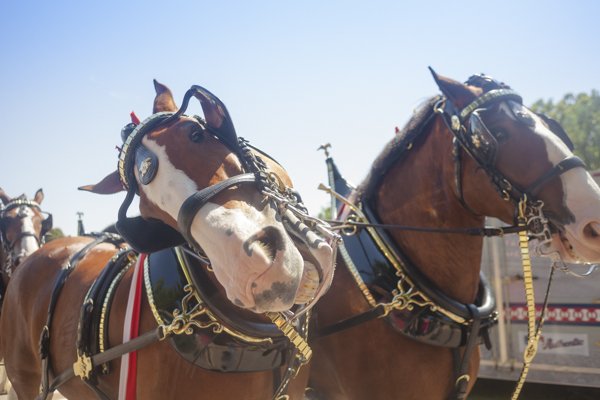 A large group gathered ahead of parade start-time, finding the team’s location at the Fair’s greenhouse parking lot. Throngs of people positioned for family photos and videos in front of the horse team and posting on social media that they were with….the Budweiser Clydesdales. The Clydesdales took all of it in stride, seeming to enjoy the spotlight.

You would think celebrities were on the Fairgrounds by the crowd’s reaction to the 6-foot tall, 2,000-pound horse team. This reaction to the Budweiser Clydesdales is typical and especially at state fairs, said John Nisley, acting supervisor and lead driver of the team. “Even if you aren’t familiar with horses, people know the Budweiser Clydesdales because of the tradition. They are very pretty horses and they stick in people’s minds.” 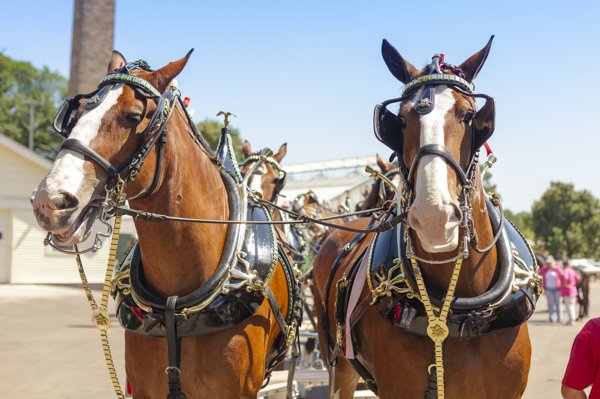 (Above) Five hours of polishing the gold

It was hard not to be in awe of the massive horses and their black leather collars and shiny gold harnesses. Nisley said it takes two people four to five hours to polish the harnesses for each show. Another six people spend a half-hour braiding the horse’s hair, adding roses and ribbons. The special “feathering” feature on the Clydesdale’s hooves are washed as well. Nisley said the horses don’t mind the summer heat as long as they don’t overdo it.

The Dalmatian mascot sitting with the wagon drivers on the State Fair team is named “Clyde,” said Nisley. Each Dalmatian dog on the team tour has a different name. Dalmatians have been traveling with the team since the 1950’s. 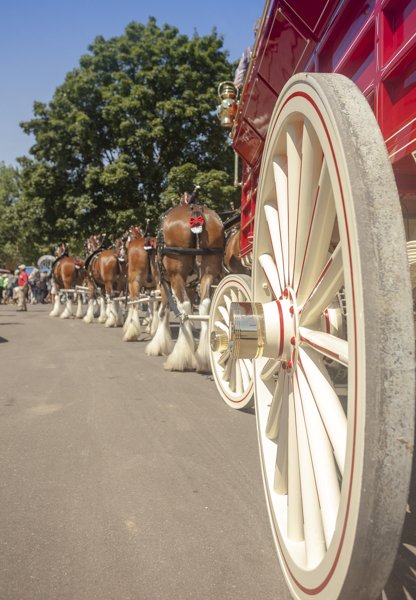 To qualify for one of the traveling hitches, a Budweiser Clydesdale must be a gelding at least four years of age, stand 72 inches at the shoulder when fully mature, weigh between 1,800 and 2,300 pounds, have a bay coat, four white legs, a white blaze, and a black mane and tail. Each hitch horse will consume as much as 20 to 25 quarts of whole grains, minerals and vitamins, 50 to 60 pounds of hay, and 30 gallons of water per day, according to the Anheuser-busch website.

The Budweiser Clydesdales will join the State Fair Mall Parade at 2 p.m. Monday, Aug. 26 and in the AgStar Arena at various times on the 25th and 26th.

The Midwest hitch team will remain in Minnesota after their final appearance at the State Fair for several exhibitions, said Nisley. The team is appearing at the Aug. 28 Minnesota Twins game and at Canterbury Downs Aug. 30-31. 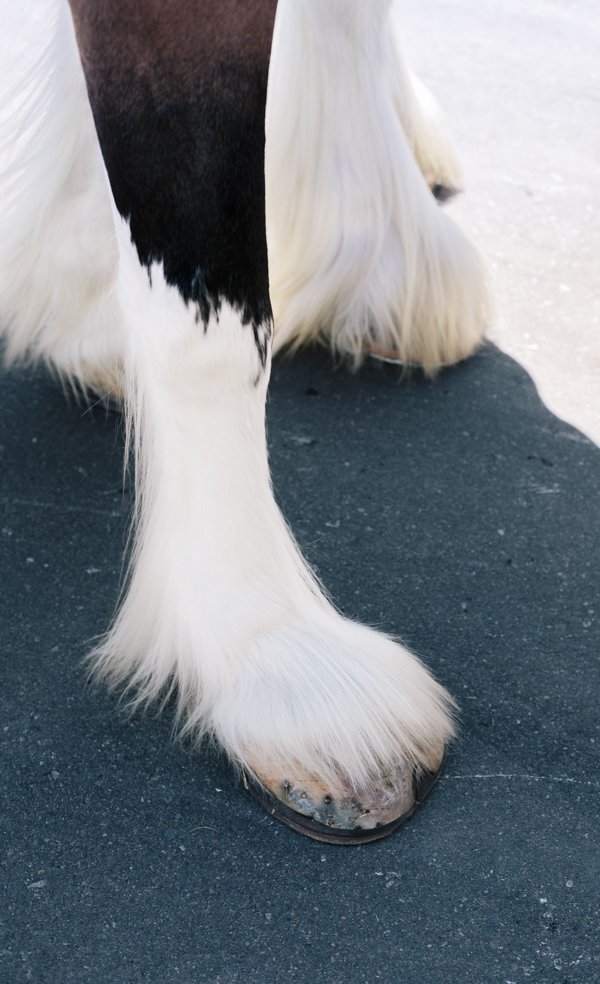 (Above) Clydesdales are noted for their leg and hoof “feathering” feature, which is washed before every exhibition 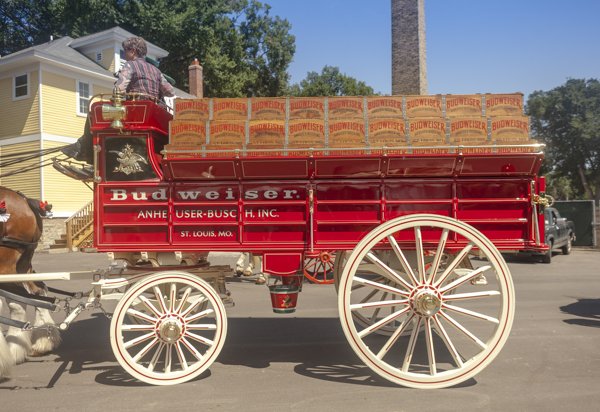 (Above, below) The horses pull an authentic beer wagon 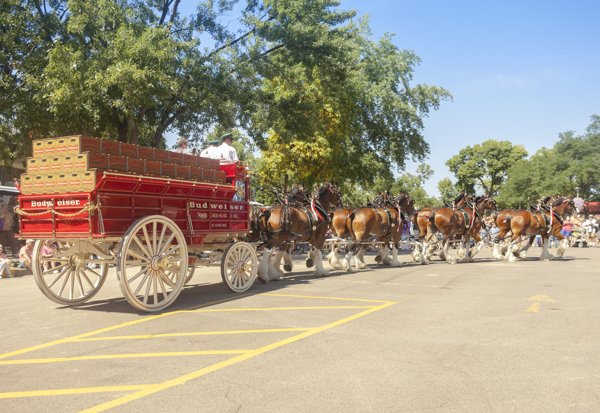 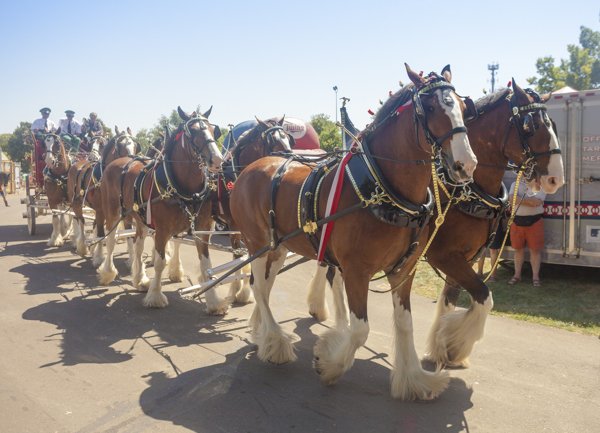 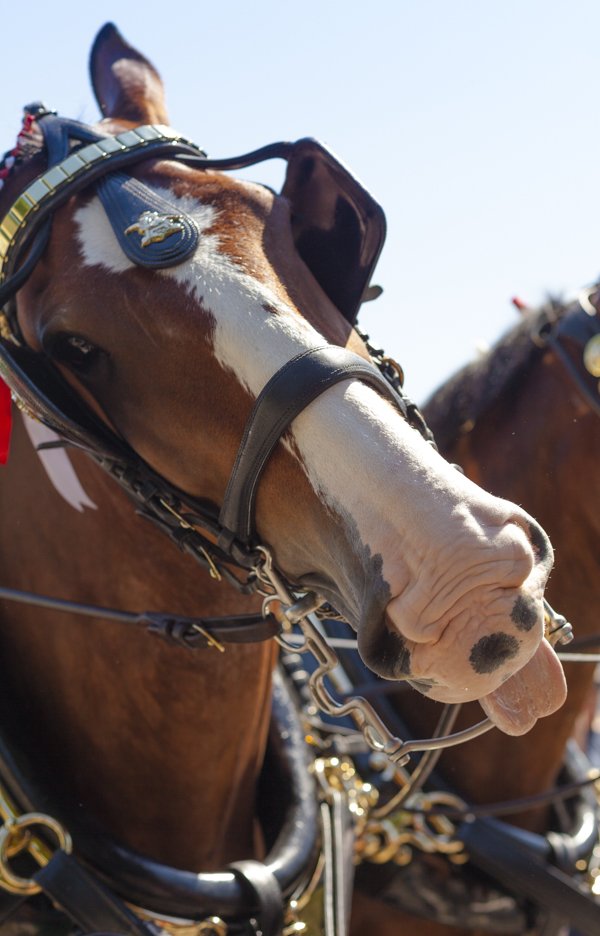 (Above, below) Smiling for the paparazzi 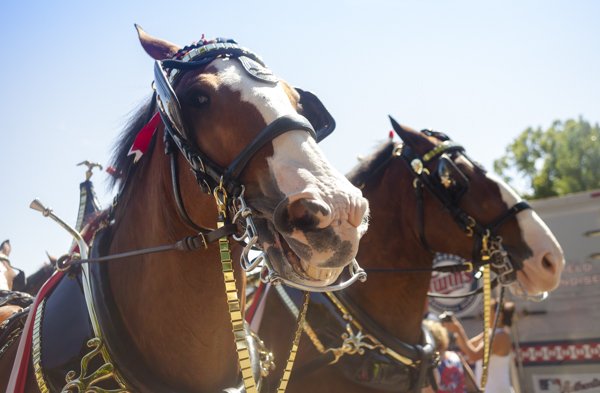 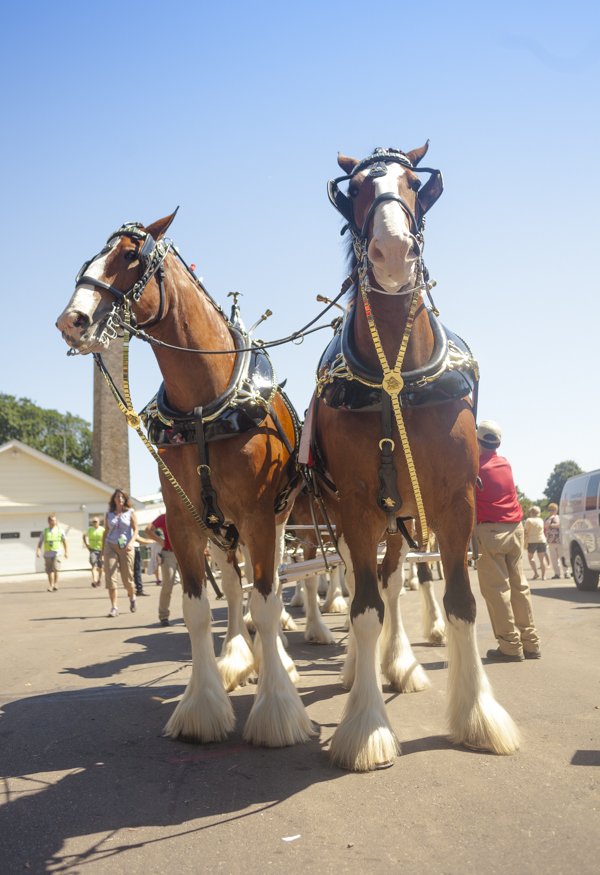 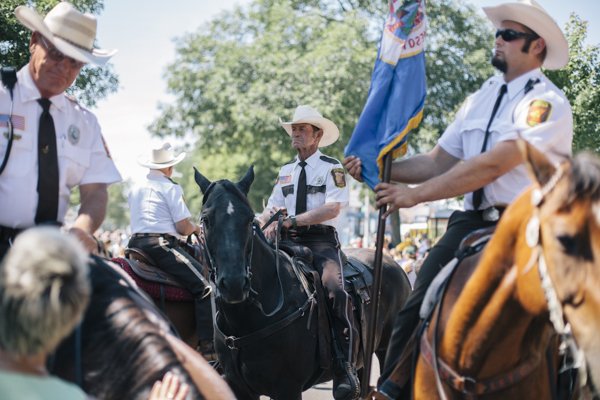