At the exact same time as the disastrous sectarian (religious) war in Syria and Iraq, another religious inspired event, an essentially covert religious “war” of its own, is being marketed in the United States. It began on June 21, Summer Solstice, and runs through July 4: a fortnight involving an annual natural phenomena, a national holiday and a religious initiative. It is quite a marketing package.

Today is the half-way point of the official observance; but it will continue long past July 4th, rest assured.

It is called “Fortnight for Freedom” and its marketing focus is on an alleged heavy-handed federal government coming down on poor beleaguered Christians who are, it is suggested, forced to compromise certain religious beliefs to obey laws with which they disagree, such as parts of the Affordable Care Act (aka Obamacare).

Just one example: being required as a company or employee to dispense birth control to others who desire that particular service when ones believes birth control is a sin. It is, indeed, a clash: a demand of freedom for one; with no apparent attention about freedom for the other whose views might differ.

The initiative seems to make so much sense, if you go no further than the surface rationale. As you think more deeply about the implications, though, it is really a tangled web of deception. “Freedom” apparently only applies to those who can then restrict certain others freedoms. Thus Fortnight for Freedom isn’t about freedom at all, it is about domination and control, imposition of beliefs, only without the bombs and bullets. It is about marketing an idea, a belief, as superior to other contrary beliefs.

Last Friday, the local Catholic Archdiocese newspaper, the Catholic Spirit, had a photo of four earnest looking Bishops on page 11, all intently looking at an iPad above a headline “Bishops focus on religious liberty….” I am Catholic. I get this paper. I know their story…. 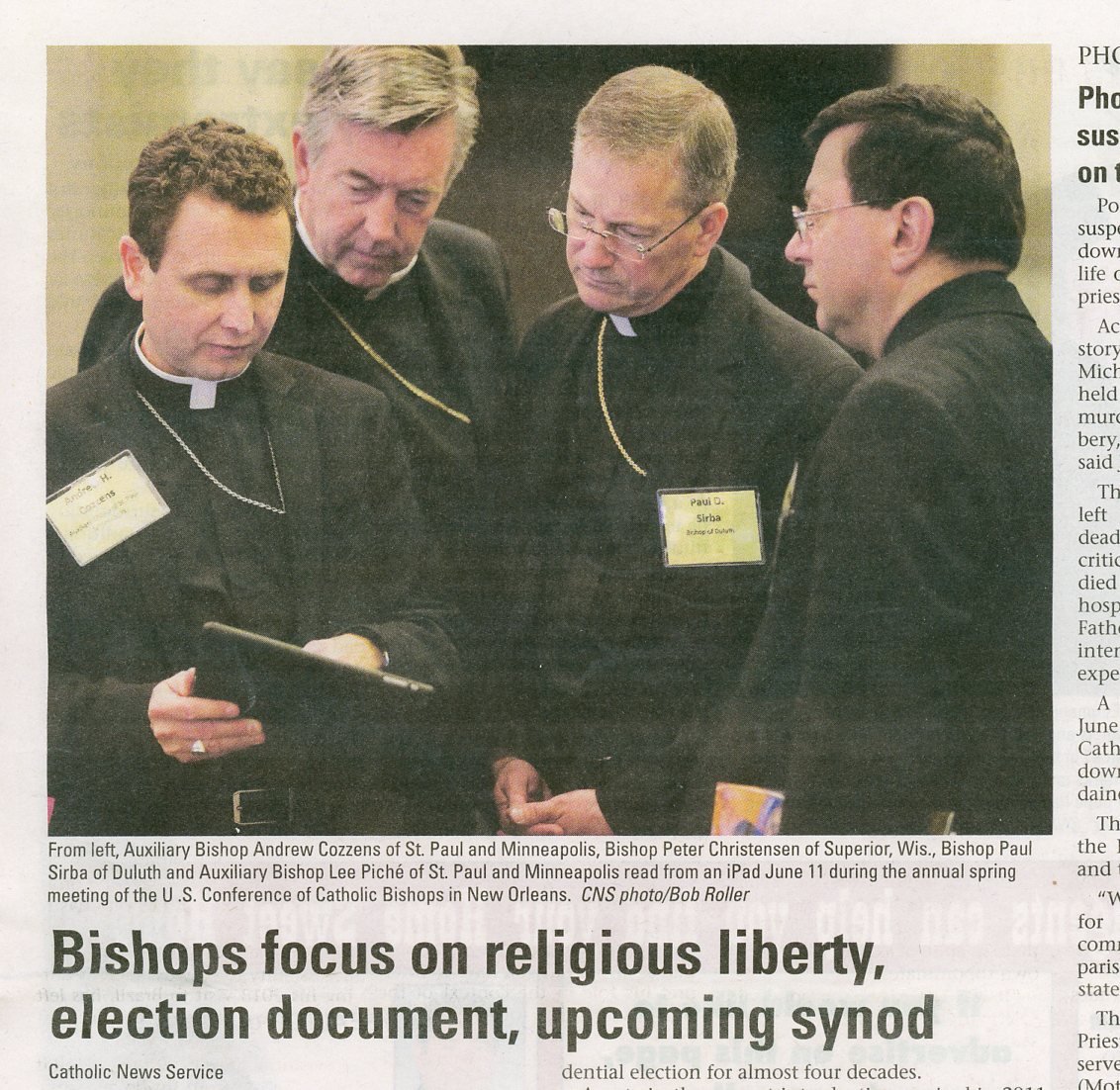 Here is the article that accompanies the above photo: Bishops focus….002

Technology and Media and Words are wonderful…and awful. The words “Fortnight for Freedom” are not even mentioned in the accompanying article; but the timing of the article is no coincidence.

The Bishops of my Church (I am an active Catholic), have far more than enough “freedom”; there is no need for them to demand even more freedom to take away freedom from others who have differing beliefs than they do, including great numbers who consider themselves, as I do, “active Catholic”.

But this is not just a Catholic hierarchical notion. Last Sunday, a good friend gave me a letter “Standing Together for Religious Freedom, An Open Letter to All Americans“, issued by a Southern Baptist entity, whose first signatory is a Catholic Bishop. The few other signers are, it appears, almost all Catholic or Evangelical Christian leaders of one denomination or another.

This is a top down deal between very odd bedfellows; not a bottom up groundswell. When I was growing up, we Catholics avoided Evangelicals. It was probably also true, vice versa: Catholics were Papists, not Christians.

I see no signers of the Open Letter from mainstream Christian denominations, Jews and Moslems, nor the great numbers of people who do not happen to share a particular belief system. They appear to be only Catholic and Evangelical “leaders”.

There is a bottom line for me in this:

There is a certain amount of “freedom” and “liberty” available. Think of a very large soup kettle full of liberty and freedom.

The Founding Fathers of the U.S. had the right idea about “life, liberty and the pursuit of happiness” but even for them, then, the concept was essentially reserved to white men with property (including slaves).

At the same time, our founders purposefully and deliberated separated Church and State, an inconvenient truth for some who now actively attempt to rewrite our national history to fit their version of the facts.

We’re now at 238 years of the experiment called American Democracy. It took nearly 200 of those years, some of them very hard years, to come to some fairly reasonable equilibrium about what freedom and liberty meant in practice: ending slavery; securing the right to vote for women (1920) and others (universal suffrage); more universal rights like the Voting Rights Act, Womens Rights, (1960s) etc.

In each of these cases, and others, there was a need to equalize “power”; to share in the wealth of that container of life, liberty and happiness. Each person has a right to that freedom and liberty.

Notions like Fortnight for Freedom want to turn these around; to redefine or to establish new definitions of what “freedom” and “liberty” mean.

Their intent, under the guise of seeking freedom, is to take it away from some as a benefit to others.

To go backwards, not forwards.