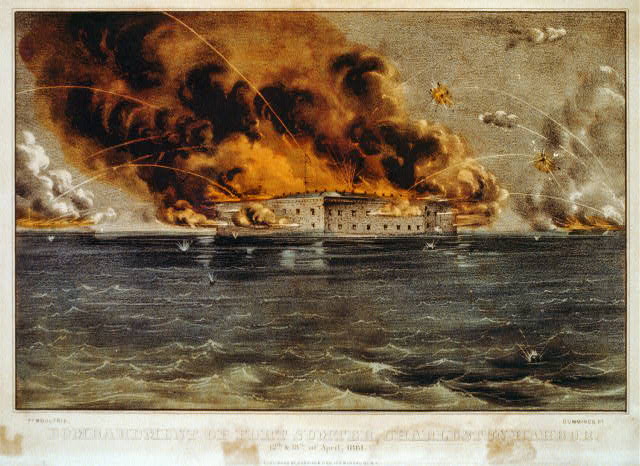 April 2011 marked the anniversary of the two most seminal events in American history.

The first is the anniversary of the battles of Lexington and Concord when members of colonial militia exchanged fire with British troops who’d marched out of Boston to seize stockpiled weapons. Though it would be more than a year before the colonies officially declared their independence, the American Revolution was on.

The other anniversary was of the beginning of the Civil War. With the artillery assault on Fort Sumter 150 years ago this April, what Lincoln termed “the irresistible conflict,” a war that would consume the lives of more than 600,000 Americans ( the equivalent of some five million deaths given our current population), was underway.

We like to think of the Revolution as the defining moment in determining who we are as a people, but a far stronger case could be made for the Civil War. Many of the most intractable issues we struggle with are variations on the issues the Union and Confederacy fought over but did not truly settle during the deadliest conflict in American history.

We had our chance. Though a generally peaceful sort, I hold to the view that, having pursued the war to military success, federal officials should have lined up about 1,000 of the “leading men” of Southern succession against a wall and shot them, then locked up about 2,000 of the second rank of secessionists at some American version of Devil’s Island and thrown away the key. If that had happened the whole post-war history of racial violence and oppression could have been prevented along with the legacy of social and political pathology we still suffer from today.

Hell, if the Union forces had simply executed Confederate Gen. Nathan Bedford Forrest for perpetrating the greatest atrocity ever committed against U.S. troops (the Fort Pillow Massacre) we might have been spared the rise of the KKK, which the gallant Forrest went on to help organize.

Today, one of the most visible legacies of the failure to defeat the Confederacy once and for all is the virulent reemergence of what in America during the first half of the 19th Century became known simply as “The Slave Power.”

The Slave Power was not made up exclusively of  slave-holders and slave traders. The term referred to the utter domination of the nation’s political and economic interests by a cabal of rich planters and merchants profiting off the trade in slaves and slave-produced commodities, along with their henchmen in the courts, executive offices, and legislators at the state and federal level. Think of it as the military-industrial complex of its day.

Leveraging structural flaws in the way the Constitution apportions power among the three branches of the federal government and ramifying those flaws with self-serving procedural rules in Congress (procedures with absolutely no basis in law, merely Congressional “tradition”), The Slave Power – even more so than the extreme rightwing of today’s Republican Party – was able to exercise minority rule over the country.

It used that power to fashion trade and tax laws that favored the cash crop export economy of the Deep South, simultaneously hindering the rise of manufacturing in the North – so much so that the first talk about secession took place not in South Carolina but in New England.

Most of all, The Slave Power used its control of government to cram slavery down the throats of a country and a world increasingly opposed to the very existence of slavery, let alone its spread throughout the United States.

At a time when all other advanced nation’s of the Western World were abandoning slavery and moving to eradicate it by interdicting the trade routes for slaves, The Slave Power was not only able to extend the reach of slavery into Texas and newly formed border states like Arkansas and Tennessee but to entrench legal protections of slavery even in non-slave holding states as well. It accomplished these ends with abominations like the Fugitive Slave Law and the Dred Scott decision, the latter handed down by a Supreme Court controlled by judicial representatives of The Slave Power.

Only when The Slave Power finally overreached – in the process, working itself up into a fever pitch of paranoid extremism – was its hold on the national government broken, and even then, not completely or forever.

The Civil War was not triggered by federal attempts to eradicate slavery in slave-holding states, but by The Slave Power’s fanatical insistence that the federal government guarantee slavery’s spread into new states and territories north of the Mason-Dixon Line. It was in the service of that demand – not to defend state’s rights or even slavery within South Carolina – that secessionists fired on Fort Sumter.

While the forces of The Slave Power never went away – and continued to flout the verdict of the Civil War all during the long nightmare of Jim Crow terror – its revival on the national stage began with Nixon’s Southern Strategy, gained steam under Reagan (who, to his eternal shame, opened his 1980 campaign for the Republican nomination with a speech siding with “state’s rights” that he delivered in Philadelphia, Mississippi, site of the high-profile 1963 murder of three Civil Rights activists), and then under both Bushes.

But this time around the Slave Power only came back into full flower with the election of a mixed-race candidate as President. However flawed Barak Obama might be as a leader (and he is very flawed, indeed) the real source of rage among today’s Tea Partiers and rightwing hate-mongers is not his policies but his skin color.

In their eyes, Obama has upended the proper relationship between the white race and an eternally inferior black race. As is becoming increasingly clear, nothing, not even the continuation of the United States as a solvent nation, can be allowed to stand in the way of rectifying this intolerable lapse.

In 1861, The Slave Power was willing to dismantle the Union by violence in order to protect and advance its malevolent ends. In 2011, its successors are willing to precipitate the economic collapse of the United States – the likely outcome of the failure to raise the federal debt ceiling – in order to advance its cause.