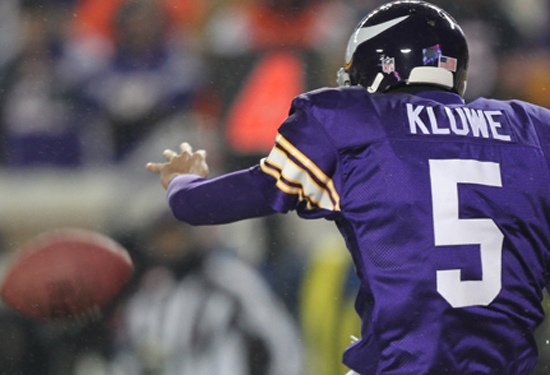 Photo by Freedom To Marry published under Creative Commons License

Former Vikings punter Chris Kluwe announced on Tuesday he will be suing the team after the team failed to disclose the results of an internal investigation prompted by Kluwe’s allegations of rampant homophobia in the team’s management.

At a press conference at the IDS Tower in downtown Minneapolis on Tuesday, Kluwe chastised the Vikings for failing to release the report on an investigation into homophobia.

“It’s transparently obvious to me that the Vikings are covering up the truth,” said Kluwe’s attorney Clayton Halunen. “We have no choice but to litigate at this point. Kluwe willingly cooperated with the Vikings’ investigation – all he ever wanted was for the truth to come out.”

On Jan. 2, former Viking punter Chris Kluwe made some startling claims in a post on Deadspin:

We were laughing over one of the recent articles I had written supporting same-sex marriage rights, and one of my teammates made a joking remark about me leading the Pride parade. As we sat down in our chairs, Mike Priefer, in one of the meanest voices I can ever recall hearing, said: ‘We should round up all the gays, send them to an island, and then nuke it until it glows.’ The room grew intensely quiet, and none of the players said a word for the rest of the meeting. The atmosphere was decidedly tense.

The Vikings denied that Kluwe was fired because of his outspokenness and initiated an outside investigation into Kluwe’s claims.That investigation has been completed, but now the Vikings say they will not release the results. According to KSTP, a team insider says the report could be damaging and embarrassing to the team.

“It’s outrageous to me that the Vikings would choose to hide the facts of the investigation from me and from their fans,” Kluwe said at the press conference. “Minnesota Vikings fans are the real losers in this sad affair. The fans deserve to know that what I said about Priefer and the way the Vikings let me go was the truth. I was persecuted and then fired for standing up for what I believe in, all because some small-minded, bigoted people think that homophobia is okay in the NFL. It is not okay, and now it seems like we’ll have to go to court to force the Vikings to admit that.”

Kluwe said the report will vindicate his claims.

“Not only did I say that this is what happened but this is something that happens in work environments across the country and if we want to change that then we need to know that it happens and how we can change that? Sweeping it under the rug and keeping the report private doesn’t help us do that,” he said. “It’s important for everyone to see what’s there. Yeah, it will probably hurt but the only way we are ever going to fix it is if we acknowledge it and make changes, systematic changes, all the way through the organization up through management and say we not going to tolerate this anymore, we are not going to tolerate people being discriminated against.”

Kluwe’s attorney Halunen acknowledged that Kluwe and the Vikings were close to a $1 million settlement over his firing, but the latest actions have made that less likely.

“One of the terms of that was rather than Chris taking any money, he was going to — under his name — donate a million from the Vikings to charities that support LGBT causes and that’s very unfortunate because that money could have done a lot of good work,” said Halunen. “But people in the beginning of this have suggested that Chris is in it for the money.He’s never been in it for the money. He’s not going to take any money from it and
the money is going to go to charity.”

The Vikings released the following statement in regard to Kluwe’s threat of a lawsuit:

Since Chris Kluwe’s allegations first appeared in Deadspin on January 2, 2014, the Minnesota Vikings have taken them very seriously, which is why the team immediately retained former Chief Justice of the Minnesota Supreme Court Eric Magnuson and former U.S. Department of Justice Trial Attorney Chris Madel, two partners of Robins, Kaplan, Miller & Ciresi, L.L.P. (RKMC), to perform an independent review of these allegations. Magnuson and Madel were asked to thoroughly and comprehensively investigate three particular allegations by Kluwe and Kluwe’s counsel:
1) Special Teams Coordinator Mike Priefer made offensive and insensitive remarks in Kluwe’s presence.
2) Representatives of the Vikings had knowledge of these comments prior to the Deadspin article publication on January 2, 2014.
3) Kluwe’s activism was the reason for his release from the Vikings on May 6, 2013.
Magnuson, Madel and others spent nearly six months conducting an exhaustive investigation. After the Vikings were given the investigative materials from Magnuson and Madel, in order to further maintain objectivity and integrity, the team engaged a nationally-prominent law firm – Littler Mendelson P.C. – to evaluate employment law matters and provide findings and recommendations to the Vikings. Those recommendations are to be provided to the team this week.
As Magnuson and Madel confirmed today, the Vikings have never made or broken promises as Kluwe and his attorney Clayton Halunen have claimed. The Vikings have also never engaged in the various comments that Kluwe and Halunen have provided to the media over the past six months. This Thursday, July 17, the team has a meeting scheduled between Halunen and Vikings attorneys to discuss next steps.