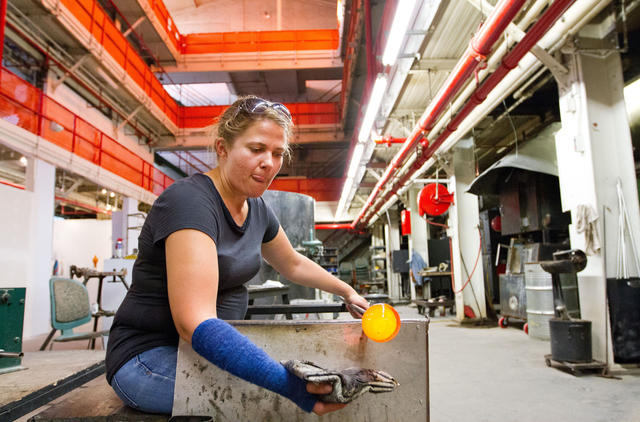 Charissa Peterson shapes a bulb of molten glass into a bowl Thursday at FOCI Minnesota Center for Glass Arts. FOCI, located in a building complex that used to be a General Mills research and development complex, is the only open studio for glass blowing in Minnesota where hobbyists can take classes and rent studio time. (Photos by Marisa Wojcik)

What happens when a corporate giant moves out of its giant, corporate space? Quite a bit in the case of General Mills leaving its research and development complex in Northeast Minneapolis.

Over the years, the 14 buildings that were once the fiber of corporate development have become the work spaces for all kinds of artists.

“There’s a lot of overlapping and collaboration, even if it’s not direct,” said Todd Cameron, a glassblower who works in the complex.

In addition to the glassblowing studio, there is a chocolatier, a motorcycle workshop, a violin shop, woodworking workshop and more at the 2010 Building, located on Hennepin Avenue and 21st Street. An eerie maze of underground tunnels connects all the spaces.

Larry Homstad, a physicist, bought the complex for cheap back in 1989. He needed a place with plenty of electrical power so he could conduct his experiments.

While much has changed, a few things still hold over from the complex’s General Mills days. Wheaties orange and Cheerios yellow cover the walls, while exposed brick and piping, giant garage doors and high ceilings maintain an industrial feel.

Homstad, older and ready to retire, just sold the property. Last Thursday, artists and their loved ones gathered in the sculpture-filled grotto between the buildings to celebrate time well spent. Many of them said they aren’t worried about the new owners and expect little to change.

Typically, production artists who need workshops to make a lot of goods flock to the 2010 Building. But Asia Ward, an artist-in-residence at the Science Museum of Minnesota, uses the space to make her unique fine art.

Ward bends aluminum to make landscapes that emulate things like rivers, caves and the space around her parents’ house.

The high ceilings at the 2010 mean that Ward can stack her large, light pieces up high. The built-in support structures make it easy for her to lift and mount her materials.

Ward also appreciates the atmosphere at the 2010.

“I’ve been out of college since 2000, so it’s been 12 years of trying to find a similar atmosphere of people building all the time and not bogged down by life and money and stuff like that,” Ward said.

“It’s nice to have other artists working all the time.” 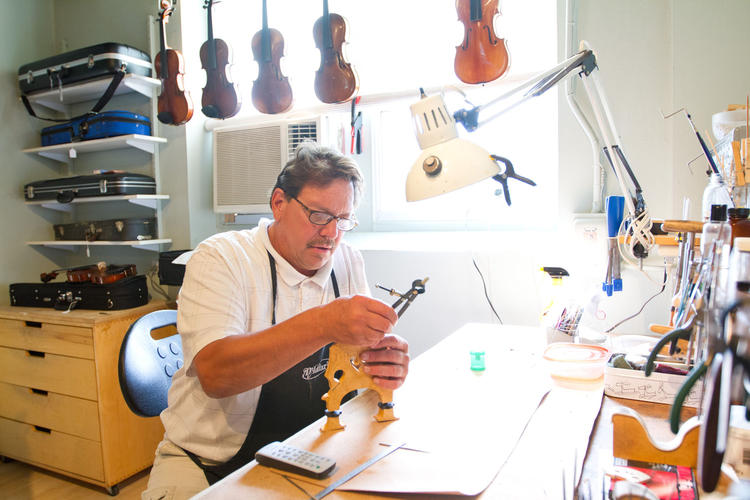 Luthier Milo Tupy adjusts the bridge of a double bass Friday at Quinn Violins, another building part of the 2010 E. Hennepin Ave. building complex. Quinn Violins sits one floor below what’s been rumored as having once been “Betty Crocker’s kitchen.” 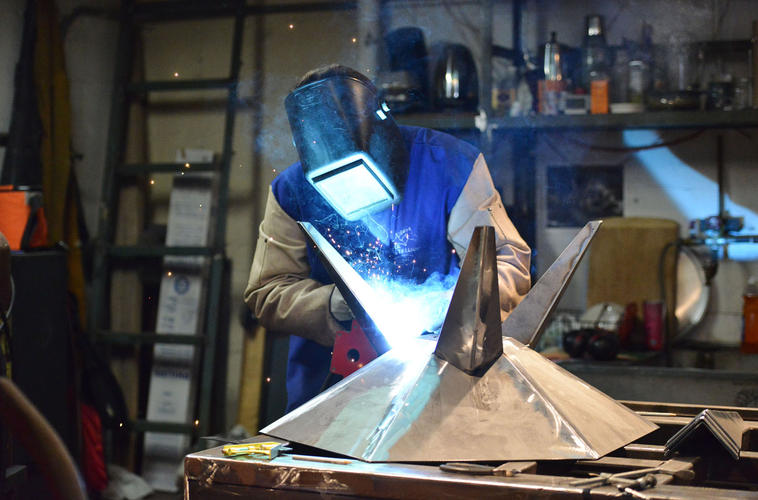 Sculptor and fabricator Asa Hoyt welds legs onto an outdoor fireplace unit Monday in his studio space at 2010 E. Hennepin Ave. Hoyt collaborates with other artists in the building on specific projects. 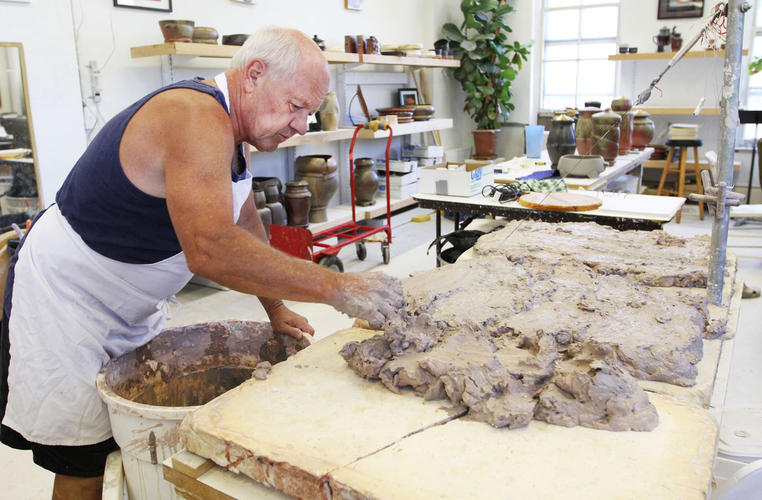 Pottery artist Chuck Solberg preps a batch of clay in his studio Monday. Solberg moved his studio to 2010 E. Hennepin Ave. two years ago after he was forced to move out of his space at Raymond and University avenues due to light-rail construction.