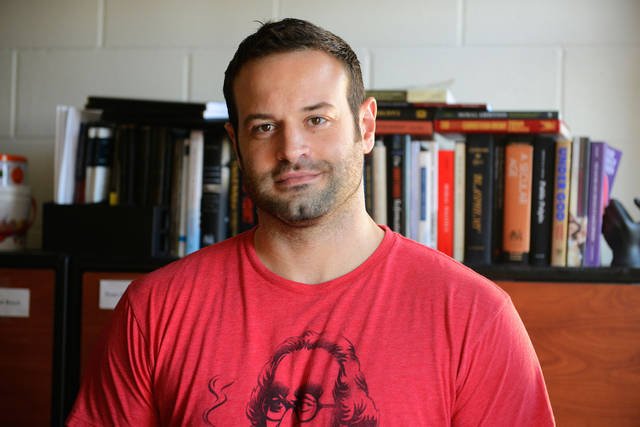 (Photo by Zachary Bielinski) University graduate Rob Stewart is attempting to regain the right to vote for this election despite having a felony. Failed state legislation last session would have granted voting rights to people with criminal records immediately after they leave prison.

Robert Stewart hasn’t been able to vote since 2006, a right he lost because there’s a felony on his record.

But for the past several years, the third-year sociology graduate student has been fighting to regain his voting rights.

“It’s encouraged me to be involved,” he said, “because I have no other way to be involved in the political process, other than through advocacy.”

While a bill to restore voting eligibility to many Minnesotans with criminal records when they leave prison made headway in the last legislative session, the measure failed to make it onto the floor of either chamber. Now, some University of Minnesota students are working to further the rights of those with criminal backgrounds.

“I think [people with criminal records] should be welcomed back into the community,” said associate sociology professor Joshua Page.

He said he believes the public should strive to integrate former convicts back into society, rather than exclude them.

Stewart is optimistic that groups like the Minnesota Second Chance Coalition, of which he’s a member, will help a similar bill become law in this spring’s session.

“I will definitely be reintroducing it,” Dehn said.

Stewart blamed the bill’s death last session on “election-year politics,” in which he said the tumultuous political environment makes it hard to get anything passed.

Dehn also intends to propose legislation that would allow people with criminal records to have a formal way of verifying good behavior when applying for jobs.

“We all know someone who has had a run-in with the law,” he said. “I think the arc has begun to bend. There are a lot of people out there who are doing incredible efforts to address how we talk about criminal records.”

“We’ve had many, many U of M students who’ve volunteered to participate in our events,” she said. “[Research from] the U has been essential in our understanding of the issue.”

Members of MSCC will door-knock throughout the state this weekend to reintroduce voters to the issue as elections near. Walker said the group also plans to devote its annual lobbying day — which will likely be in late January or early February — to the issue.

University organizations like the school’s chapter of the Minnesota Public Interest Research Group have also taken an interest in this issue.

Paige Varin, co-chair of MPIRG, said the group worked extensively last year to forward legislation known as “Ban the Box,” which took effect Jan. 1. The law prevents Minnesota employers from asking whether a potential employee has a criminal background on initial applications, although companies can perform a background check later in the hiring process.

She said she hopes the group will continue advocacy for former convicts this year, adding that she thinks it’s likely voting rights will be a focus.

Mark Haase, coordinator of Restore the Vote-Minnesota and co-chair of Minnesota Second Chance Coalition, said pursuing increased rights for those with criminal records helps society as a whole.

“There’s a better understanding that the more we can support people — despite the fact that they’ve done something wrong — the more we’re going to improve public safety and have stronger communities,” he said.