One life, Laramiun Byrd’s, just 20-years-old at the time, ended abruptly with four gun shots – three to the chest and one to the head. The shots were fired from a then 16-year-old Marlon Green, who later changed his name to Oshea Israel. Israel’s life was the second to be forever altered by the ill-fated encounter. The third life that was changed was that of Mary Johnson, mother of Byrd. But the way in which Johnson dealt with the tragic loss of her only son has positively impacted the lives of many others – most surprisingly, Israel’s.

Still mourning, and feeling little relief following the trial of Israel, even though he was convicted of her son’s murder, Johnson said she read a poem, “Two Mothers” that began to offer her comfort, but more importantly a mission. Johnson said the poem is about two mother’s grieving the losses of their murdered sons. It’s revealed that one of the mothers is that of Jesus Christ and the mother of Christ said to the other mother, “Tell me the name of the son you love so, that I may share with your grief and your woe.” The second mother reveals she is the mother of Judas, the betrayer of Christ.

“I realized I had a great purpose,” said Johnson. “I want mothers of murdered children and mothers of children who have taken life to come together.”

Thus, Johnson founded From Death to Life, an organization dedicated to ending violence through healing and reconciliation between families of victims and those who have caused harm. But Johnson knew if she were to be true to her mission, she had to make peace with her son’s killer.

“I reached out to Oshea (through the staff at Minnesota Correctional Facility-Stillwater, where Israel was housed) and requested a meeting and he said, ‘Absolutely not,’” said Johnson. “But I didn’t give up. I waited nine months to ask again.”

Johnson’s second request was greeted with acceptance and in March of 2005 the two met face to face inside the prison. The meeting was not anything for which the two could be totally prepared – even with hours of mandatory counseling beforehand.

“I was walking up the ramp halfway up at Stillwater and I just broke down and I said, ‘I cannot do this,” Johnson recalls. “But my friend, Regina Irwin, who went there with me for support pushed me up.”

Finally inside, Johnson said she was stripped of her belongings and she pleaded with a staff member for some lotion. The staff member obliged. Deeply rooted in faith, Johnson began to apply the lotion and when she read the name on the tube of lotion, she took it as a sign. The imprint on the lotion read, “Beyond Belief.”

Armed with her newfound strength, Johnson was ready to meet with Israel.

“Initially I didn’t want to meet her (Johnson) because I was in the middle of a transition,” said Israel. “I was still blaming everyone but myself for what happened and I figured all she wanted to do was come cuss me out and fuss at me.”

That was not the purpose for Johnson’s visit.

“Oshea and I shook hands and I told him, ‘I don’t know you, you don’t know me, you didn’t know my son,’” said Johnson, who said prior to the shooting her son and Israel had not met. She went on to say, “We need to lay a foundation and get to know each other.”

The two spent two hours getting to know each other; laying a foundation.

“At the end of the meeting he (Israel) asked me if he could hug me and to both of our surprises, I said, ‘Yes,’” said Johnson. “I was so hysterical I began to fall and (Israel) had to hold me up.”

As the two embraced, Johnson said Israel whispered to her, “Ma’am, I believe you are going to be the person to help me to cry.”

“At that moment, I could physically feel something in me,” said Johnson. “At that moment all the hatred and bitterness was gone.”

Israel said the meeting was something he needed to continue his transformation into becoming a better person.

“As a man I figured I owed it to (Johnson) to tell her I regret the incident and I’m sorry for my actions,” said Israel.

Israel has since been released from prison and the kinship between the two has blossomed – so much so that upon Israel’s release, Johnson hosted a “Welcome Home” party for him.

“I wanted him to know that people out here cared about him and wanted to see him successful,” said Johnson, who said about 30 people – most whom had never met Israel – attended the party.

One of the attendees, Brian Mogren, who owns the building in which Johnson lives, was so affected by the bond of Johnson and Israel that he offered to rent an apartment to Israel – directly next door to Johnson. The two have been neighbors for a year and a half.

Though Johnson and Israel have formed a bond, Constance Styles, in a similar situation as Johnson had not yet come to the point of forgiveness to befriend her child’s murder. Styles’ son, Dante Gray was 16-years-old when he was killed Oct. 2, 1994, by a stray bullet.

“(The shooter) was a friend of my son,” said Styles. “He heard the story on the news and turned himself in.”

And though the shooter owned up to his deed, Styles struggles with forgiveness. “I’m not at that point yet,” said Styles. “It’s hard. You say with your mouth you forgive, but I don’t know if I fully there yet.”

Styles finds comfort being a part of the group From Death to Life. 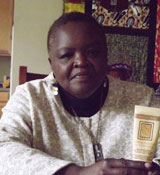 “Having other mothers who share the same heartache and agony is different than others saying, ‘I know what you are going through.’ How do you know?” said Styles. “Time doesn’t heal all wounds. I still mourn for my son, but this group offers comforting.”

Through From Death to Life, Johnson and Israel tour the country sharing their story at various prisons and other speaking engagements. Through the relationship Israel and Johnson have formed, Israel said he has found something he has been looking for since that cold day in February of 1993.

What did Israel find?