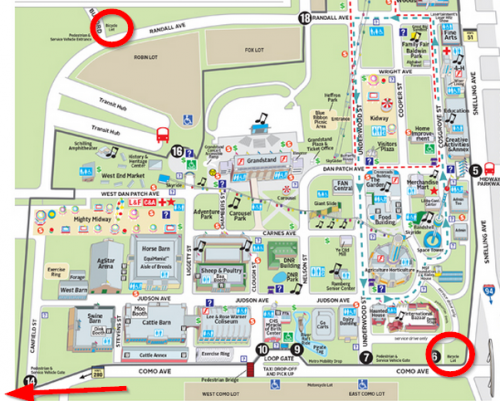 Every year I remember the loveliness of the bike ride to get to the state fair. And then I’m reminded of the horror that is the last one tenth of one mile to the bike corral. This is particularly problematic for anyone arriving on the U of M Transitway, which is the obvious way to ride there from Downtown, Dinkytown, or most of south Minneapolis.

Using the iconic Great Minnesota Get-Together map, the red arrow on the bottom is where someone biking from Minneapolis will pop out. The red circle at the top left is the bike corral that it makes sense to get to. There’s another bike corral on the bottom right, but accessing it requires navigating the gridlock on Como – not recommended! (There are usually lovely bike lanes on Como, but they are replaced by a car lane during the State Fair. We wouldn’t want anyone to get around the congestion on a bike, would we? That’d be cheating.)

Remembering this, I contacted the State Fair to ask, “How can bikes get from the Transitway to a bike corral? You have removed the Como bike lanes and put cars in the way. And you closed the bus + bike share lanes to be only buses. Thanks for the bike corrals, but… how do you get to them?”

“Thank you for your email and interest in the Great Minnesota Get-Together. If you are on the west end of the fairgrounds, I would bike Cleveland north to Buford. There is a bike lot on Buford and Randall Ave. Then, walk from the Buford bike lot to Gate 16 or 18 to enter the grounds. Here is a link to a fairgrounds map.”*

Here is the route they suggested. The challenging stretch is from Como to Dan Patch, circled in red. their recommendation for connecting is 900% longer (.9 miles) than the “rational” route (.1 miles). It’s also hillier and forces you to ride in a traffic lane on Como, which is choked with State-Fair-induced congestion. While Como USUALLY sports a lovely bike lane, they hide it for the State Fair every year. It’s no 8 minutes, given navigating Como. 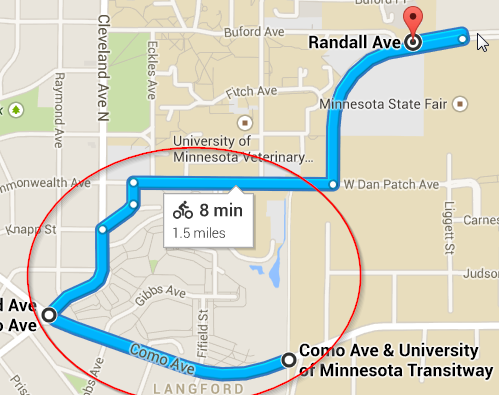 For comparison, here is the route that makes sense: 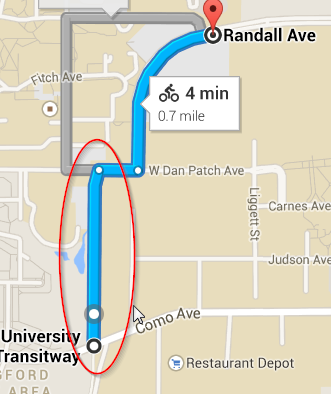 Now, an extra .8 miles doesn’t seem like much, but how about we look at an analogous and possibly easier-to-relate-to driving example. It’s not perfect, as drivers are more likely to go out of their way to get to a destination than people who walk or bike are, but it’ll do. I chose a downtown Minneapolis example, as it’s also congested and it’s an area I know.

I chose getting from the 394 exit in downtown to the Minneapolis Central Library. Here’s the route that makes sense: 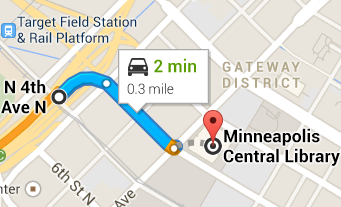 And, here’s an alternative route that’s 850% further, approximately equivalent to the State Fair’s lengthier suggestion. If you contacted the library for instructions and they directed you via Hennepin, with a scenic visit to Loring Park, and back through downtown, would you think they wanted you to come? 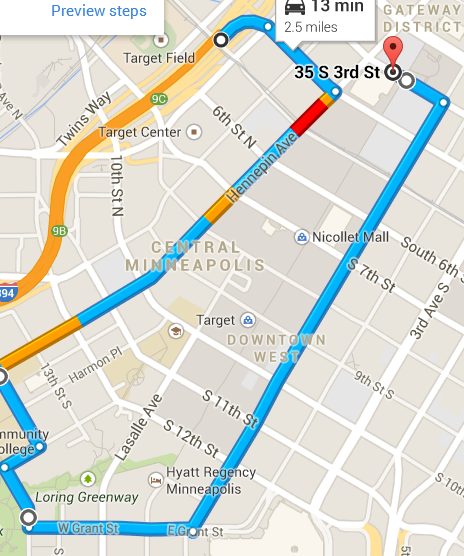 Maybe I’ll go to the State Fair, some other year when the Fair creates bike-access to their bike corrals for Minneapolitans.

*They didn’t mention the final humiliation. They require you to dismount and walk your bike the last way into the corral.