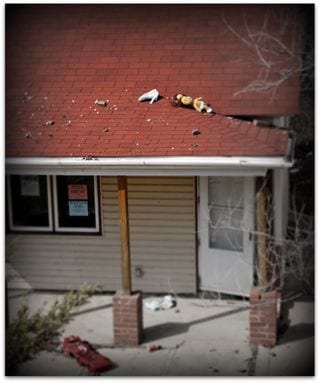 We have lived on the same block in the Upper Town Neighborhood of Saint Paul for the past twenty-eight years; twenty-one of those years in our almost 152-year-old home. It should be apparent that we love our neighborhood.

Daisy the long-legged beagle likes to take me on walks. Sometimes we walk down on the Upper Levee part of Saint Paul’s River Park; other times we may visit the off-leash dog park in Lowertown but sometimes we just walk around the neighborhood. I enjoy our neighborhood walks the most; there’s always neighbors and neighbors’ dog-people out for Daisy and I to chat with and it gives us a chance to catch up on the neighborhood news.

It was on our neighborhood walks in the past several months that I noticed the plague of foreclosure had finally hit our little corner of Saint Paul; we had escaped the first big wave of foreclosure. At last count there have been four in a two-block radius and every one involved a duplex; and only one of those was owner-occupied, the rest were absentee-landlord investment properties.

Some of our neighbors are celebrating the placarded problem properties as “problem solved,” as the trouble-making tenants are gone. Gone too are the tenants who caused no problem; forced out by the foreclosure.

As the number of foreclosures increase property values decrease.

We can expect these placarded buildings will remain vacant for a long time.  Foreclosures hurt.

But there is hope.

Our neighborhood is occupied mostly by people who bought their homes not as an investment, but as a place to make their home. They have rehabilitated and restored ancient homes, some spectacularly so.

There are absentee-owners who have improved and maintained their homes and buildings making them desirable for renters.

Many moved in when the neighborhood was in decline and through their efforts have made this near-downtown area a desirable place to live.

And finally one of the four duplexes has been sold and is now owner-occupied.