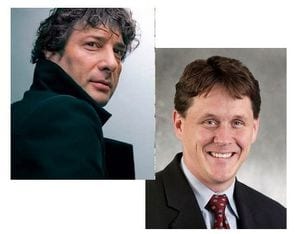 May 4th be with you: the pencil-neck strikes back

A friend recent said, “Don’t mess with the creative classes.”

Matt Dean, who shared a case of political Tourette’s in today’s Star Tribune when he called science fiction writer Neil Gaiman “pencil-necked little weasel who stole $45,000 from the state of Minnesota,” learned that today.

Laurie Hertzel, who blogs On Books in the Strib’s entertainment section, posts in Gaiman tweeting long and loud about being on “GOP hate list”:

Wow. did Matt Dean really say that? Did he really call Twin Cities writer Neil Gaiman a “pencil-necked little weasel” who “stole $45,000 from the state of Minnesota”? Did he really say, on the House floor, that he hated him?

Good question. It may be that Majority Leader Matt Dean only said it in an interview with the Star Tribune for the article, GOP targets Legacy funds for MPR, arts, but say it he did. The bill, introduced by Dean Urdahl (R-Grove City) was discussed yesterday by the House Legacy Funding Division panel:

In an unusual move on Tuesday, Rep. Dean Urdahl, who chairs the House Legacy Funding Division panel, introduced a new version of a Legacy amendment funding bill that would remove specific money recommendations for the state’s influential public radio network and other cultural organizations and said they would instead compete for grants.

Urdahl, who struggled at times during a hearing to explain the sudden move, said it was partly the suggestion of Republican legislative leaders.

I listened to the audio recording of the discussion by the panel, and Dean’s junior high taunt isn’t there. But Gaiman learned of the remark, wherever it was uttered, and fired back, Hertzel reports:

On Twitter, Gaiman fired back. “Sad &  funny. Minnesota Republicans have a ‘hate’ list. Like Nixon did. I’m on it,” he posted this morning, followed by, “It’s strange watching a grownup high school bully in power. But the bully vocabulary remains the same.”

A few minutes later, “Any nice, sane Minnesota Republicans reading this, please vote for someone who isn’t a bully with a hate list next time.”

And, a few minutes after that, “Bizarrely, the twit who called me a pencilnecked weasel has posted my blog on his and claims copyright on it.” Gaiman then posted a link to Dean’s blog, which very quickly crashed. Gaiman tweeted one more time to apologize.

Ah, the mark of a truly charitable guy. But there’s more.

Targeting arts and MPR but not libraries (hint: one was Gaiman’s host)

Looking over the bill and reviewing the source of funding for Gaiman’s visit, it looks like Dean’s remarks are intended as red meat for the art-hating part of the GOP base. and perhaps a stick to make Dean Urdahl stay in line.

Here’s why. Gaiman’s pricey visit came from Legacy funding that goes to the regional library system; in the new bill, it’s channeled via the Department of Education:

4.22These amounts are appropriated to the
4.23commissioner of education for grants
4.24allocated using existing formulas under
4.25Minnesota Statutes, section 134.355, to the
4.2612 Minnesota regional library systems, to
4.27provide educational opportunities in the arts,
4.28history, literary arts, and cultural heritage
4.29of Minnesota. These funds may be used
4.30to sponsor programs provided by regional
4.31libraries or to provide grants to local arts and
4.32cultural heritage programs for programs in
4.33partnership with regional libraries.

See anything there about making the funds part of a competitive grant process? Nope? Neither do I. This isn’t the first time Republicans have made Gaiman’s visit a whipping boy for all arts funding.

Mike Parry did it back in late February, only then the Waseca senator confused arts dollars from the general fund with Legacy funding (see end of post in the link). Now Dean uses it as the reason to make both grants to public broadcasting and grants administered through the Art Board competitive.

Phoenix Woman has another take in Neil Gaiman Is Worth 45,000 Matt Deans.

I suspect there may be yet another subtext in Matt Dean’s peculiar ranting: keeping poor Dean Urdahl in line by waving a bully stick at the Grove City Republican:

Bluestem readers may remember that Urdahl faced party purity pressure from the banch of the GOP that drove popular state senator Steve Dille into retirement in SD18. Urdahl himself wasn’t granted the Republican nod by the local endorsing convention until the third ballot.

Yep, I think Gaiman had sniffed out an essential part of Matt Dean’s character when he tweeted:

“Any nice, sane Minnesota Republicans reading this, please vote for someone who isn’t a bully with a hate list next time.”

Minnesota House Majority Leader Matt Dean of Dellwood is apologizing for calling author Neil Gaiman a “pencil-necked little weasel,” but isn’t backing off of his criticism for Gaiman collecting a $45,000 speaking fee from state taxpayers.

Dean originally made the comment while talking about changes to how the state’s Legacy Funds for the arts are distributed. Dean says he’s sorry he called Gaiman a name but thinks he shouldn’t have taken the fee for speaking at the Stillwater library last year.

“My mom is staying with us right now because my wife’s out of town,” Dean said. “She was very angry this morning and always taught me not to be a name caller. And I shouldn’t have done it, and I apologize.”

CP: All right. Well thanks for speaking about this. We’re trying to reach Matt Dean too to see what we can learn from him.

NG: See if you can get a quote from him! Find out why he hates me! Hate is such an amazingly strong word.

I feel like this is one of those moments where I’m going to discover that I stole his parking space, or had sex with his sister and didn’t know.

There’s also the really sort of weird kinky republican thing of maybe he likes me, and this is some sort of weird cry for attention. The whole “I hate you, you’re a pencil-neck” thing, and then he’ll try for some sort of reconciliation and then the next thing you know he’s putting his hand on my leg. It’s just going to be weird. It could be awkward.