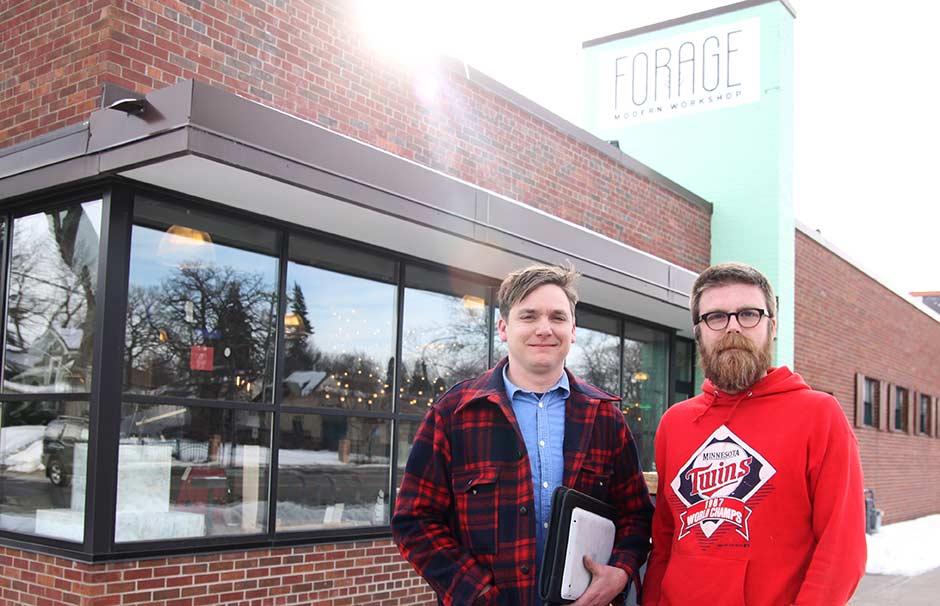 James and Mike at Forage on East Lake Street.

Quick, what do Forage Modern Workshop, Parka, and Blue Door Longfellow have in common? Mike Smith and James Brown. They’re the owners of local design-build company Brownsmith Restoration. Mike and James own Forage Modern Workshop, designed Parka and Blue Door Longfellow; and lease building space to those two restaurants. With Mike and James, one project leads to another bigger project. One idea sparks another idea. And crazy, way-out-there goals become reality.

It was a house in Red Wing that first pulled James and Mike into remodeling. They bought the house, fixed it up, and hoped to earn a profit on the sale. They didn’t. But, they didn’t give up. They found another house to restore, and this time their work earned them an award from the Historical Preservation Society of Red Wing. They had found their calling, and it was full steam ahead.

As they began to get work in the Twin Cities, they needed a space that would put them close to their project sites and would give them room to create their custom cabinets and woodwork. They found an old building near Sanford Middle School. “It was cheap, and we could afford it,” said Mike. The first iteration of Forage Modern Workshop opened its doors.

It wasn’t until the Blue Door Longfellow wanted to lease the building, that they were able to buy another commercial property. This time on East Lake Street. The new location changed Forage into what it is today. “We shut down our cabinet shop and decided to focus more on the retail aspect and support other people that are designing and manufacturing furniture,” said Mike. It also gave them the opportunity to lease space to another commercial tenant, this time Parka. 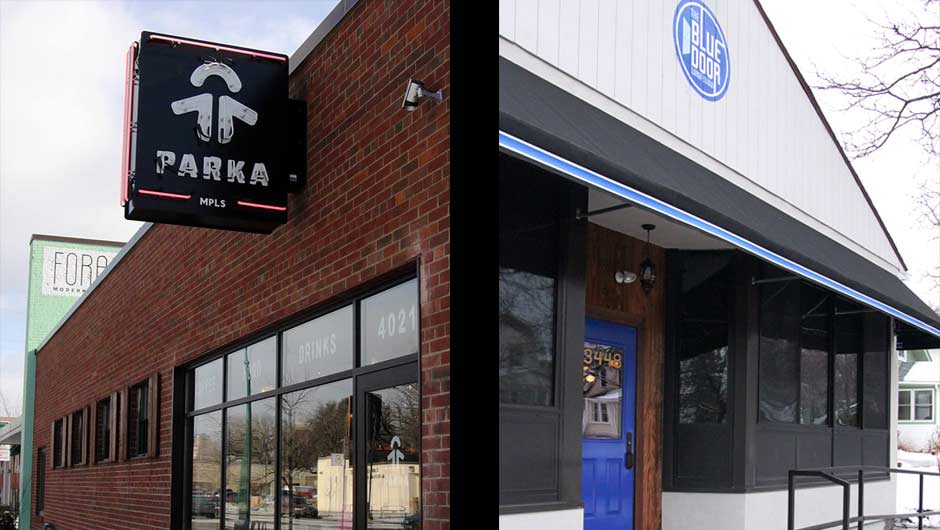 For Mike and James, East Lake Street has a lot of potential. James said, “We were more and more convinced that East Lake is totally this opportunity for us. [We said] ‘let’s try to buy a building on East Lake. We could do something really incredible on East Lake.’”

Mike added, “And we had seen demographic surveys of the neighborhood, and it’s our people. It’s educated people that have loyalty to local companies and are participants in their direct neighborhood communities…. It was a neighborhood we thought would embrace what we wanted to do, and there wasn’t anyone doing it here yet.”

There are a significant number of open properties on East Lake Street that Mike and James attribute to checked-out owners. James said, “You have to have a participating owner, which is what we came to realize was the reason why East Lake was so depressed. It had everything to do with the building owners themselves. They are the reason why this area is not thriving. Because they aren’t participating. They don’t care….Very few of these building owners live in the neighborhood. The only ones that do actually have things in them that are good. Like Hymie’s. John lives in the neighborhood and…”

“and his building is usually full of people,” finished Mike.

With the number of projects they have going on, it’s really an excitement for the work that keeps them energized. “I get to get out of bed every morning and go do whatever I want all day long,” said Mike. “What I want to do is build this company and put creative ideas and energy into new things, and it’s amazing that that’s my job.”

James added, “I love my job. It’s the most inspired and meaningful job I could have at this point. Plus, part of it is it gives me the latitude to think about what I could do…. We have these outrageous ideas of things we want to do…. Even this [waves hand around Forage] that we’ve been able to pull off, was outrageous…. We didn’t even have a company when we started. It was me and Mike, and I had this Dodge cargo van driving to Red Wing. We did all of the work, we did everything – all the framing, trim, hanging sheetrock, it took forever to do a project…and we made no money. It’s incredibly rewarding for me to try to put this insane goal out there and then actually do it.”

Prepared to Get Lucky

It’s just been a few years, and they’ve already achieved some of their ‘insane’ goals – opening Forage Modern Workshop, landing restaurant design jobs, and now the Birchwood Cafe remodel. James commented, “We heard that she [Tracy Singleton] was going to remodel three years ago, and we [said] ‘if we could ever do the Birchwood Cafe it would be the most amazing thing ever.’”

It wasn’t just luck. “Last year we really made an effort to be the guys that do small restaurants and commercial places,” said Mike. They hired David Lassman, a project manager with a background in commercial property and restaurant design to help them pursue commercial development. James said, “We hired Dave pretty much with the intent that we want to do these great restaurants. We thought there was going to be a big rash of restaurants to build…. There’s only a few other companies that are geared up to do a restaurant…, so we spent a long time learning about all of that stuff – all the licensing is just crazy.”

The work paid off. Brownsmith Restoration has received contracts with the French Meadow on Grand Avenue and the new French Meadow Wine Bar on Lyndale, as well as a few other restaurant jobs that are in the beginning stages.

Mike and James are always busy dreaming up new plans, including possibilities for growth on East Lake Street. “There’s a couple other businesses that we’re wanting to start in the future,” said Mike. “There’s always different ideas… Forage was one of those ideas, and it made sense to move forward on it. There’s another building that I want to buy, and I have a mixed-use development plan that I’m working on…and that is just another step towards another even greater bigger plan that seems unattainable at the moment.”

“Everything we do is a contribution whether it is negative or positive to…our whole society,” said James. “As entrepreneurs we get to be contributors, not just consumers. I get to contribute to my culture, which to me is really valuable…. I don’t want to be romantic…but I do think that it’s significant, it’s worth putting time into. I get to be a part of determining what things exist in our culture, which is really meaningful to me, because I think I can bring positive things.”