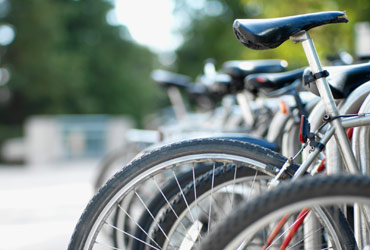 In the United States, you are three to fives times more likely to die in a bicycling crash than in European countries that have gotten serious about the safety of nonmotorized travelers.

Even in Minnesota, considered a national model for healthy, economical and earth-friendly biking and walking, 11 percent of traffic fatalities last year were suffered by folks not in a motor vehicle. But little or no state money addresses this problem. That’s been left to local governments and national programs, which are under fierce attack from autocentric conservatives over their 1.5 percent of federal transportation spending devoted to biking and pedestrian safety.

Fortunately, the Twin Cities landed $25 million from Washington several years ago to make getting around on two wheels or two feet less dangerous and more attractive. The positive results are visible as more and more people take to bikes and shoe leather around here. Bicycling is an economic boon, too, generating $315 million a year in manufacturing, distribution, retail and service in Minnesota, according to Minnesota Business magazine.

The next few weeks will be particularly rich in ribbon-cuttings of bike lanes, a University of Minnesota bicycle service center and even the state’s first bicycle stop light. Meanwhile, a free online bicycle routing site, sort of a Google Maps for two-wheelers, offers detailed trip guidance about hills, pavement quality, traffic conflicts and many other features throughout the 7-county metro.

So there’s never been a better time in Minnesota to start pedaling. Here are the latest improvements on the way for bicyclists:

At the same time, St. Paul is ramping up development of its Citywide Bicycle Plan with public open houses Thursday, Sept. 22, at the West Minnehaha Recreation Center and Monday, Sept. 26, at the Phalen Recreation Center. Both events will run from 4 to 7 p.m.

Minnesotans are voting with their feet in response to these welcome infrastructure upgrades that recognize the value of all transportation modes, not just motor vehicles. Four percent of Minneapolis commuters are on bicycles. And Nice Ride Minnesota, the bike-sharing program in Minneapolis and St. Paul, reports 215,000 paying riders in less than 12 months of warm-weather operation since June 2010.

Hats off to Nice Ride, federal grantee Bike Walk Twin Cities, the U of M and all the other advocates and activists who have made foot-powered travel a vibrant, growing part of Minnesota’s economy and culture.