Oh, I know what you’re thinking.

“Gosh, Bill,” you mutter to yourself as you read this post on your iPhone while stuck in traffic at the 494/Highway 100 interchange. “That whole ‘two birds, one stone’ metaphor is a bit gruesome.”

It is. But picture if those birds were chickens, and served up in a tasty food truck called Stone-Ground Fried Chicken. Now it doesn’t seem so bad, does it?

Food Trucks are the Opposite of Skyways, and Always Will Be

By now everyone knows that food trucks are trendy and popular. The way that you can tell is that giant corporations have gotten on the chuckwagon. There’s a Minnesota Twins food truck, fast food chain food trucks, and a corporate General Mills food truck. (Look for an ADM food truck featuring all-you-can-drink corn syrup for $1 sometime next year.) The whole thing might be threatening to get diluted if not for the seemingly infinite demand for food truck food, which (given that its just food, served out of a truck) might seem hard to fathom to a reductive logician. 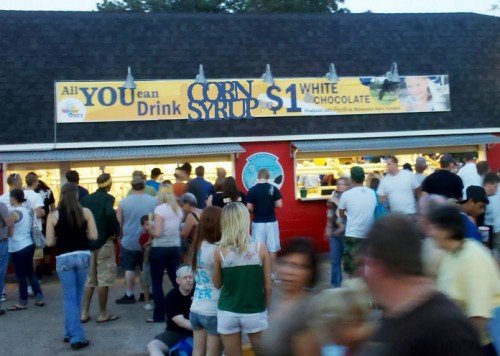 Right: The latest food truck craze, brought to you by Cargill.

Why do vast crowds of people streaming from their cubicles to pay $9 for a sandwich served next to a diesel tailpipe? Why do people wait in line for half an hour just for the pleasure of eating out of a small paper basket with sauce leaking out onto their khakis while standing cramped amidst un-fenestrated modernism?

Well, I wrote about this last year. There are a few simple reasons. Food trucks reflect a long and proud tradition of urban street vending that appeals to to our hunting DNA. Food trucks offer a desperately needed excuse to go outside for a change. Food trucks concentrate the great variety of Twin Cities’ small businesses in a place that sorely lacks them. And outside of a fancy sit down joint, food truck food is just plain better than most other choices.

So far, it’s working. The inevitable food truck backlash is as underwhelming as a Lake Superior tide. Sure, there’s some kvetching by the owners of skyway restaurants, who look at a food truck the way a Nova Scotia fisherman looks at a harp seal. (If only they could club baby food trucks…) And I might be sympathetic to their plight, if not for the fact that the skyways themselves didn’t represent a far worse distortion of the downtown urban pedestrian market. Every time someone leaves the skyway to patronize a food truck, somewhere in the world a speeding SUV swerves to avoid killing a kitten. 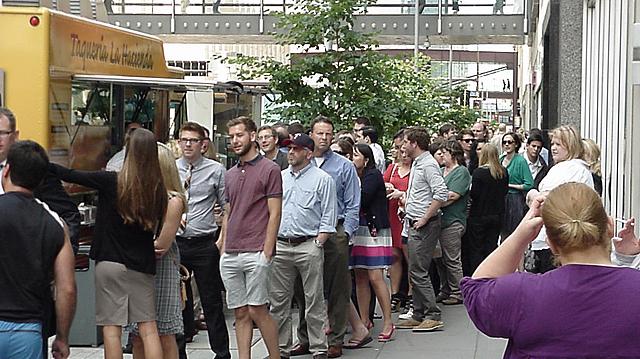 No, the main problem with the food truck craze is that the current sidewalk conditions along Marquette Avenue are borderline inhumane. Outside a few precious places, there are no parks, benches, tables, or shade anywhere in downtown Minneapolis. Just as people should never eat at their desks in a decent society, nobody should have to use a fork standing up.

But what can be done? 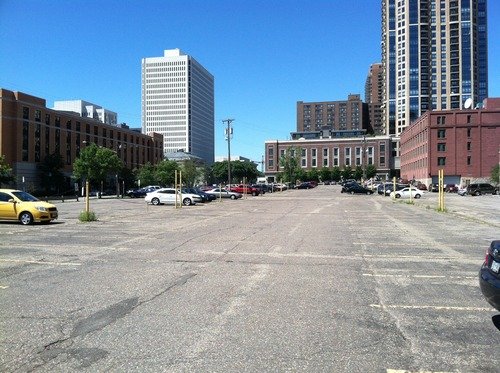 So close your eyes and picture a world where half of the surface parking lots in downtown Minneapolis was transformed into food truck parks. In San Francisco and Portland, I have personally seen surface parking lots that have become food truck oases, little semi-landscaped clusters of food truckery surrounding tables or napkins where people can sit and wipe their chins like normal dignified people.

There could be a whole range of these kinds of food truck parks, scattered in spots around the great parking periphery of downtown Minneapolis. These food truck parks could be varied, sitting somewhere on a spectrum from temporary-to-permanent. They could have different characters and designs. Some could disappear in the winter, some could stick around like hungry robins. 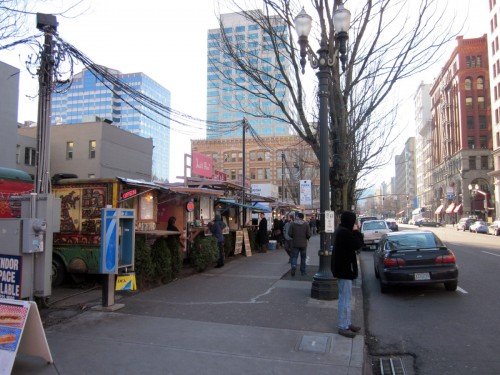 You could even provide an electricity and/or water hookup at these places, so that food trucks wouldn’t have to use their loud and smelly generators all the time. You could have solar panels: green food trucks. You could hire Max Musicant to provide entertainment and social activity, cultivating street musicians like they sometimes do in New York. You would singlehandedly transform the current food truck fiasco into something resembling how decent human beings behave — you know, with tables — while simultaneously encouraging walking, and beginning to transform downtown’s vast surface parking lot blight into places that transcend car storage.

All you can eat. 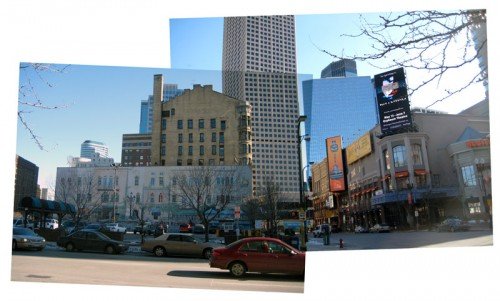 The surface parking lot at Block D: a perfect spot for a food truck plaza.