A new peer-reviewed study published today in Environmental Health Perspectives has found evidence suggesting that food packaging is a major source of exposure to Bisphenol A (BPA).

The study, conducted by the Breast Cancer Fund and the Silent Spring Institute, recruited five families (each with two parents and two children, for a total of 20 people) and tested them for levels of BPA and certain phthalates in their urine while feeding them a diet of freshly prepared foods.

BPA is a known endocrine-disrupting chemical and has been linked to numerous health effects, including behavioral changes, early-onset puberty, reproductive harm, diabetes and even cancer. Due to its dubious reputation, it was also recently named on the Minnesota Priority Chemicals list, which includes toxins that are harmful to children and are present in products kids are exposed to. Phthalates are no treat either, having been linked to poor sperm quality, obesity and cancer.

What did the study do?

On the first two days of the study, participants ate as they normally do. On the following three days they were provided with freshly prepared organic meals-no canned food, and no plastic storage containers. After that they went back to their normal diets.

The levels of BPA and a particular phthalate called DEHP (used in food packaging) dropped substantially (an average of 60 percent for the BPA, and 50 percent for DEHP) during the three days when participants were only eating the freshly prepared foods.

These findings suggest that food packaging (e.g., canned food, grease-resistant wrappers and polycarbonate bottles) is a major exposure route for BPA, and that removing it from food packaging would lead to an immediate and significant drop in BPA levels in the general population. 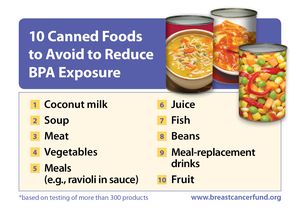 One recommendation from the authors is to cut out consumption of prepackaged foods and to cook from fresh as much as possible. They’ve even created this handy chart (right) which shows the top ten canned foods known to leach the most BPA, so start by avoiding those if you can.

BPA and phthalates have both been linked to certain types of cancer. You can act now by asking President Obama to take a strong stand on getting these cancer-causing chemicals out of our products.