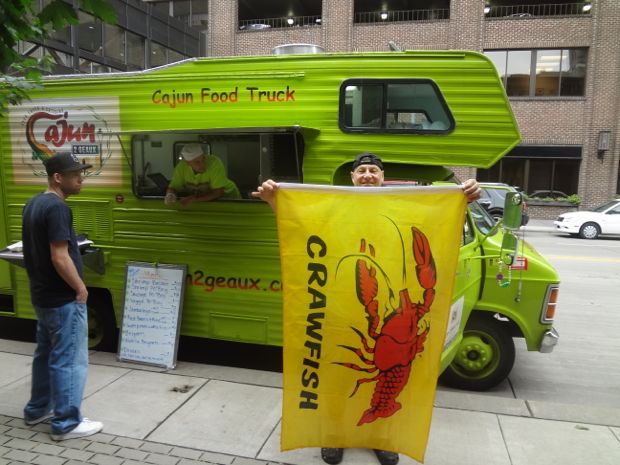 My latest food finds include a Cajun food truck in downtown Minneapolis, Dongpo pork on University Ave., and mock pork in a basement locale in Eat Street.

“Look for the crawfish flag,” Tim Glover told me. He doesn’t serve crawfish etoufee every day, but when he has it on the menu at his Cajun2Geaux food truck, you can spot the big crawfish flag flying from the radio antenna.

But finding the truck is the first challenge – he isn’t in downtown Minneapolis every day, and he doesn’t have a fixed location – so you have to check the Cajun2Geaux.com website or his Twitter feed, @Cajun2GeauxTim. The menu changes from day to day, but he always has shrimp po boys ($10) and jambalaya ($4/$8), and he usually has red beans and rice, and sometimes chicken and sausage gumbo. I caught up with him recently in front of St. Olaf Catholic Church on 2nd Ave. between 8th and 9th Streets. Not a great location, Glover acknowledged, but the city has asked the food trucks to spread out a bit, and he was trying to oblige.

I tried the shrimp po boy and a small side of jambalaya, and enjoyed them both – the sandwich was stuffed full of lightly breaded deep-fried shrimp, topped with lettuce and tomato and just enough hot sauce to get your attention. Glover also offered me a beignet, fried to order and served piping hot, dusted with lots of powdered sugar. Not quite as light and puffy as at the Cafe du Monde, but still quite tasty.

You can check upcoming locations on the Cajun2Geaux calendar – Wednesday evening he’ll be at Harriet Brewing (Lake St. & Minnehaha), Thursday at the 612 Brew in northeast Minneapolis, and on Friday, somewhere in downtown Minneapolis for lunch.

I went out to dinner the other night at the Tea House, 2425 University Ave., Minneapolis, where I noticed that there were a number of dishes on the illustrated menu that I had never seen before  – a Dongpo pork hock bathed in an oily red pepper sauce; a platter of steamed sliced pork belly with preserved vegetable Meizhu Dongpo style, sliced beef and beef tripe in spicy sauce, Meizhou fried rice ($10) and an appetizer of sliced pork belly with fresh garlic ($9). For that matter, I had never heard of Dongpo or Meizhou.

When I inquired, I learned that earlier this year, the Tea House had partnered with a Chinese restaurant company, the Meizhou Dongpo Group, which is about to open its first US restaurant in southern California. In preparation, the company brought a couple of its chefs to work in the Tea House kitchen, and back in February, they sponsored a Dongpo Cuisine Week – which I missed completely.

Meizhou, it turns out, is the former name of the city of Meishan in Sichuan, and happens to be the home town of Dongpo Su, an 11th Century poet, and also Wang Geng, chairman of the Meizhou Dongpo Group. A famous Sichuan dish, Dongpo pork, is named after the poet. It’s made from pork belly which is simmered, braised, sauteed and steamed, and flavored with soy sauce, ginger, onions, wine and sugar.

I also stopped by for lunch on Monday on Eat Street at the Evergreen Restaurant, 2424 Nicollet Ave. I have a hard time getting Carol to accompany me on my visits to this little underground gem, and I have to admit, I can understand her point of view. The Evergreen has no windows, no ambiance and no wine and beer. Which may be why the place is never very busy, and you can usually find the owner sitting behind the counter reading a Chinese newspaper But the Evergreen does offer a number of food items that you can’t find anywhere else – including an assortment of small cold appetizer plates, some Taiwanese specialties, and a big variety of vegetarian dishes prepared with artfully created mock meats – including beef, pork, shrimp, scallops and shrimp.

The cold appetizer plates are in a cooler in the back of the dining room – where you can just serve yourself – prices range from $1.75-$4.95. I haven’t tried the stewed pig’s ear, but I have enjoyed several of the vegetarian plates, including most recently the garlic-ginger seaweed knots and the tofu skin salad.

The Taiwanese specialties include stir-fried noodles (rice or wheat) with pork and vegetables; Taiwanese style noodles with meat sauce, and sea bass with crispy soybean topping, as well as several soups. I was in the mood  for something light, so I opted for the Taiwan-style fried noodles with pork and vegetables (bean sprouts and slivers of carrot and green onion, $6.45) – but I asked for mock pork instead of real meat, and the owner was happy to oblige. The result was light and tasty, and if the slivers of mock pork (I’m guessing it was made from marinated textured gluten) didn’t taste exactly like meat, it was still pretty close.