For most Twin Cities residents it’s easy to overlook the close ties between the University of Minnesota and the state’s small towns. If you take a second to think about it though, the connection is clear. As a land grant university, they’re closely related through agricultural research, football, and a number of other fields of study.

“Farmers in the Midwest are big fans of Big Ten football and Minnesota farmers and small town people are the Minnesota Gophers’ most loyal fans,” insisted Don Loeslie, a Warren, Minn., farmer and former leader of wheat growers’ associations.

That’s why he and others in Marshall County have scheduled a “Jerrysota Day” celebration for Monday, June 23 in Argyle. The beans and brats gathering is a salute to Jerry Kill, coach of the University of Minnesota Golden Gophers football team, and a fundraiser for Epilepsy Foundation of Minnesota and the American Cancer Society – Relay for Life.

Kill is a cancer survivor and his struggles with epilepsy have made medical and sports news in recent years. Those would be reasons enough for Marshall County residents to celebrate the football coach, but the long-standing ties between country folk and university personnel run much deeper.

Argyle is 330 miles northwest of the University of Minnesota Twin Cities campuses, or a five-and-a-quarter hour drive with good weather and roads. For comparison, it is 130 miles, or a two hour, 15 minute drive from Winnipeg if you get a quick trip through the border crossing.

Citizens in the Stephen-Argyle school district like football. Three school officials are on the planning committee including Hall of Fame high school football coach Mark Kroulik who retired in 2009 with a 168-12 coaching record, was an assistant coach on three state championship nine-man football teams and led the Stephen-Argyle Storm to six state championships as head coach.

Also on the committee is Staci Winge, a financial associate for Thrivent Financial. She enjoys football but especially appreciates how Coach Kill brings broader public attention and University of Minnesota research to epilepsy.

“My eight-year-old (son Nick) has a different type of epilepsy. Doctors think he will outgrow it,” Winge said. “We are so thankful for Coach Kill and the university. We want to know everything that anyone is finding out about this disease.”

Kill and his wife Rebecca have donated $100,000 and started a Chasing Dreams fund through the Epilepsy Foundation of Minnesota that, among other goals, will start “seizure smart” training programs to help school personnel handle seizures in classrooms and on school property.

Other members of the Argyle event committee have science and economic links to the University. Two are farmers, and Glenn Rivard, of Rivard’s Quality Seeds at Argyle, sells hard red spring wheat and soybean seeds that were bred for the Upper Midwest region.

Spring wheat has different starch and protein properties than other classes of wheat grown in the U.S., such as hard red winter wheat grown in Kill’s native Kansas. The spring class of wheat is grown by farmers in Minnesota, North Dakota and Montana and in neighboring areas of Canada.

“There isn’t a soybean up here that hasn’t been touched, or helped in some way, by Minnesota scientists,” he said.

This brings home the importance of land grant universities, their state research university, and the entire Big Ten athletic conference to the 9,499 people in Marshall County.

This is why Marshall County’s economy hums along or chokes with the health of the U.S. and Minnesota farm economy. Much of the health of that local economy is tied to education and land grant university research encouraging efficiency and productivity gains while protecting the national food supply.

“Farmers are the only business people who buy everything at retail, sell everything at wholesale, and pay the freight both ways,” Kennedy said. 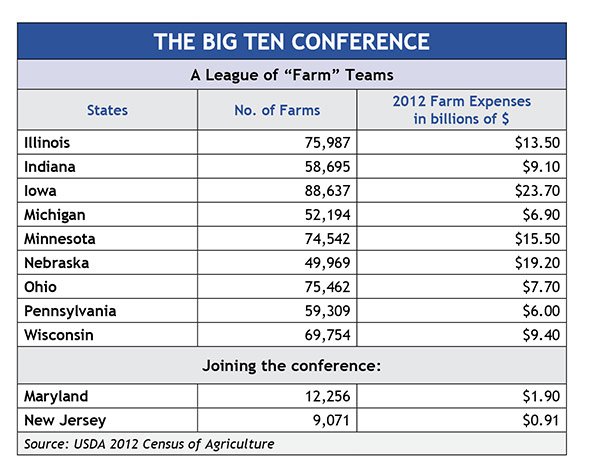 That also explains why agribusiness, financial firms, farmer-owned co-ops and other food and related firms are huge sponsors and advertisers on the Big Ten Network and commercial networks that broadcast major college football and basketball games.

“Farmers are already planning ahead to next year during the football season,” said Loeslie. “The basketball season is when they make purchasing decisions.”