At two in the morning, the Minnesota House finally took up the bill to allow home-based childcare providers and personal care attendants to organize and vote on union representation. 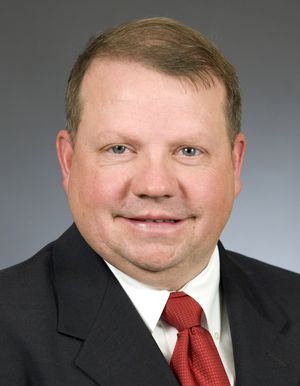 House Media services has posted the video archives of the session. At 8:15:20 in the House video, Representative Kresha (R-Little Falls) introduced the S0778A39 amendment. At 8:16:50, he begins:

Thank you Mr. Speaker and Members. What I’d like to do with this amendment is to require all signatures for the [union] solicitation materials to be printed in at least 14 point font. I’d like to avoid fine print. Smaller type can be hard on the eyes and even cause headaches according to the National Institute on Aging.

We do have an example of this in statute with park closings . . .”using the closure statements the following language must include in a font no smaller than 14 points.” So I would just like to include that for the first part here on the childcare signatures.

It’s a good amendment and I would urge your support on this one.

Here’s what the National Institute for Aging actually says about font size in Making Your Printed Health Materials Senior Friendly:

Make type size at least 12 point, 13 point, or 14 point. Type that is too small can be hard on the eyes and can even cause a headache. When selecting a type size, keep in mind that some fonts are naturally bigger than others. For example, look at Georgia vs. Times New Roman. Both of these fonts are in 13 point type size and yet Georgia is bigger. Use 14 point type size when working with smaller fonts, like Times New Roman. Headings should be even larger so they will stand out. If your audience has low vision, consider using larger fonts, like 16 point or 18 point. However, for older readers who do not have low vision problems, font sizes that are too large (greater than 14 point) may be difficult to read. [emphasis added]

Throughout the debate, Republicans stood up against fine print on union materials. Former English teacher Sondra Erickson discussed her bonafides as a graphic designer, for example.

Bluestem applauds the offensive on fine print and looks forward to Ron Kresha, Mary Franson, graphic designer Sondra Erickson, Joyce Peppin and other members of the Republican House Caucus standing up for readability in all documents that Minnesotans may have occasion to read in the course of business.

Let us suggest that not only union organizing documents, but all terms and conditions, contracts and other documents distributed by banks, consumer credit companies, mortgaged lenders, payday lenders and pawnbrokers be printed in 14 pt type.

Indeed, given the urgency of this issue, first pressed by Republicans at 2:00 a.m. this morning, we’re shocked that they haven’t proposed this before. (The amendment was withdrawn after much discussion).

Unless the early morning fantods over fonts was simply time-wasting concern trolling, the Republican House caucus should have golden opportunity today to demonstrate their commitment to Reader Rights and Liberty.

SF1276, a bill to modify mortgage foreclosures provisions and require lenders and servicers loss mitigation, which passed on a 61-1 vote in the upper chamber on May 16, has been substituted for the House version of the bill and, under House rule 1.21, placed on Calendar for the Day Sunday, May 19, 2013.

Will the House Republican Caucus be bold, bold we say, and ask that the House rules on amendments be suspended, and ask their colleagues from across the aisle to require banks and mortgage lenders to produce all home loans, mortgages, and documents related to foreclosures, loan modifications, and evictions in at least 14 point size type, regardless of the font?

Surely, if Kresha’s crusade is worthing of imposing on organized labor, banks and other lenders deserve big honking print as well.

At Bluestem’s request, our friends at The Uptake are pulling the video of this morning’s Fontgate debate. We’ll post it here when it is available.

In the meantime, enjoy the #Fontgate twitter discussion from the wee hours.