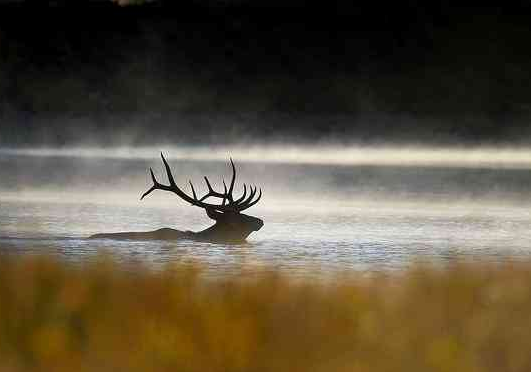 DULUTH — The Fond du Lac Band of Lake Superior Chippewa wants to bring wild elk back to northeastern Minnesota, but the plan could face some rough patches. Elk tend to get into trouble with their human neighbors.

The big browsers once roamed not only Minnesota but most of the continental United States. Testament to their presence in the state comes in geographic names: The state sports one Elk River, several Elk Lakes, and at least one White Elk Lake. They were killed off by white settlers, retreating to strongholds in the Rocky Mountains by the late 1800s.

Advocates say bringing the native animals back will increase diversity, encourage wildlife tourism, provide hunting opportunities, and restore the ecosystem more closely to what it was before the massive disruptions of white settlement. But elk will face some challenges fitting into Minnesota’s modern landscape.

Courtesy of Fond du Lac Band of Lake Superior Chippewa
Elk once roamed not only Minnesota but most of the continental United States.

Berg served for years in northwestern Minnesota, so he’s dealt with elk-human conflicts.  State wildlife officials brought elk from Wyoming to Itasca State Park in Minnesota in 1914 and 1915.  Twenty-five members of this herd were brought to the Red Lake Game Preserve in northwestern Beltrami County in 1935, and a few were kept at Itasca for display. The western herd quickly grew to 100 animals. They had room to roam because President Franklin Roosevelt’s Resettlement Administration was buying out marginal farms and letting them return to wilderness.

“The elk did well when those huge old farms grew back up into wild pasture and forest,” Berg said.  “But once the forest took over, the elk simply shopped around for a new home.”

They found still-active farms around nearby small towns with the ungainly names of Gatzke and Grygla, and they’ve been causing problems there ever since. The small elk herd, now down to about 30 animals, frequently ravages crops in the fields, destroys hay supplies, crashes through fences, and generally makes farmers’ lives miserable.

Meanwhile, a larger herd in Kittson and Roseau Counties migrates back and forth across the border into Manitoba, but doesn’t cause as much trouble as the Grygla herd.

Berg said most farmers are satisfied when they’re given a special permit to shoot a few elk, or when a hunting season reduces the population. But he said he would understand if the DNR wanted to take a pass on another potential elk headache.

So far the DNR is noncommittal.

“We’re interested in the idea,” said Steve Merchant, the DNR’s wildlife population and regulation manager. He said the agency will take a close look at the results of studies proposed by the Fond du Lac Band and the University of Minnesota. The studies will examine biological aspects of possible re-introduction, as well as public acceptance of the idea.

“Wherever you let them go, they are certainly capable of moving great distances, and it’s naive to think they’d never get into crops,” Merchant said.

Elk are one of just two animals for which the state pays landowners for damage, the other being wolves. Merchant said the fund is perennially scraped dry.

The man promoting the idea of elk reintroduction is Mike Schrage, a wildlife biologist with the Fond du Lac Band in Carlton County, south of Duluth. Tall and sandy-haired, with the slow, deliberate manner of a scientist, Schrage explained that elk are “generalists,” meaning they’ll eat just about anything; they’re equally comfortable on the prairie and in the woods. They wouldn’t compete with deer, he said, as they seem to eat enough different things.

Courtesy of Fond du Lac Band of Lake Superior Chippewa
This map highlights areas where elk could potentially be reintroduced.

Topping Schrage’s list of prospective home sites are three state forests that sit in ceded territory – parts of Minnesota that tribes turned over to the federal government in 19th-century treaties. The Nemadji, Fond du Lac, and Cloquet Valley State Forests arc around Duluth and are full of the young aspen and brush that elk love. Schrage said any place with lots of public land and few farms would be a good home for elk.

Omashkoozoog (“prairie moose”) have long been an integral part of the Ojibwe cycle of life. Hunters harvested the animals for meat; skins were used to make clothing, shelters and drums; the spectacular spreading antlers were used for tools and decorations. The Fond du Lac tribal government is backing Schrage’s quest, and he said tribal members look forward to hunting the animals again someday. Schrage tells them not to get too excited: “You and I will probably never hunt them,” he says, “but hopefully our children and grandchildren will be able to.”

It will be a 10-year, $1 million-plus project, according to Schrage – and that’s if everything goes well.  He is asking for state money from the lottery to research the idea.

If the plan succeeds, Minnesota will be following examples set by Wisconsin and Michigan. In all three states, early settlers wiped out native elk herds by the late 1800s. Michigan reintroduced elk in 1918; currently the population is about 670. Michigan’s goal is to maintain the herd at 500-900 animals, and since 1984 the state has conducted elk hunts to keep the population in check.

Wisconsin brought 25 animals from Michigan to the Chequamegon-Nicolet National Forest near Clam Lake in 1995. That herd is now about 160 animals; this winter Wisconsin is bringing more elk in from Kentucky to boost numbers and improve genetic diversity.

Kentucky could also be a source of elk for Minnesota. Herds there thrive on grassland that now covers mountains flattened by coal mining, surrounded by the remaining forested mountains. Other states that have returned elk to parts of their once far-flung native range include Virginia, North Carolina, Tennessee, Missouri and Arkansas.

Schrage said before any elk are brought to Minnesota, they would be isolated for a time and tested for chronic wasting disease, parasites and other problems.

Michigan and Wisconsin promote the wildlife-watching potential of their herds. Tourists are thrilled to catch a glimpse of the big browsers with the white rumps strolling through the woods, the cows tending their young in sociable groups called “gangs,” the bulls sporting enormous racks and trumpeting to assert dominance during the fall mating season.

But Mike Schrage said there are more important reasons to bring the elk back to Minnesota. They would add another animal to the landscape, and diversity is always a good thing. Climate change is bringing new diseases and parasites that challenge native animals, and elk may do better than deer in some areas, he said. Caribou will not be back in the foreseeable future, since they eat the lichens that grow on old trees. Moose face a huge challenge from the warming climate. And Schrage said there’s a moral obligation to bring elk back:

“Had we not shot them out of the state, they’d still be here,” he said. “We altered their habitat, but elk are adaptable enough to live anywhere in the state, as long as people put up with them.”