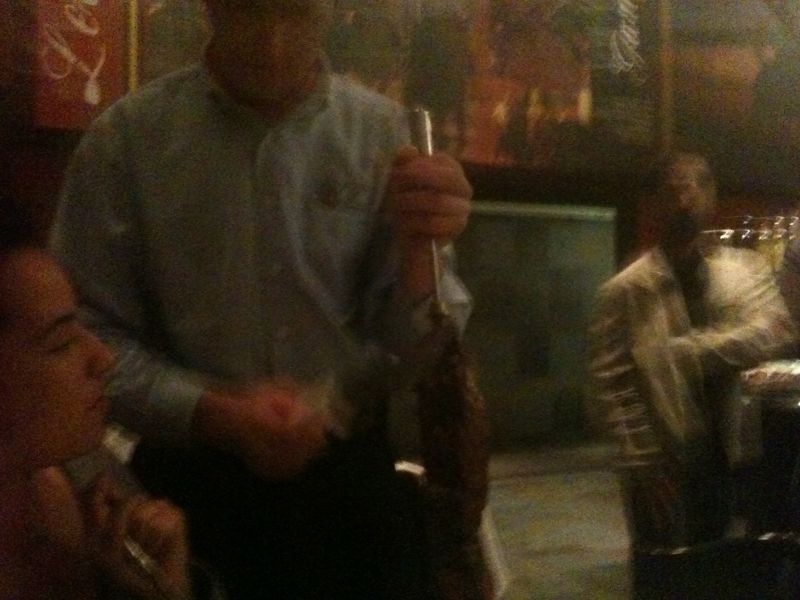 I have cut back dramatically on meat consumption over the last few months, but last week was my niece Tess’s last week in town, so we decided to go on a meat binge together. Tess had been curious about Fogo de Chao, the local outpost of a Brazilian chain of grilled meat restaurants, and I remembered it from a previous visit, soon after it opened, as offering a stylish but relaxed dining experience, and delicious grilled meats. Last week was also Restaurant Week, which meant that the fixed price dinner, regularly $46.50 for salad bar and all the meat you can eat, was reduced to $30, including dessert.

This time around, the meat was as good as ever, but the dining experience left a lot to be desired.

The basic idea is brilliant – actually a smart improvement on the wasteful American steakhouse model. Instead of serving up 16 ounce slabs of meat, which quickly cool on the plate, the servers at Fogo de Chao come around with spears of meat prepared about 15 different ways – sirloin, tenderloin, ribeye lamb chops and leg of lamb, pork loin, pork sausages, chicken legs and more, hot from the grill, and carve off a slice or two at a time. When you want the meats to stop coming, you turn over a little table card – green on one side, red on the other. Every bite is hot and juicy, and there is far less waste than at the high-end steakhouses. (An awful lot of prime sirloin winds up either in the dumpster, or as very expensive doggy bag leftovers.)

The salad bar is also first rate – a big selection of prepared salads, marinated vegetables, as well as quality cheeses, smoked salmon and prosciutto. As soon as you are seated, a basket of irresistible pao de queijo – cheesy turnovers is delivered – another smart way of getting you to fill up on less expensive fare before the meat starts arriving.

The problem at Fogo de Chao, no doubt exacerbated by the Restaurant Week promotion and the fact that the Twins were playing a few blocks away, (and the Vikings, too, I’m told) was the rest of the dining experience. Tables were crammed into the dining room about as close together as possible, the decibel level was high, and the servers were rushing around at such a tempo that they constantly seemed to be in danger of running into each other. We happened to be seated very close to the salad bar, which increased the chaos level.

At one point, in his hurry, our waiter, carrying a full try of dishes over his head, spilled water on my head, for which he apologized profusely and repeatedly. The overall experience, which reminded me a bit of being seated too close to the buffet at a Chinese restaurant, wasn’t exactly conducive to leisurely dining – we were in and out of the restaurant in little more than an hour.