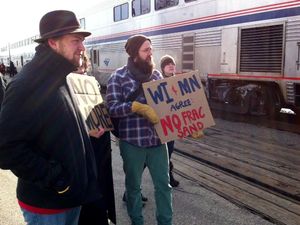 An “Earth Train” carrying 70 Minnesotans heading to Washington to ask President Obama and his administration to lead a clean energy transformation made an impromptu stop in Winona to meet local activists–and pick up another passenger.

Given the area’s role in the ongoing grassroots fight about industrial scale sand mining, this development isn’t a surprise.

The City of Winona and Winona County have been one of the flashpoints for grassroots citizen activism against unbridled industrial scale sand mining. Earlier this month, dozens gathered in 10 degree cold outside of City Hall for a candlelight vigil before the City Council met to consider ordinances developed during the city’s moratorium on frac sand.

The interim ordinance expires in March.

The county made headlines earlier this month; the Star Tribune’s Tony Kennedy reported in In a first, Minnesota asks Winona County to assess risks of frac sand:

In a critical test of Minnesota’s approach to frac sand mining, two state agencies have called on Winona County to order an in-depth study of environmental and health risks associated with a cluster of proposed mines and processing sites.

The commissioners of the Minnesota Pollution Control Agency (MPCA) and the Minnesota Department of Health each published formal comments this week strongly urging the county to require a full environmental impact statement before deciding whether to approve at least two silica sand mines proposed by Minnesota Sands LLC. The Winona County Board will have final say on the study.

It’s the first time either state agency has called for such an in-depth, precautionary study of frac sand operations, which have been booming in southeast Minnesota and western Wisconsin as firms demand the sand suitable for new drilling techniques that have revitalized the U.S. oil industry. The industry has created concerns as well as jobs, with two MPCA commissioners noting possible contamination of drinking water, lung disease and unsafe truck traffic.

Given the county’s record with the permitting, it’s no wonder citizens in Winona and Winona County are looking to the state legislature for relief.

Just down the road in Winona County, the Minnesota Proppant mine and processing complex has hit a wall of grassroots citizen resistance. As Bluestem noted in St. Charles Township and Red Wing City Council speaking truth to corporate frac sand power, over a 1000 people have signed a petition against the project–a lot of folks for a small town with a population of 3,735.

We looked at the way in which the projects are connected in Will Winona County frac sand mines EIS signal greater scrutiny of the Minnesota Proppant project? 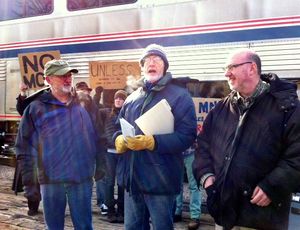 Will Representative Gene Pelowski (DFL-Winona) listen to the concerns of his constituents? Will Steve Drazkowski?

This weekend the Sierra Club, MN350 and allies are joining a delegation of more than 200 Minnesotans who are traveling to D.C. to ask President Obama and his administration to lead a clean energy revolution that will end our dependence on fossil fuels and their devastating impact on our air, water and lands. Communities in southern and southeastern Minnesota are experiencing this impact firsthand with industrial-scale frac sand mining and processing proposals that threaten public health, worker safety, and our natural resources. The Sierra Club North Star Chapter has joined organizations across the state in calling for a moratorium on new frac sand mine proposals until environmental concerns have been adequately evaluated and addressed.

Instead of deepening our commitment to fossil fuels that will worsen the climate crisis — and which often have greatest impact on rural and environmental justice communities — we must instead fight for a clean energy future that will create good, family supporting jobs, clean our air and water, and improve public health.

The frac sand activists are gaining the attention of state groups; will they get their local representatives’ attention?