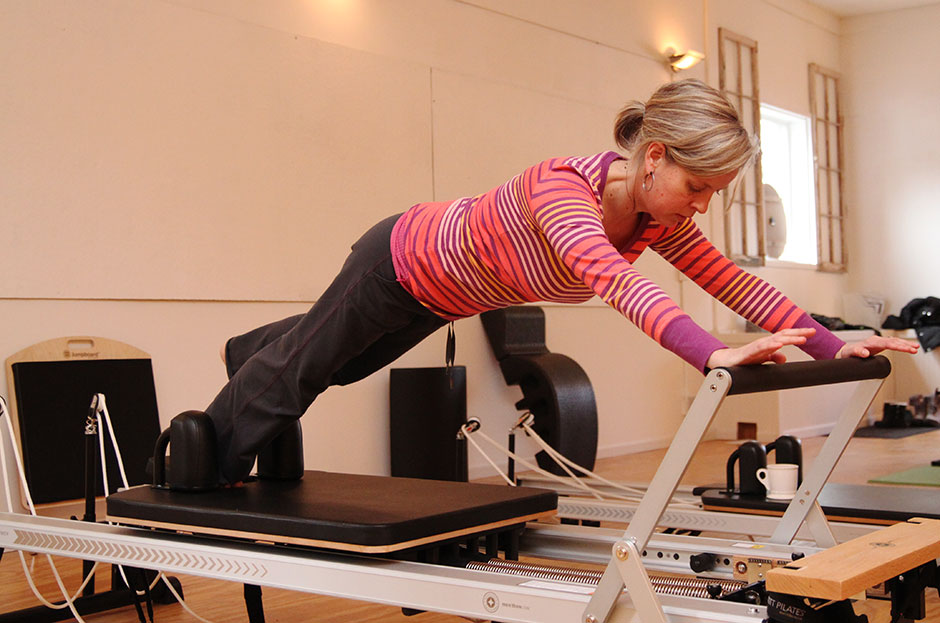 If you’ve been in a yoga class, you’ve probably done the plank. Here is a variation of plank on a Reformer machine. You’ll feel it…everywhere.

A dancer for many years and Pilates instructor for ten, Rachel Bouchard brings her love of movement and her love of people to Flourish, her new Pilates studio in Longfellow. These two elements are the foundation she is using to create a welcoming community for people interested in Pilates, yoga, and bodywork.

Driven to learn how to best help people with differing abilities and exercise needs, Bouchard has studied many methods of movement, exercise, and massage, including Stott Pilates – a method that is based in anatomy, physiology, and the biomechanics of movement. She has also studied myofascial release – a massage method used to release tightness in the connective tissue that surrounds muscles. “One of the things about movement and biomechanics of movement is that if you want [your body] to function correctly and if you’ve got any tightness or congestion, you’ve got to get that released first,” said Bouchard. “If you do that hands-on muscle work first it gives the body more range to work properly.” 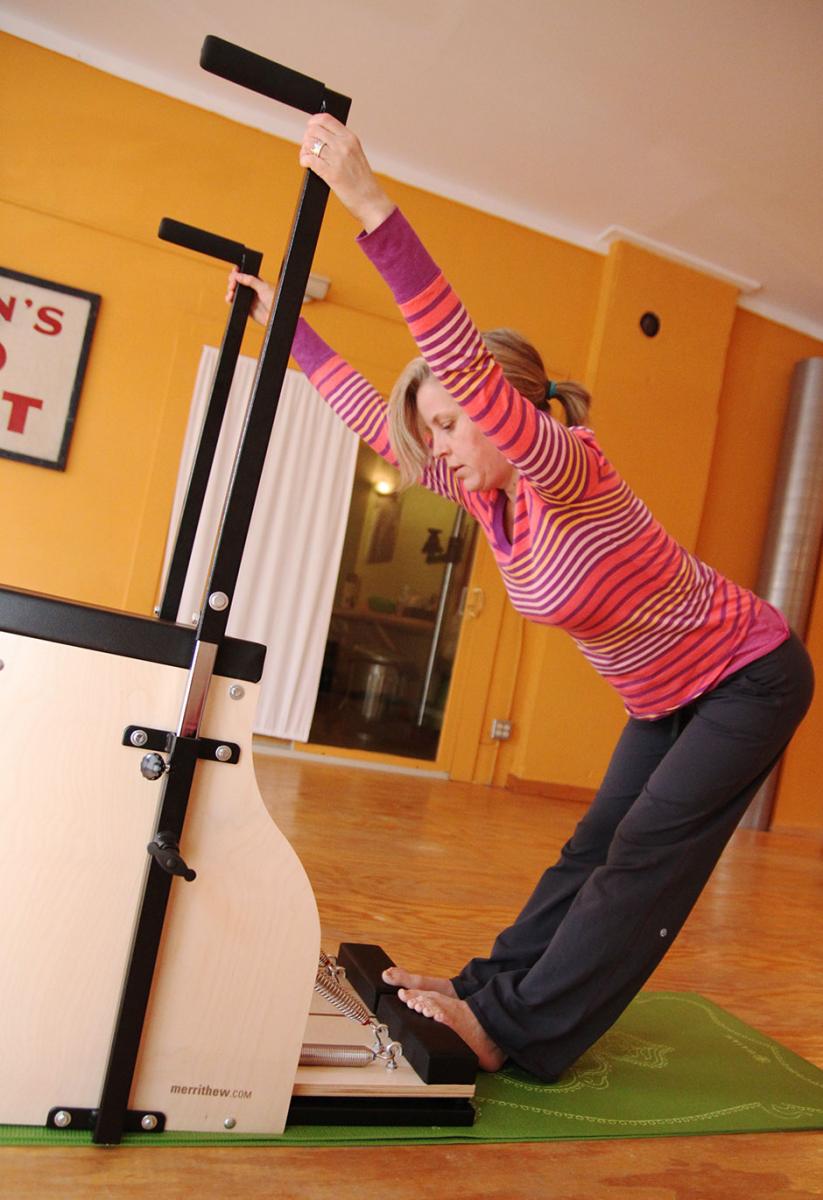 In one flowing movement, Bouchard goes from this starting position to a mid-air push up, lifted mostly by her arms and partly by the pads she is standing on. What’s feeling the burn? Arms and stabilizing muscles.

Bouchard pulls from various movement methodologies to design unique classes for her students. “In my teaching, I try to really grab from as many modalities as possible because I think people learn better that way…and nobody moves the same way,” commented Bouchard. She added, “There aren’t any other instructors in town that teach the way that I do…who blend so many modalities, and there are very few instructors who can also do body work.”

Bouchard teaches students with a variety of backgrounds and skill levels – people who have never stepped into a Pilates studio, advanced students, injured athletes, and people who have movement difficulties, such as spine and back problems. She noted, “I’ve done a lot of work with degenerative disc disease and helping clients maintain so they don’t need surgery.” 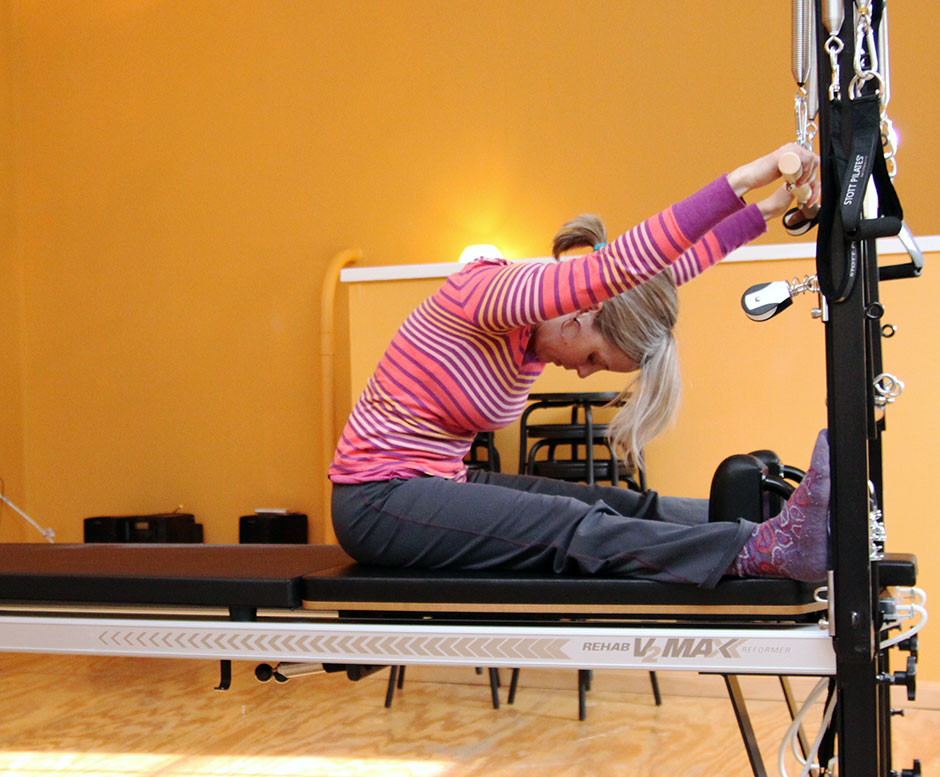 Flourish has two Rehab Reformer machines, which are used primarily for physical therapy work. Bouchard demonstrates the Rolldown, an exercise that helps lengthen and strengthen the spine. The goal? Getting the spine to curl vertebrae by vertebrae. Easier said than done.

If it’s your first time taking a class, Bouchard warns that you’ll probably leave a little overwhelmed with all of the information, but you’ll be feeling good. “You’ll learn to move your body and use a different muscle set and you’ll learn a different mindset because you do have to be engaged while you are doing Pilates…which is a nice thing too because there is this meditative quality to it,” commented Bouchard. She added, “Very few people I know can actually be thinking about what they are supposed to be doing in an hour and do Pilates.”

When talking with Bouchard, one word that continually came up in the conversation was community. She explained that she wants Flourish to be an inclusive gathering space, which is one of the reasons she chose a Longfellow location. “There’s a strong community base here, and its seems like people are really friendly and outgoing, and it seems like there is a big athletic component,” she said. For Bouchard, a strong community is one of the benefits to practicing Pilates. “It’s a really nice thing to be at work and have different classes coming in and people knowing each other and talking to each other,” she explained.

Flourish is near Longfellow Park at 33rd Street and 36th Avenue. This spring it will be moving into building across from Turtle Bread, which is currently occupied by Riverstone Salon.