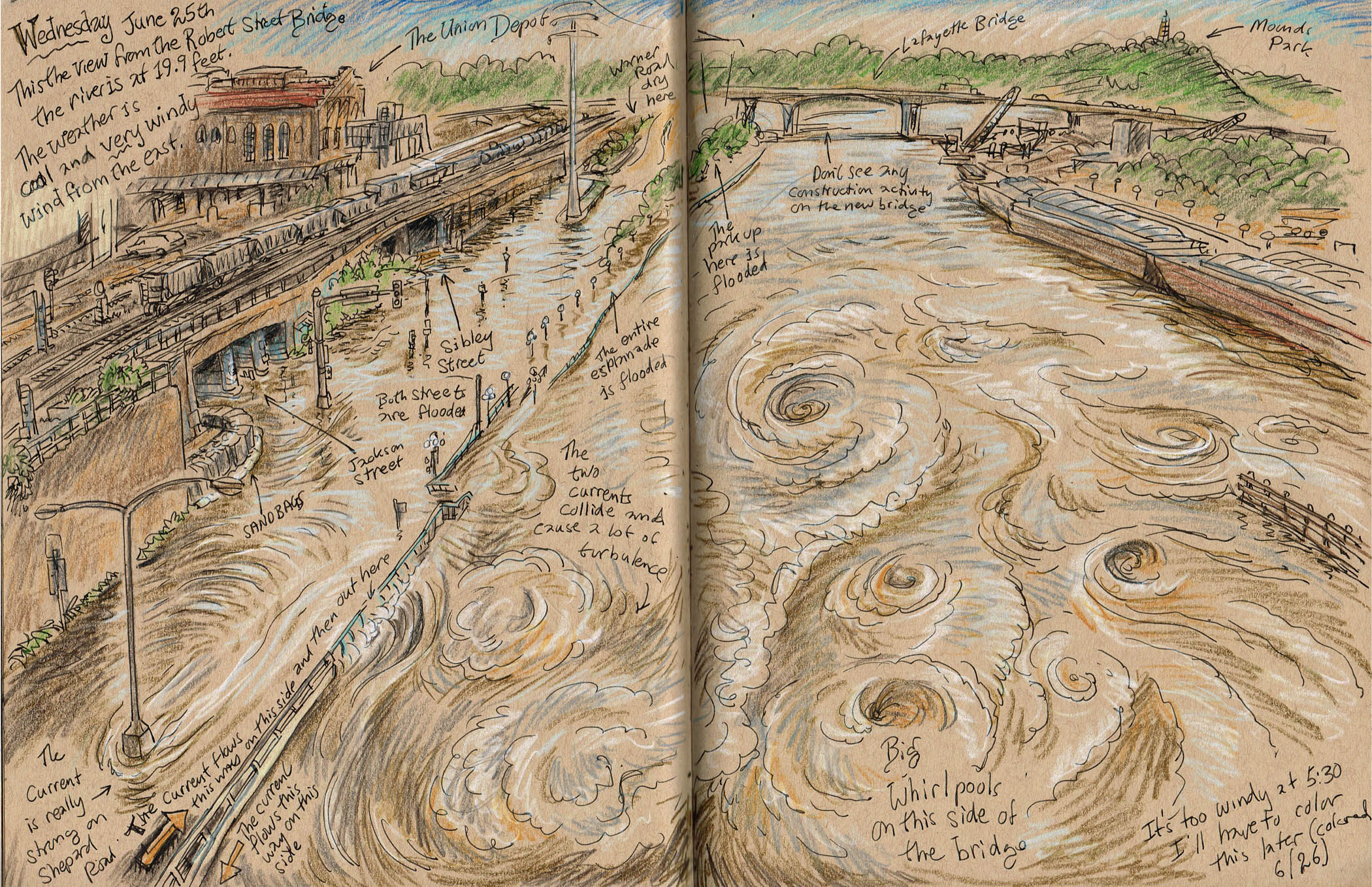 Roberta and I did a lot of sketching of the flooding in Downtown Saint Paul. We wanted to document the changing landscape as water gradually replaced land. There’s a slideshow of our flood sketches at the PiPress. Here’s one of the sketches I did from the Robert Street Bridge of the Port of Saint Paul’s Lowertown Landing submerged beneath the roiling Mississippi River [above].

The first thing I’d do is get rid of Warner/Shepard Road between the Upper Landing at Chestnut Street all the way down to the Lafayette Bridge. The “Law of Disappearing Traffic” will take care of what little car traffic there is. The next thing I’d do is wall up the underpasses at Sibley and Jackson so floodwaters cannot again threaten Lowertown like this: 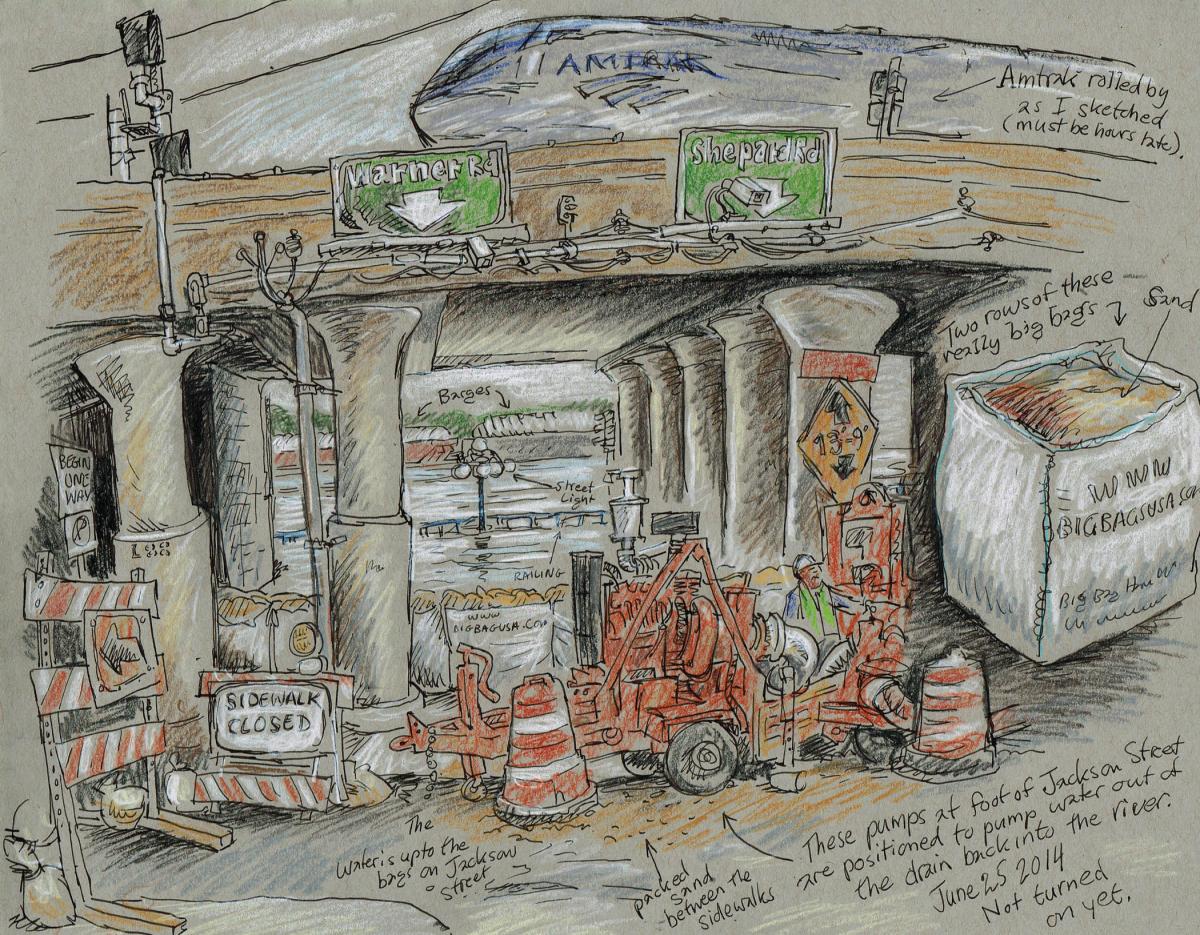 The next thing I’d do is divide the Mississippi riverfront into 3 sections and do the following:

From the District Energy power station to the Wabasha Bridge, I’d demolish the old West Publishing buildings and the old Ramsey County Jail with explosives (that’ll get a bunch of spectators) and replace them with an awesome amusement park: 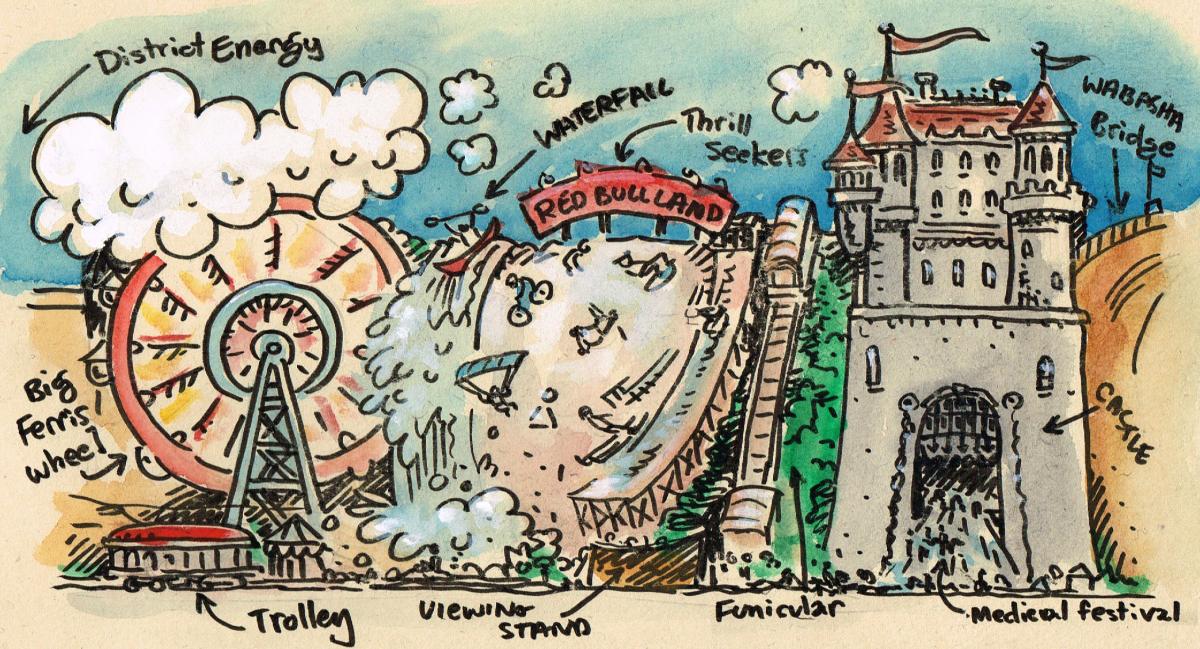 Every waterfront amusement area has to have a Ferris wheel. Our Ferris wheel would give thrill seekers the experience of being enveloped in a cloud of steam coming from District Energy. In case the steam is too hot, there will be an artificial waterfall on the other side to cool off any scalded passengers. More awesome fun can be had by kayaking or watching other people kayaking down the falls. Next to the falls would be a sheer cliff that would be the tabla rasa upon which the awesome Red Bull folks would concoct awesome death-defying, thrill-seeking activities like the awesome Crashed Ice or the awesome Flutag. Throw in a ski/snowboard jump, a trolley and a funicular. For more awesomeness, build a castle into the bluff with a drawbridge and a moat etc. In the summer the summer, there could be medieval festivals and in the winter, the Winter Carnival Royalty can hold court – awesome! And weddings. There can never be enough venues in Saint Paul for people to get hitched in.

From the Wabasha Bridge to the Robert Street Bridge , I’d demolish the boring park on the bluff and the dumb road and the ugly parking lot that hardly anyone uses and restore the bluffs and create a nature preserve like the Bruce Vento Nature Sanctuary except with terraced steps for easy animal viewing and food trucks (not visible in this sketch because they’re behind the trees, trust me there will be food trucks): 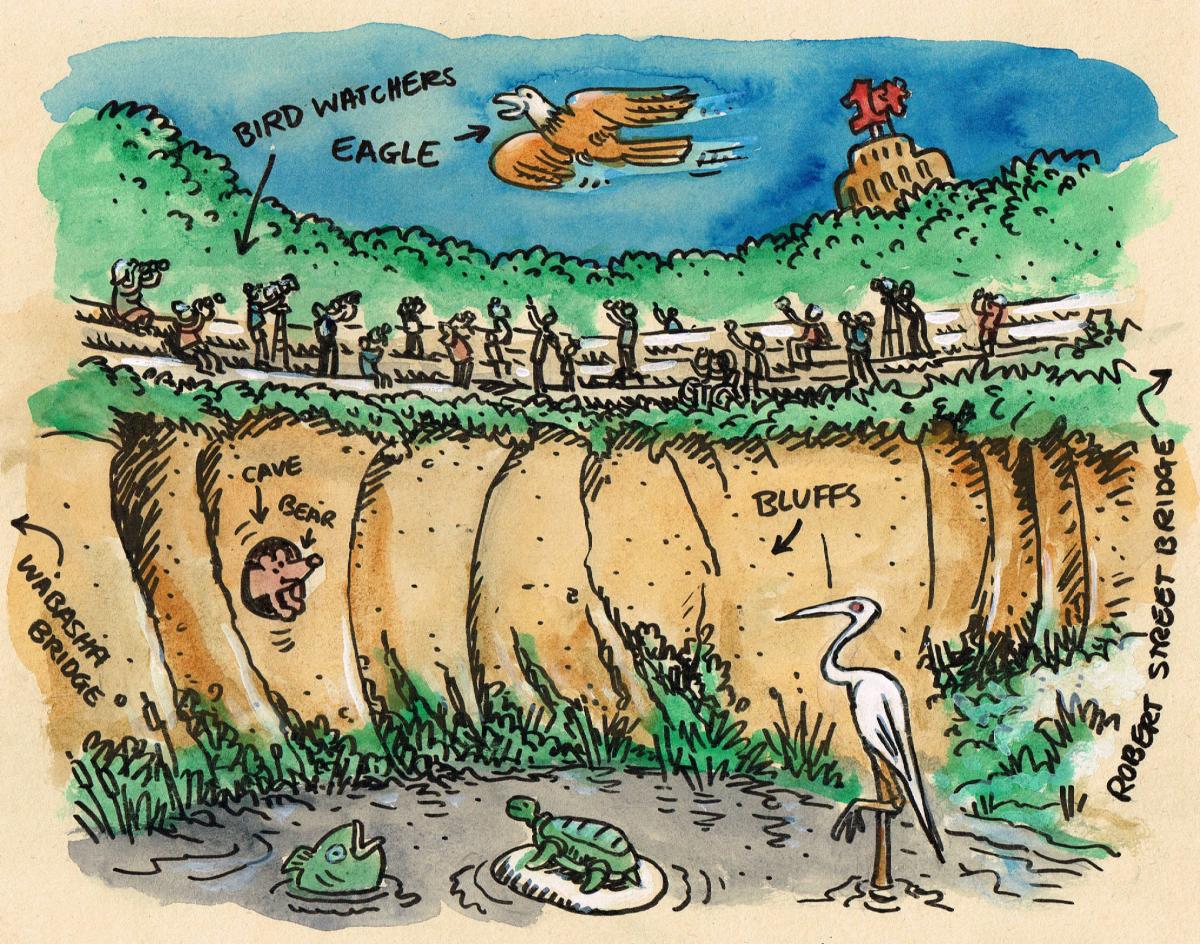 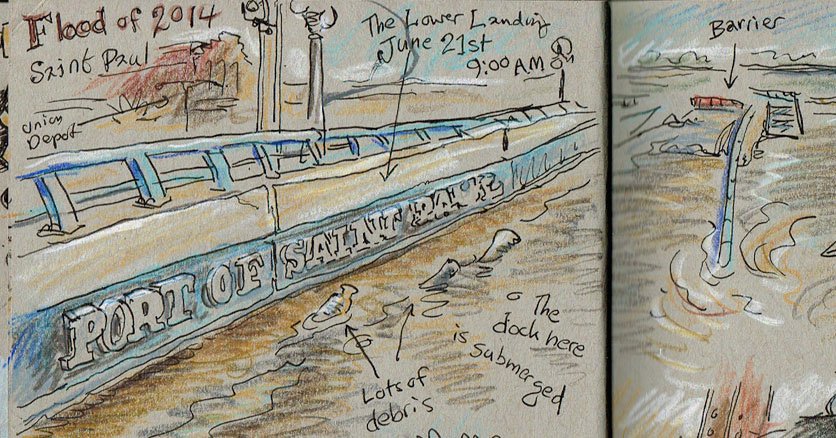 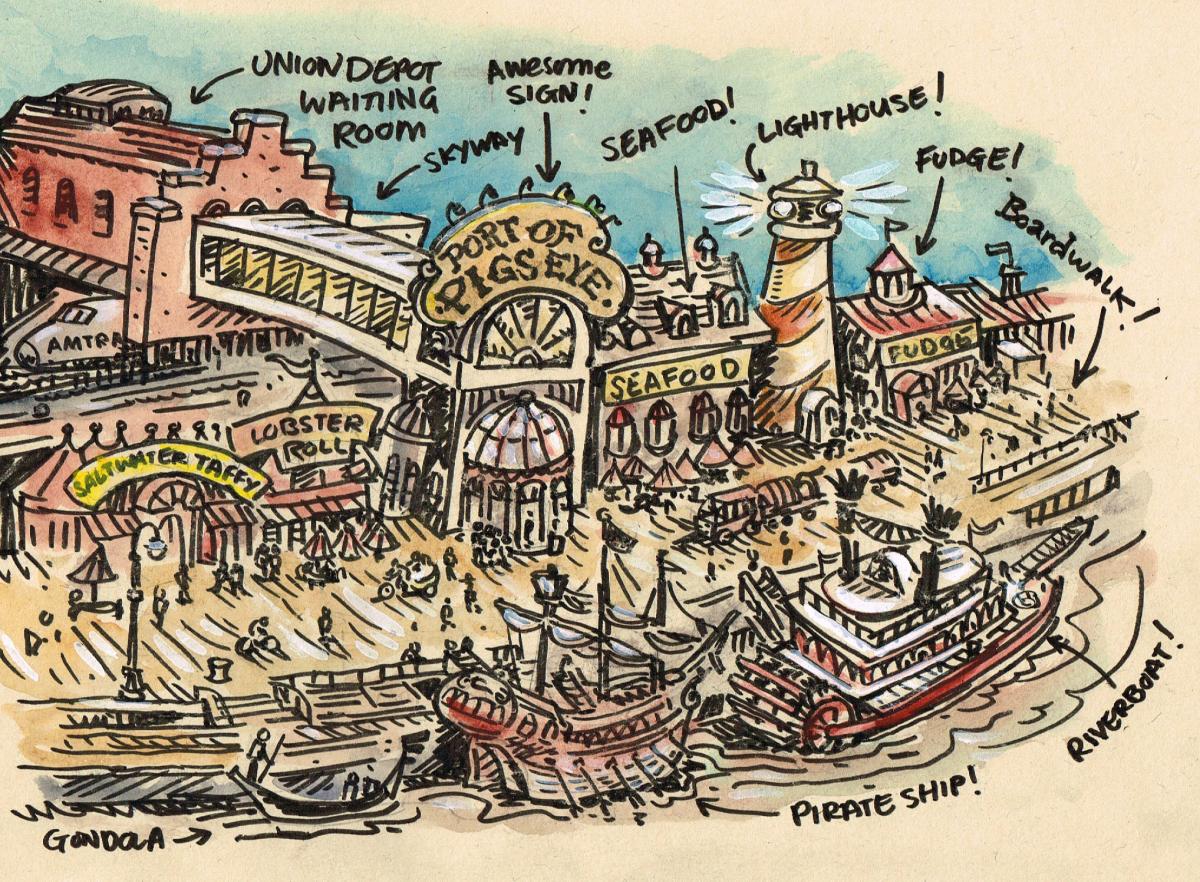 Ports have lighthouses and seafood restaurants and and fudge. And all of this awesome stuff would be built on a boardwalk way above flood level so the next time the river floods, people can flock down to the Pig’s Eye Port boardwalk and drink beer, listen to live music and eat saltwater taffy and watch trees float downriver – awesome!

So, c’mon Saint Paul, let’s use some of that FEMA disaster aid money to build an awesome riverfront!