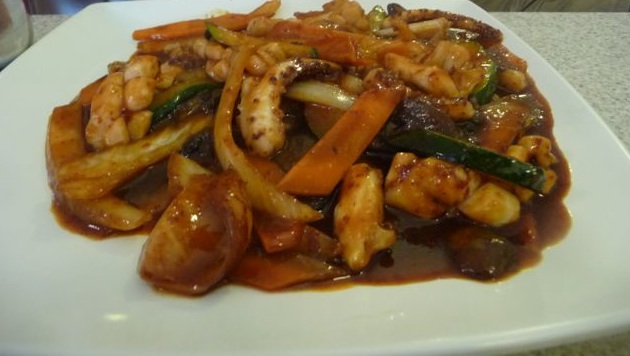 I have been on a bit of a Korean eating binge lately. When Carol goes out of town, as she did recently, I tend to head for the cuisines that I like and she doesn’t – and Korean definitely falls into that category. So my first stop was at the Korea Cafe, 211 Oak St., Minneapolis, a little no-frills storefront in Stadium Village with a big selection of traditional Korean fare. I often order beef here – either bulgogi (marinated thinly sliced barbecued beef) or kalbi (grilled beef short ribs), but this time I opted for the spicy pork bulgogi, suffused with the signature flavors of Korean cuisine: garlic, sesame seeds, green onions, red pepper paste and soy. 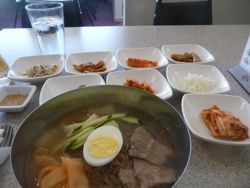 Then when the dog days hit last week, with the heat index reaching 112, I decided that I had to have my favorite hot weather dish, naeng myun, a cold soup made with chewy buckwheat noodles in a mildly sour and spicy broth. I found a delicious version at Mirror of Korea. 761 Snelling Ave. N., Minneapolis. Actually, they have several different versions, including one made with red pepper paste, and another made with raw fish, but I opted for the mul naeng myun, ($10.95), a made with slices of beef brisket, cucumber, and radish, in a soup broth flavored with vinegar and Korean mustard, and chilled with ice cubes. Very refreshing.

Monday night, Carol graciously actually agreed to come along on a return visit to Mirror of Korea. I sort of hoped that this time would be the charm, and that Carol would finally be won over to Korean cuisine. I steered her towards the o jing uh bok uhm, stir-fried calamari, zucchini, mushrooms and carrots in a spicy, mildly sweet red pepper sauce (shown above, $12.50), while I ordered the hae mul pa jeon, an eggy  pancake made with green onions and seafood (mostly octopus, or so it seemed, $12.95), served with a sesame and soy dipping sauce. I enjoyed both dishes, though I have had better seafood pancakes elsewhere (the Korea Cafe and King’s in Fridley come to mind), but Carol was not won over.﻿

I especially liked the panchan, the little mostly vegetarian side dishes that are a traditional part of every Korean meal. Typically, restaurants will serve four or five panchan to accompany the main course, but our dinner at Mirror of Korea included eight different dishes – from marinated bean sprouts and cabbage kimchi to stewed potatoes in a sweet and savory sauce. 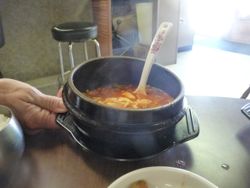 Last stop – the Sole Cafe, across the street and down the block from the Mirror of Korea at 684 Snelling Ave. N. Sole used to be more of a late-night karaoke bar than a restaurant, but the owner got tired of the late hours, so now it operates as more of a traditional Korean restaurant. My companions and I ordered from the more limited $8 lunch menu, but still found plenty to choose from – a seafood stew with soft tofu in a rich red pepper broth; broiled bulgogi, served over cellophane noodles in a ceramic pot, and a platter of calamari stir-fried with vegetables over steamed rice.