There’s no doubt that income inequality is finally getting the attention it deserves. President Barack Obama assailed it in his second inaugural address saying we can’t succeed “When a shrinking few do very well and a growing many barely make it.” Ben Bernanke decried inequality for “creating two societies.” Pope Francis famously tweeted his opinion. Even Goldman Sachs CEO Lloyd Blankfein called for “some redistribution” to create a stable and just society. But for all the talk, not much is happening. Why is that?

It turns out that the solutions to income inequality are difficult and rather long-term. There are also signs that the population really doesn’t care yet, meaning there is no pressure on our leadership. But there are a few things that we can do to start improving income distribution and create genuine opportunity today.

It’s a Barataria tradition to not complain without offering solutions. Don’t like these? Please suggest your own!

Proposed solutions to income inequality typically look at improved development in the working population and thus more equality. A greater emphasis on education is credited with Brazil’s improvements, for example, as well as how we lifted ourselves out of the worst deprivation of the late 19th century. The long slide since 1968 is taken as a sign we haven’t been investing enough in education. This is very much the most popularly suggested solution for fighting income equality around the world, especially in developing nations where this is obviously a problem. Calls for more and continuous education are common here in the US for the same reason.

But this is probably not the problem we have. 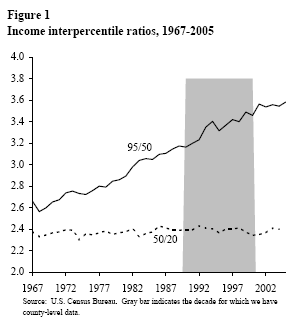 The Federal Reserve of San Francisco published a detailed study in 2007 that included some interesting findings. In particular, they included this interesting chart that shows the ratio of share of income brought home by the 50th percentile (those in the very middle) divided by the share by those right at 20% (the edge of poverty). That didn’t change over time. But the ratio of income brought in by the 95th percentile divided by the median changed dramatically and consistently as long as there has been a problem.

This tells us that the issue is a concentration at the very top, not a growing disparity at all levels. It also shows how stable this trend has been for a very long time. Working class people have not been stealing relative shares from each other – the disparity comes from higher pay to executives and higher returns from investments over work.

So what should be done about it? These are my solutions based on this particular data:

Are these ideas going to improve things right away? They will all take time, especially the provisions that rely on tax policy. But that is the only tool our government has at its disposal to influence anything in the economy. Short of directly taking money for “transfer payments”, which is to say obvious socialism, it’s hard to imagine reducing this decades long trend quickly.

However, we can and should get started today. Reducing income inequality is very important and needs to be addressed. This is well understood by nearly everyone at this time. It’s a matter of doing something about it.

What are your ideas?