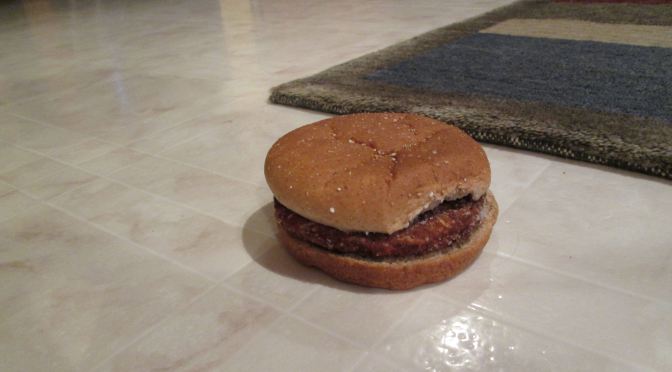 Students at Aston University in Birmingham, England have conducted an experiment and claim to posess data that lends credence to the famous 5-Second Rule for dropped food.

They fumbled toast, pasta, biscuits and sticky sweets, and then left the morsels on different types of flooring for up to 30 seconds.

These calculating slobs of science found that time is a significant factor in the transfer of bacteria from a floor surface to a munchie. Remarkably, the experiment found that food dropped on carpet picked up fewer contaminants than food dropped on flooring that is less plush.

Additional findings: that wet food drew more invisible unsavories than dry food, and women were more likely to pick up and eat dropped food than were men. That last one runs against the stereotype that women are less disgusting in every respect. I can only reconcile it by assuming that, rather than pick up dropped food, men are more likely to grind tidbits into the carpet with their feet before plunging their hands deeper into the chip bowl.

Although its findings are contradicted by study after study after study, this unpublished and non-peer reviewed research is good enough for me, because now I can begin to imagine living in a more forgiving world where mistakes can be undone with no penalty as long as you realize it right away.

I’m not saying I do a lot of dumb things, but most of the time while committing my major screw-up-of-the-day I pretty much know it immediately – often while in the act.

Although putting it that way might have been an error.

What if there was a Universal Five Second Rule (UFSR) that allowed you to instantly take back anything at all if it seemed wrong within five seconds of commission – a contract signature, an unkind word, an errant throw, a dropped match, a Facebook post or an e-mail?

The irreversibility of ill-considered choices is what makes it worthwhile to think before acting. In a world governed by the UFSR, some people would abandon discipline and take back virtually everything. And then there would be an expansionist lobby – if five seconds works, why can’t we make it fifty seconds? Or five minutes?

“A slippery slope,” as they say. Which, if you stepped onto one, is exactly the sort of thing you would want to revoke before the consequences hit.

What is the proper length for a grace period?