The Saint Paul streetcar plan came out a few weeks ago. The city is holding open houses on the streetcar proposal beginning this week. (Yesterday!) You can read all about streetcars here on the site…

Saint Paul has a strong tradition of being skeptical about trends, and the streetcar plan is no exception. For example, an East Side city council member came out against the proposal, yesterday a cranky Pioneer Press columnist used it to complain about taxes, and even the pro-transit planning commissioners seemed cautious. I’m proud to live in a city that is careful with its investments, and thinks for itself.

That said, I think that streetcars are a good idea, not just in general, but for Saint Paul in particular. St Paul is a unique place, but it isn’t quite perfect yet. Here are five long-standing problems to which a streetcar might just be the solution. 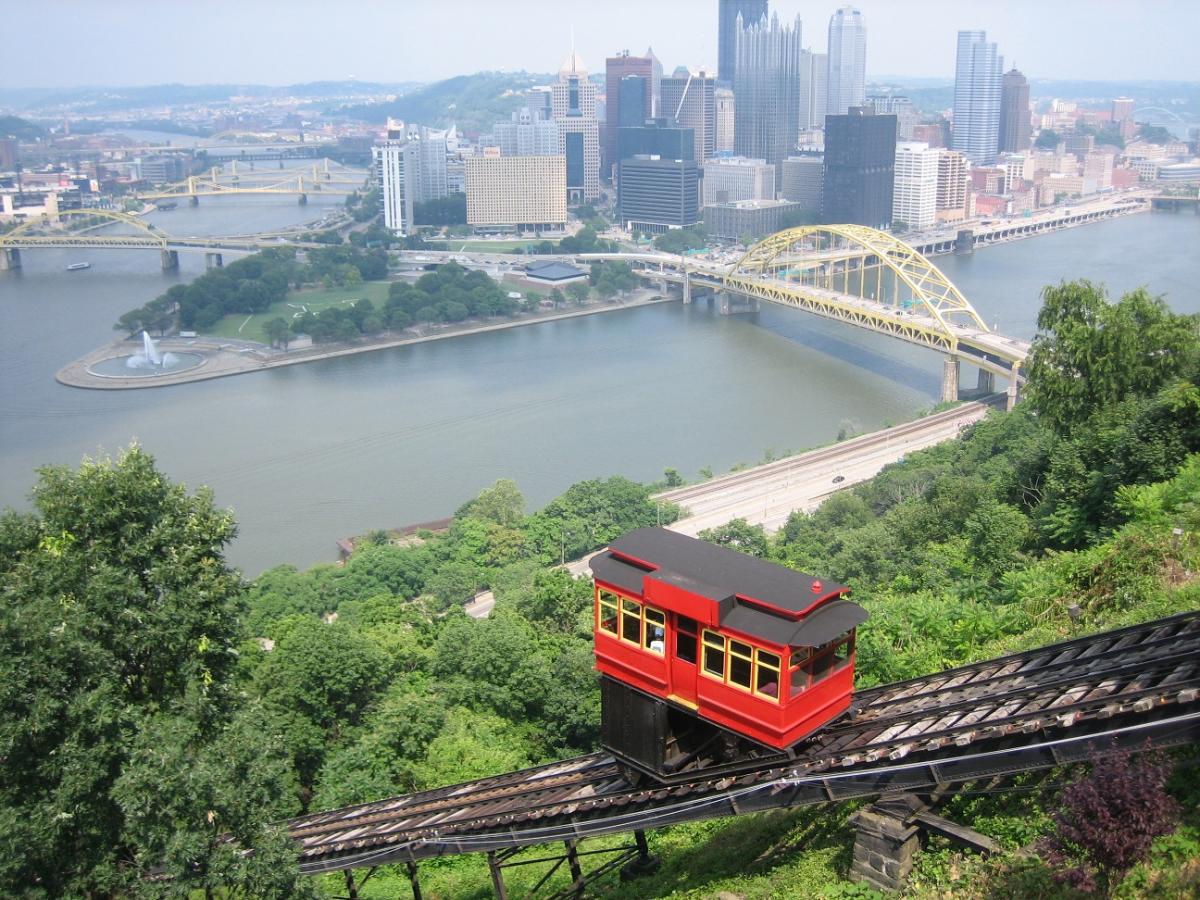 Right: An “incline” in Pittsburgh.

I interviewed the mayor recently for this site, and when I asked him about why Saint Paul doesn’t have as much bicycling as its Western neighbor, he referenced the geography. Yes, Saint Paul is full of hills. Each time I walk from the West Side, I’m struck again by the beauty here. Saint Paul offers subtle topographic visions from the bluffs down to the river valley, views that are constantly shifting, and leave you a bit breathless.

On the other hand, many people don’t like walking up the hills surrounding downtown. Streetcars can solve that, kind of like the funicular railroads that surround Pittsburgh. Imagine taking the streetcar up Cathedral Hill on a nice summer’s day, and walking back downtown after lunch. Imagine putting your bike or stroller on the streetcar and riding up to the East Side. Hills are a lot more fun coming down. It’s gravity!

For years now, the East Metro local growth coalition (i.e. civic leaders and business types) has complained that the West metro is getting the lion’s share of Twin Cities’ transit investments. In some ways, the imbalance seems inevitable, as population and employment centers have been shifting Westward for well over a century. But at the same time, the East Metro has a lot of potential for transit-oriented density, particularly in the Saint Paul core. If we have to wait until the CTIB gets around to making transit investments here, we’ll be waiting a long time…

The streetcar plan offers a way to speed up the virtuous cycle of transit investments and walkable urbanism on this side of the Mississippi. If we use streetcars to double our rate of population growth along key corridors, other regional investments will look a lot more promising.

Whoever designed the streets (in St. Paul) must have been drunk. I think it was those Irish guys, you know what they like to do. 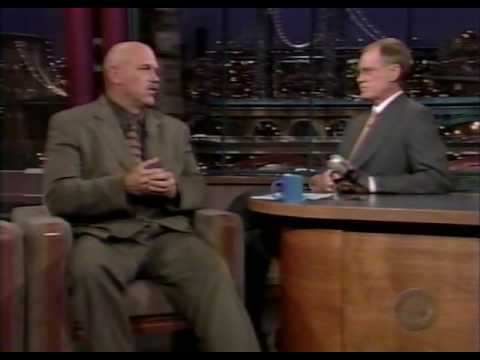 It’s kind of funny, kind of horrible, and a classic Jesse moment. But at the same time, it points to a problem that many people from Minneapolis (and other Saint Paul suburbs) have when they come over here. Apparently because we didn’t name and number all our streets according to some bizarre OCD logic, nobody can find their way around.

In a small way, a streetcar network could help demystify Saint Paul. Streetcar lines offer clear linear routes through the city, psychological security not offered by a bus. Having an East-West spine running along 7th Street will give any mystified Minneapolites an easy way to figure out how lost they are.

Right: Former Governor putting his foot in his mouth.

Many people seem cranky about Saint Paul traffic, even though it’s not really that bad. (Most of the time, downtown streets are practically empty.) One of the big drivers of our traffic frustration are moments of gridlock during events, like at the Excel center or the Crashed Ice thingamabob.

Capacity is one huge advantage that streetcars have over buses. Done right, they can move a lot more people than a bus. And they take up a hell of a lot less space than an equivalent number of cars. If even a third of car drivers heading to an event take the streetcar, it would do wonders for peak congestion along 7th Street.

For me, the biggest problem facing Saint Paul is that our downtown isn’t connected to the neighborhoods around it. Downtown Saint Paul is beautiful, and offers a ton of potential to be an almost magical experience. Unlike some places, we didn’t tear down the best parts of our historic core. (Granted, we did tear down a lot…) It’s easy to squint your eyes and imagine a future where downtown Saint Paul is full of people, an environment both historic and modern, a true city in an almost European sense. 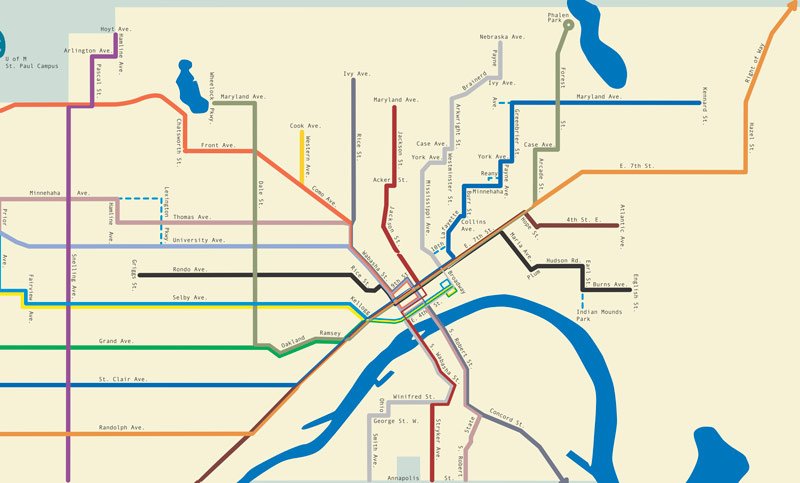 But our downtown is very isolated from its surrounding neighborhoods. Other than West 7th Street, you’ll find barriers limiting downtown’s walkable fabric in any direction: a river, a bluff, another bluff, a freeway, another freeway, yet another bluff, a city road that looks and feels just like a freeway… 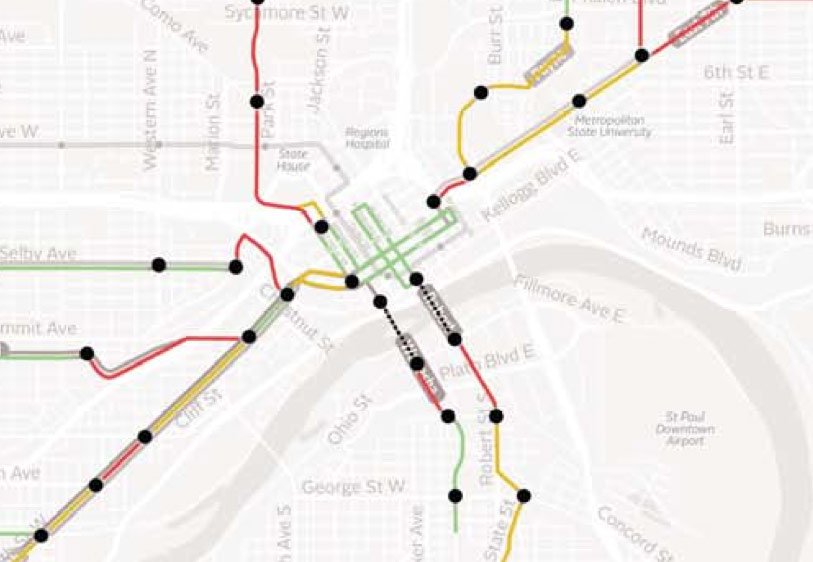 More than any other investment, streetcars can connect downtown to the East Side, West Side, North End, and Cathedral Hill neighborhoods. Done right, a streetcar project can help fill in the empty spaces surrounding downtown, particularly on the West Side flats and on the way up to the East Side. A walkable city requires continuity and connectivity. This is one way to achieve that.

Saint Paul is a city that loves its own history, that is proud to be a bit obstinate. It’s also a place where things change a bit too slowly, particularly downtown. We only have around 7,000 downtown residents. (Minneapolis has more than 30,000.) Downtown office vacancy is quite high. (Minneapolis’s is significantly lower.) Streetcar funding, and the economics of transportation investments, are both complicated issues that I haven’t even touched on it in this piece. But if the costs can be managed in a reasonable way, I think streetcars might just prove to be worth all the fuss. Especially in Saint Paul.

The view from the bluff near my house.