Four candidates are challenging long-time incumbent and attorney Joe Mullery for the District 59A State Representative seat. (The district was renamed from 58A after recent redistricting.) Mullery, who is serving his eighth term, was elected to the seat in 1996. The challengers include former Senate District 58 DFL communications director David Younk; Lind-Bohanon Neighborhood Association board member and treasurer David Boyd; Minneapolis Park and Recreation Board Commissioner and Northside business owner Jon Olson; and writer and community organizer Marcus Harcus.

The first question was whether or not candidates would abide by the DFL endorsement process, meaning that if they were not the endorsee, they would suspend their campaign and not run against the endorsed candidate. Boyd and Harcus said they would not run if they weren’t endorsed. Mullery answered, “I don’t know.” Younk said that in light of Mullery’s answer, he would continue his own campaign even if not endorsed.

To a jobs and economic development question—which included offering possible solutions to the area’s high unemployment rate—Olson (left) said that Gov. Mark Dayton recently proposed a “great bonding bill that leveraged a tremendous amount of money and would be beneficial to Minneapolis as well, because they [the state] could stop taking our LGA [local government aid money] away from us.” Olson said he supports building a Vikings stadium if it is part of a jobs bill, and would support a bonding bill that funds transportation, rail, and bridges.

Harcus said he would support more micro-enterprises. Also, regarding the Vikings stadium, he said, “I have trouble subsidizing billionaire moguls, but if a stadium happens, we want people from North Minneapolis to get those jobs. We need a targeted jobs bill. We need to invest in the education of our children to prepare them for jobs in the future.”

Mullery (left) said, “We need to start funding job training at no cost for people, and combine that with child care.” He said he supports technical training. “We need more mentors for youth, and employers who will hire employees with [criminal] records. Also, we need to increase government hiring. We [the state] are Minnesota’s biggest employer.”

Younk said he wants to see more good jobs for the people of North Minneapolis. Also, the area needs jobs that bring people to North Minneapolis. “We have an education disparity. People need education and training. When someone starts a business on Lowry Avenue, there has to be an incentive for people to hire our workers and make our community better.”

Boyd (left) said the state should offer tax incentives to corporations to hire people from the community. “We need to promote our OICs, such as the American Indian OIC and Summit OIC. We have to rebuild our education within the district. It is very important to have qualified people to do these jobs.”

When asked about their budget priorities, Harcus said that Republicans’ stubborn refusal to raise taxes has resulted in the state “trying the balance the budget on the backs of poor people.” He added that the state needs an equitable tax rate structure, and needs to raise taxes on the wealthy.

Mullery pointed out that the state’s deficit is even larger than projected, because Minnesota does not take inflation figures into account. “We need funds for homeowners to fix their homes,” he said. “We need funds for extra neighborhood police. We can’t cut job training. We have to help people with disabilities get jobs. We need more initiatives in early childhood education and child development and health care.”

Younk (left) said his priorities include providing funding for good jobs, safe streets, and financing and providing for great schools. Boyd said that the state needs to pay back the money it has borrowed from the schools. “We need to focus on getting jobs, so people can save their homes and we can rebuild our community.”

Olson said that education has to be a top priority, as does fully funding it. He wants to see the state restore local government aid.

When candidates were asked to address the problem of getting quality housing in the community, Boyd said that part of the solution is jobs. “A lot of beautiful homes are being torn down by the city. Our foreclosure problem is ridiculous. We have predatory lenders. We need to find a way to save people’s lives and their dignity, things which are lost when the economy changes.”

Olson said the city needs a high quality housing stock. “We need a housing council made up of professionals in the field, to get the great housing stock that people want. People today like three-car garages.” He said many North Minneapolis homes are beautiful, but others have run their course. 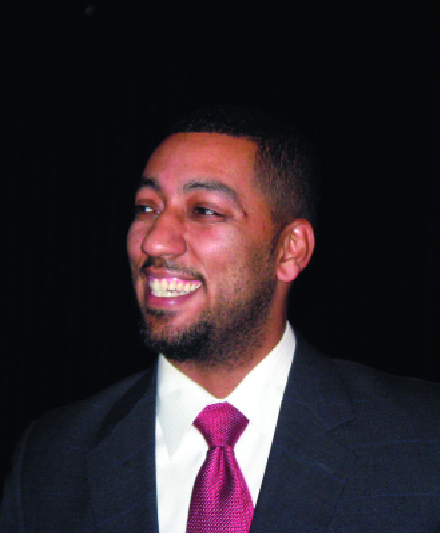 Harcus (left) said that 50 percent of Minneapolis’ 10,000 foreclosures were in North Minneapolis. “We need to hold MHFA [Minnesota Housing and Finance Agency] accountable, and put pressure on HUD [Housing and Urban Development]. State legislators need to put pressure on the federal government to write down our mortgages. So many of us are underwater in our mortgages. We need to fix up homes, create affordable housing opportunities with vacant houses. We need to de-concentrate the poverty.”

Younk said that foreclosures have decimated the North Side, and that re-districting is more pronounced because “many thousands have left the district.”

To a question about adequately funding English as a second language (ESL) education, Olson responded, “Unfortunately, I think people at the Capitol think that is a local problem. People come in from other parts of the world and that’s great, but I think it should be a state focus for areas receiving large numbers of immigrants.”

Mullery said that over the last three years the state has cut back on the amount of money for such programs and also the number of years a child qualifies for it.

When asked about job placement and training support for veterans, all five candidates agreed that they would support such programs, as well as health care for those injured. Younk said, “We need to work with businesses so they know that the training these veterans received in the military can translate into the working world. We need to make sure the support systems are well funded.”

Boyd said, “As a vet myself, I place a high priority on getting retrained to get back into the ‘real’ world. We need better programs [in the areas of] medical, mental health, alcoholism, anger management, housing. Returning veterans would be a great asset to North Minneapolis, especially for helping to curb crime.”

To a final, multi-faceted question from a woman in the audience about what the candidates intend to do about the Republicans’ agenda to undermine collective bargaining rights, public education, reproductive rights, and access to health care, everybody responded that the DFL must do a better job of educating voters.

Boyd said, “This is a core problem of the Republicans trying to destroy the Democratic party. We need to focus on our goals, not theirs.” Harcus said, “The Republican party is dominated by extremists. We need to let voters know that their interests aren’t served by these people.” Younk said, “These are attacks on who we are as DFLers and good Minnesotans. We have to let Republicans see the error of their ways. They are doing great harm to the future of Minnesota. If we work together, we can make things better.”