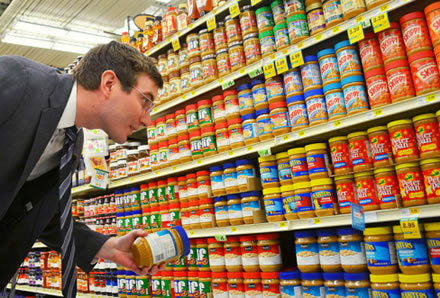 Peanut butter or jelly? Juice or coffee? Dry spaghetti or ravioli in a can? Those aren’t decisions Rep. Jason Metsa usually wrestles with in the grocery store, but the Iron Range DFLer is tightening his belt this week after signing a pledge to live on Minnesota’s minimum wage of $7.25 per hour for five days. Working America, the community affiliate of the AFL-CIO, issued the minimum-wage challenge to state lawmakers in the hopes of drumming up support for a House bill that would raise Minnesota’s minimum wage to $9.95 per hour.

Metsa accepted the challenge, he said, “to better understand an economic situation many of us have never been exposed to.” In events later this week, Metsa will look for affordable housing, consider his transportation options and participate in a forum with actual minimum-wage workers, who earn $290 for working a 40-hour week.

Using the JOBS NOW Coalition’s Family Budget Calculator as a guide, Metsa allowed himself $35 for food and drink. After spending $7 on Monday, he arrived at the Cub Foods in St. Paul’s Midway neighborhood that morning with $28 to spend and, after skipping breakfast, an empty stomach to fill.

“I’m already hungry,” he said, flipping through a stack of coupons he had clipped from the Cub circular.

His game plan, Metsa said, would be to stock up on the staples – bread, milk, eggs and pasta. Any leftover money might provide for a “splurge” item, and Metsa pocketed a coupon for Chef Boyardee ravioli just in case.

Store managers, media members and Working America staff trailed Metsa as he pushed his cart through the aisles, comparing prices and inspecting the in-store specials. It was more thought, Metsa admitted, than he had ever put into grocery shopping before.

“When I shop for groceries at home, I think more about what I’m hungry for or what’s good for me,” he said. “Today it was about how I can get full for $28 this week.”

Desserts and soda – items, Metsa acknowledged, that would usually end up in his shopping cart – were out. So too, Metsa discovered, were meats and other protein items, which proved “too expensive, even with a coupon.”

When he finally reached the checkout aisle, Metsa got more bad news: He’d gone over his budget. A loaf of bread, a container of frozen juice and, yes, a can of ravioli would have to go back on the shelves.

What ended up in Metsa’s cart?

As he bagged his groceries, Metsa said he was confident the food he’d purchased would be enough to sustain him until this weekend. Bree Halverson, statewide director of Working America, asked how that might change if Metsa had a dependent child at home. According to the JOBS NOW Coalition, 35 percent of workers affected by raising the minimum wage to $10 per hour are married or are parents.

He’s single, but Metsa had no trouble putting himself in those shoes. “I think I’d drop my car insurance and make sure my kids could eat,” he said. “Otherwise, it would be impossible. You couldn’t do it without being on public assistance.”

For regular updates on Metsa’s minimum-wage challenge, follow on Twitter via #mnwage, or @workingamerica or @jasonmetsa. Updates also will be posted on Working America’s Main Street Blog and Working America’s Facebook page.