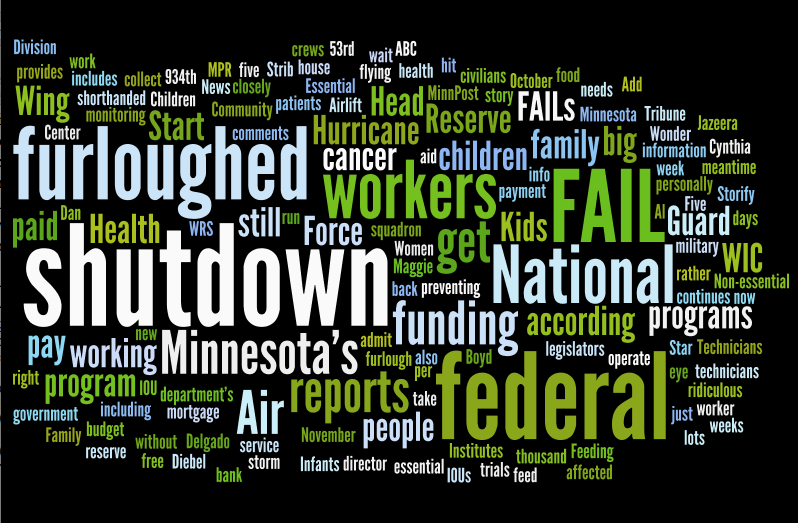 So what’s the shutdown actually doing? Here are five big shutdown #FAILs, and a Storify (below) with lots more. Are you personally affected by the shutdown? Add your story in the comments.

FAIL #1: Kids with cancer: The National Institutes of Health has furloughed 14,700 workers, according to ABC News, and federal health programs can’t admit new patients to trials, including “about 30 children per week, 10 of whom have cancer.”

FAIL #2: Minnesota’s National Guard and Air Force Reserve: Minnesota’s 934th Airlift Wing furloughed 300 Air Force reserve workers. The Star Tribune interviewed furloughed worker Dan Delgado, who said: “How do you feed your family? How do you house your family? It’s ridiculous right now.” More than a thousand National Guard military technicians are also on furlough, according to the Strib.

Non-essential federal workers just get furloughed — no work, no pay. “Essential” federal workers are still working — but they won’t be paid until the shutdown is over. In the meantime, they get IOUs. Wonder if the bank will take an IOU for a mortgage payment?

“I will say that it’s probably a few days rather than weeks,” said Maggie Diebel, director of the department’s Community and Family Health Division. “We’re monitoring it closely. We can’t operate the WIC program without federal funding.”

FAIL #4: Hurricane watch: Al Jazeera reports that the National Hurricane Center still needs information and that is an essential service — but the people flying into the eye of the storm to collect the info will wait for their pay:

“But with 250 civilians and Air Reserve Technicians of the 403rd Wing, which includes the 53rd WRS, furloughed because of the government shutdown, the squadron is shorthanded — and working for free. The crews are to be back paid when legislators agree on a budget.”