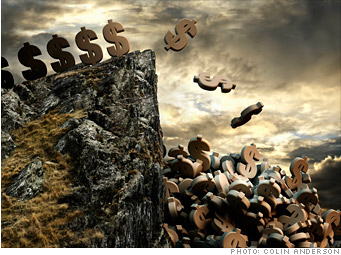 The phrase is often credited to Ben Bernanke, but variations of it have been around for decades. The “Fiscal Cliff” that went largely unmentioned during the campaign now dominates the talk out of Washington. It is probably the most important thing that will happen in the next Congress, and it will certainly set the tone for the end of the Obama administration. Yet almost no one has taken the time to explain what’s at stake in plain language.

There are three major deadlines approaching, all of them somewhat negotiable. The first deadline is the expiration of many tax cuts, including the “Bush tax cuts” and the payroll tax reduction all expire on 31 December 2012. Then, on 1 January 2013, the “Budget Control Act” passed as part of the Debt ceiling negotiations in August, 2011, mandates massive spending cuts – $109B from Defense and the same from non-defense discretionary spending – if no other deal is reached. Finally, sometime in February 2013, the debt ceiling will have to be raised again from $16.394T or the federal government will run out of borrowing authority.

All of these deadlines are artificial and can be changed. However, simply kicking the can down the road to a much later date will continue to spook Wall Street, which has become very nervous about gridlock and the inability to control the massive deficits that are being run. Most agree that a preliminary agreement designed to pacify jittery investors will be passed to give Congress and the President more time to forge a real agreement.

What will any agreement look like? There are two schools of thought – a massive patch or a process that creates more fundamental fix. The patch is actually much harder to imagine, especially given Republican reluctance to go along with Obama’s plan to raise taxes on the wealthy. Speaker Boehner has signaled a new willingness to allow taxes to increase by eliminating many deductions, as have many Republicans. No one – Republican or Democrat – is sure if enough such deductions can be found yet, however.

The longer, more fundamental process is the Simpson-Bowles framework for negotiations. No one has proposed any other comprehensive solution. This was created by the National Commission on Fiscal Responsibility and Reform by President Obama in January 2010, but their recommendations have languished as being too much for a divided government to take on. Support has been building gradually since then, however, and the framework has its supporters, especially among Senate Democrats like Chuck Schumer of New York.

The sticking points, no matter what, are “entitlements”, specifically Medicare and Medicaid. These programs, costing $835B in 2011, are projected to increase at over $10B per year with no changes – and many agree that these estimates will be revised upwards. Obamacare improved its long-term health, but there are fundamental problems that remain. Republicans are unwilling to enter negotiations without these on the table.

With all these actions pending, there is no agreement as to how the next few months are likely to play out. Support for the Simpson-Bowles framework is growing, but everyone agrees that it will take months of negotiations to reach fruition. That means that the three components of the Fiscal Cliff will have to be delayed with continuing legislation.

The problem will be how it plays out in the press. A delay in the negotiations in order to buy time for the Simpson-Bowles process to play out would probably be received well by a very nervous Wall Street, but only if the politicians involved appear serious about making it work.

What remains important about the Fiscal Cliff, however, is that this is almost entirely a political problem. It is one of artificial deadlines and perceptions as to how Washington will put the nation on a path to fiscal sanity and reduce the current deficit, now at $1.1T every year. Without any action, it would continue to rise to $1.7T annually by 2020 according to most estimates. Without a deal, the need for continued borrowing by the Federal government would dominate the bond market and make a sustainable recovery difficult if not impossible. There are many ways to reduce this deficit, particularly with the roughly $700B Defense budget on the table, but gridlock has prevented anything substantial from happening.

There are many paths to avoiding the Fiscal Cliff, but all of them require cooperation between the parties and branches of government. That is the issue in its entirety. How it will play out is still unknown, despite deadlines that are less than 50 days away. Investors are already spooked badly, but Washington has finally taken notice. Something big will happen – one way or the other.

This article is only a summary designed to help understand the Fiscal Cliff and its implications. If you have something to add please do! This is a critical issue that will determine the near-term future of our nation like nothing else.