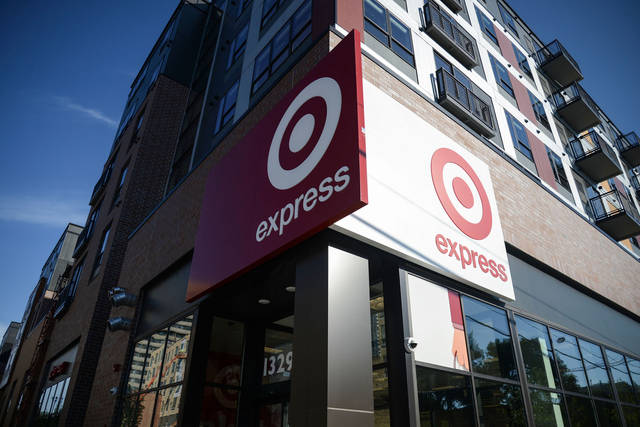 (Photo by Holly Peterson) The new TargetExpress in Dinkytown on the corner of Fourteenth Avenue and Sixth Street is set to open on July 27.

In the University of Minnesota area’s dinkiest neighborhood, Target is set to debut its smallest store in company history.

On Wednesday, the Minneapolis-based retail company will open the doors to its first TargetExpress — a scaled-down, 20,000-square-foot space at the base of The Marshall apartments on 14th Avenue Southeast and Fifth Street Southeast.

In a space that’s a fraction of an average Target’s size, TargetExpress will carry roughly one-fifth of what its normal stores do, including school supplies, groceries, household items, home décor and a small electronics section. It will also sell cosmetics and health and pharmacy items, Anderson said, as well as some University apparel.

Prices will be similar to local Target stores, Anderson said, but comparatively priced to competitors in the campus area.

He said TargetExpress, in part, aims to relieve University students from a scarcity of grocery near campus by offering fresh produce, meat, deli, bakery and frozen and dry food items.

“The biggest thing we learned … is that students were telling us there’s nowhere to get fresh produce,” Anderson said. “Dinkytown is sort of a desert for that.”

Cayce Gearrin, leasing and marketing manager for The Marshall, said an in-house grocery store has been a selling point for filling the apartment complex.

“[It’s] a bonus for residents,” she said. “That’s been one of the things that we hit when we tell people about our apartments. It’s the first of its kind in the world.”

A contract has yet to be set for the building’s other ground-level retail space, Gearrin said.

Mathematics senior Michael Bolland, who lives in the Como neighborhood and travels about two miles to buy his groceries from Rainbow Foods, agreed there’s a lack of produce in Dinkytown and said he would take advantage of the new pared-down Target.

About 85 percent of the store’s staff is made up of college students, Anderson said, five of whom will live in The Marshall.

It’s only blocks away from the home of employee Andrew Blom, an engineering sophomore, who applied for a job at TargetExpress the same day he heard the store was opening.

Blom said he thinks the store, with its student-heavy staff and student-catered stock, will be a success.

As the company tests out its inaugural small-store format, it will openly solicit feedback from students on product availability and shopping experience.

“We think we have a really good assortment that people will be excited about,” Anderson said. “We’re testing; we’re learning as we go. … We’ll be able to make those changes really fast.”

After experimenting with its upcoming Dinkytown mini-store, TargetExpress could crop up in other urban areas where there isn’t room for larger retail, Anderson said.

“It’s a testing ground,” Anderson said. “Could we put stores [where] there’s a need but it’s not big enough for a regular Target or CityTarget?”