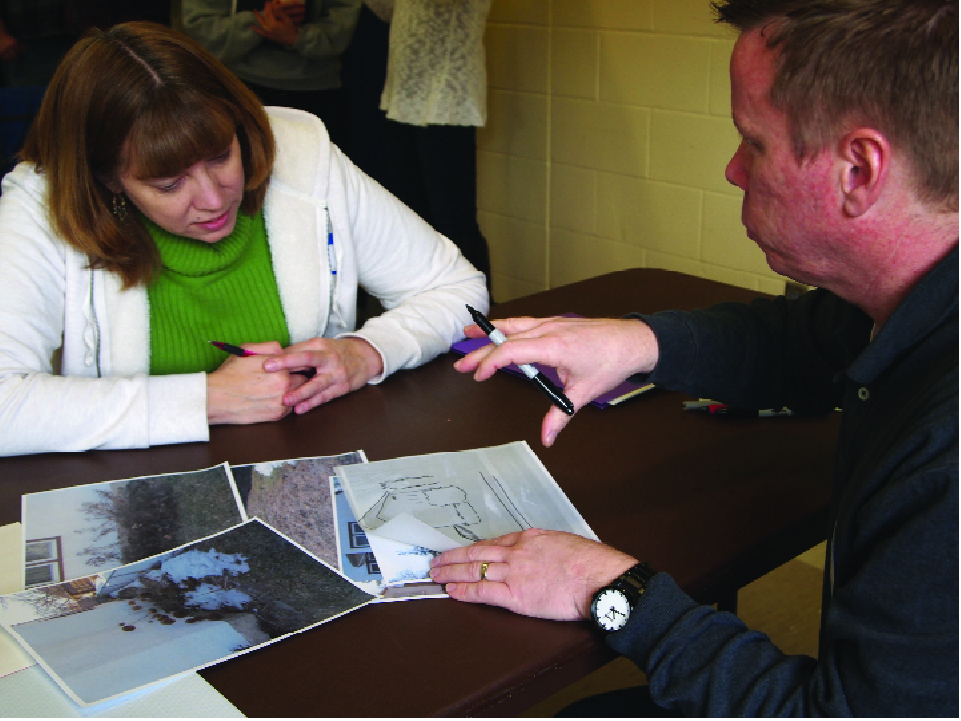 They stood in line for the one-on-ones, as Northeaster Steve Modrow of biota Landscape Design + Build, Amy Chapman of Victory Neighborhood and others offered quick pencil and tracing paper consultations for attractive home landscaping.

The morning of April 6 started with a presentation on how to get started. Let’s listen in:

Chapman’s neighborhood is much like parts of Northeast, with rows of tudor style houses. She introduced her talk with an example from the active Facebook page called “North Home,” where the owner of a Dutch Colonial house asked for hints on re-landscaping after the 2011 tornado took out their trees. “She got some good advice and some bad advice,” Chapman said.

First step is to start a folder, whether on computer or tangible, to collect stuff that you like. Take photos, clip from magazines, go to the Minnesota Landscape Arboretum. “Everything they have is hardy to our landscape climate. There are lots of examples, and you can take pictures,” Chapman said. She suggested going on garden tours such as Victory’s annual tour of eight to 10 yards.

“Ask a neighbor to take a look at your yard,” and to be honest with you. “Take photos, have people post comments” on Houzz.com, an online tool.

She showed slides of what does and doesn’t look good to her. Cyclone fencing, while cheap and practical for keeping dogs in yards, is not attractive. Bamboo fencing may be a good substitute or screen, vines can be encouraged to grow and hide a cyclone fence, or small trees and shrubs can be placed near it.

“Our big mature trees are a nice backdrop to any home.”

If you don’t have time or resources to do much in a yard, a spot of color will help, as simple as a container on the step or window boxes. The Victory Neighborhood in North Minneapolis has a lot of iron window boxes.

Chapman’s a fan of curly willow and the northern pin oak for year-round interest. She highlighted grasses such as Karl Foerster and other plants that look interesting in winter. It’s good to leave the stems and seed pods to feed wildlife and shelter the new growth as well as providing winter interest.

Homeowners should do a site evaluation; Chapman suggested linking to Minnesota Extension Service for hints. Record the direction of the sun and the number of hours, how the sun moves. Soil type? “We mostly have sandy loam, that’s good, we are lucky,” compared to all clay or all sand.

“Start with your trees, get the opinion of an arborist.” Trees around a house provide natural air conditioning, “it’s the west and south sun that you want to block.” Some trees, if diseased or in the wrong spots, may have to come out.

She warned against the “ring of death,” where homeowners pile soil in a planter around a tree, which may not seem to affect the tree at first. But it encourages improper root growth that within 10-15 years will choke off the tree. Don’t cut tree roots to put a patio on top. A mature tree adds value to a home, and costs a lot to take out. Start another tree close by if it looks like you will be losing one. 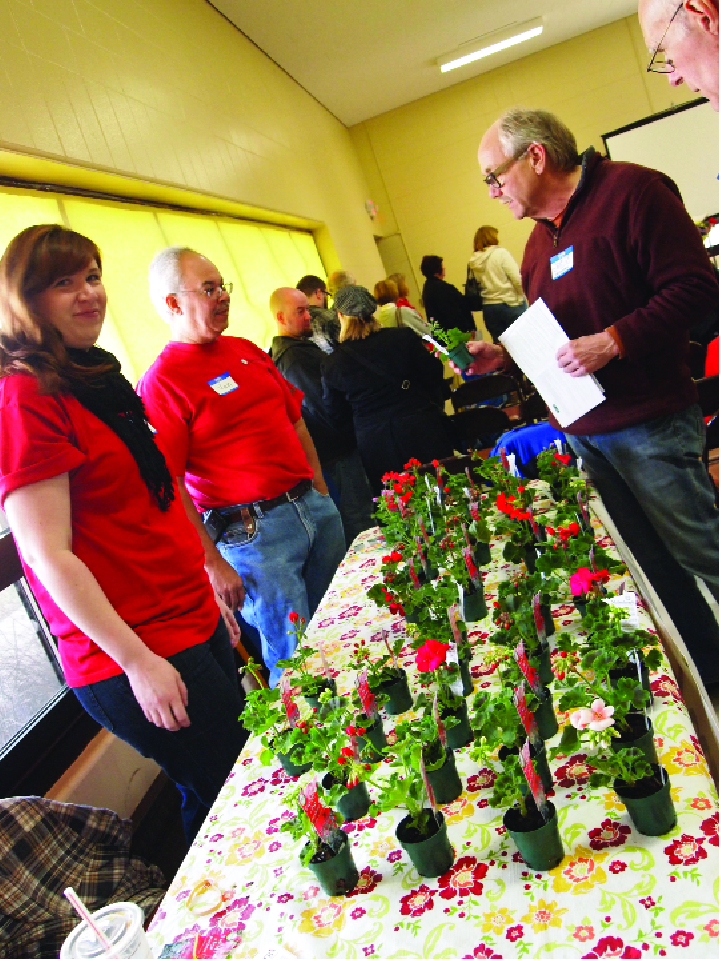 Residents check out spring plantings and line up for landscaping consultations.

On to water and drainage issues: During and after rain, does water puddle outside? Does your basement get wet after a rain? This can be mitigated with a 10 percent grade encouraging water to run away from the house.

Chapman showed slides of homes consumed by arbor vitae bushes and other shrubs allowed to grow too long unchecked. “Look at security issues.” Tim Hammett (a Community Crime Prevention Specialist who attended as a resource) says to keep stuff away from the house that creates places to hide. He suggested window boxes make it difficult to enter a window. Fences? Stick to four feet high so you can sit in your yard with privacy but be able to see and be seen standing up.

She encouraged people to photograph the views from their home and as their neighbors see the home. She showed how on her own property they had planted trees strategically to hide a boat “which will be sold…but then when my husband saw these photos he said maybe we can keep it.”

Chapman talked about minimizing inputs—of chemicals, water, time, labor and money; designing for water quality and wildlife habitat. “Plant an oak tree, it will support up to 534 species of butterflies and moths.” She suggested a book by Douglas Tallamy, Bringing Nature Home: How Native Plants Sustain Wildlife in Our Gardens. And a website, www.wildones.org.

Modrow discussed the tools needed for landscape design: A pencil, tape measure, and paper. “Don’t go overboard, you don’t need a computer program.” Measure with a friend, how big is it, and how much space between. A drawing doesn’t need to be to scale but should show each measurement.

“Note what you want to keep and what you want to tear out. Then document, take photos. We get used to seeing the bad stuff” and a photo drives home how tired or odd something looks. Modrow suggested using free technology such as Google Maps or Bing to help with site measurements and front street views—sometimes the photos on these services, being older, can help show how things are growing out of control.

“Grab your tracing paper.” It’s available at office supply stores “or even Christmas tissue paper” will do the trick. “Do overlays of shapes you find interesting. Draw in the house, too. You can go through several tries.” Create the look, visualize and sketch your dream. A consumer may not know the names of plants but a consultant such as Chapman or garden center staff can help select plants to fit those shapes and the conditions on your property.

Both speakers said “don’t be afraid to tear out a shrub,” and they encouraged people to start small if their time and budget don’t allow doing everything at once. Modrow commented that city lots are small “but you can do a lot.” He added “don’t overlook lighting” and showed how a house exterior can be softly lit with lights on sensors for increased safety and interest, without shining light in the windows.

About 30 people attended, including a few children who enjoyed the display showing root lengths of native plants. Many came, as instructed, with photos of their home and problem areas for the one-on-one consultations.