Sheriff Bostrom took over the Ramsey County office, this January, after winning last November over four-term incumbent Sheriff Fletcher with a 15% advantage. Part of the required transition is an audit required by law. This financial audit applies to previous Sheriff Fletcher financial and accounting process only.  Current Sheriff Bostrom is already implementing changes to fix all identified problems.

Even in the bland language of KPMG, a corporate auditor who is paid by the entity that they investigate, there is a stunning conclusion:

Based on these limited procedures, Internal Audit recommends management consider creating standardized written procedures for other funds that are categorized as special fund outside of the General Fund operating budget. These procedures should include appropriate safeguarding of assets and segregation of duties as well as a focus on collections, allocation and fund disbursement.

Based on the management comment noted above, the Sheriff’s Office has requested additional detail review be performed by Internal Audit of the fund accounts representing the highest risk. 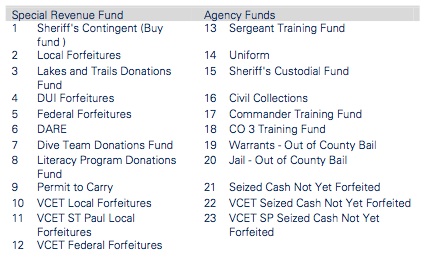 This investigation will be part of the second phase. The first phase found even more to be concerned about in the way that Sheriff Fletcher ran the Sheriff’s office, after the fold.

Based on my experience as consultant for 10 years, let’s take a closer look at that audit done by KPMG, published March 7, 2011. First of all note that the legislative audit office works for people who want to find the truth and any problems not the target, while KPMG is a company hired and paid by the people who it investigates. Therefore you can expect all problems are downgraded to minor or less. KPMG wants to be rehired and therefore making its employers look bad would lose business. Remember that Enron was rated well by audits from Arthur Andersen (renamed Accenture) until its failure. So with that in mind lets look at the 2 “minor” issues and the 4 “insignificant” issues for a “satisfactory” rating, translating these corporate-speak terms into 2 alarms and 4 concerns, in ordinary language.

Let’s also make clear what the audit does not do. It does NOT cover the WISDOM of a financial decision, only that procedures and process was followed and that there were funds to cover the spending. Since the process of cutting checks requires going through accounting software, it is very hard not to comply with the requirements of the process. So while Sheriff Fletcher was sending deputies to Iowa and Pennsylvania on far-flung terrorism hunts, as long as process was followed, this would not trigger a red flag.

Also another misconception is that everything was checked it was not. Note that this quote from the audit specifically says “small sample of transactions.”

Detail testing primarily based on management inquiries and examination of support documentation, was performed over a small sample of transactions to verify the effectiveness of key controls and adherence to the policies and procedures.

Also it was not clear how much that missing pieces in the process were covered. We know from interviews that Sheriff Fletcher had people assigned to work different than the budget that they were paid out of. That did not come out in the audit, although the fact did come out that equipment had different people than who was listed as having the equipment. Because of sampling and what we know that is not covered, we can already assume that the audit missed much more.

Let’s review what the audit did find. And even though current Sheriff Bostrom is fixing the process, we can see that the previous Sheriff Fletcher did have serious and wide-ranging accounting management problem, which we all guessed from the fact that he was always over budget.

1) Travel Expense Advances: Manual Log for travel expense advances that is not tracked in a timely way to receipts for that travel and/or reimbursement. It was not clear where there is any coordinated tracking, timely or not. My question is “Is there a process where the advance are ever matched up with receipts/reimbursement?”

2) Petty Cash: “Impact: Petty cash may be used inappropriately and not detected.” was the concluding because there were no surprise audits of the seven petty cash accounts. My question are “Are there any controls and receipts at all for petty cash?” and “What was the total amounts spent out of all the petty cash accounts?”

3) Detention Property and Money: The Republican National Convention had many of the 800 arrested people, most of whom were never even charged, complaining about missing stuff and missing money. Off-the-record interviews with previous detention customers indicate that this may be on ongoing problem. The audit in its small sampling also found issues.

“The inmate is required to sign the check stub to indicate that they received their funds. Internal audit testing over a sample of eight checks noted two checks that had not been signed and there was no documentation to indicate that the checks were mailed. Additionally, the check stub for one check in the disbursement report could not be found to indicate whether it was signed or mailed…Root Cause: Proper documentation was not retained for the inmate cash disbursement and follow-up did not occur.”

4) Property Tracked and Located: The people who have property and the people who are listed as having the property is different. In the small sampling, the audit noticed “For example Internal Audit called two cell phone users and noted that one user that is currently in custody of the phone was not the assigned user.” My question is “Have we even tried to identify and find all the property that Sheriff’s office has?”

5) Employee Leaves Approved and Tracked: The audit found that previous leave absences were not very well tracked. The Sheriffs office has switched to the readily available county system.

6) Cash Receipts: The audit found “no standard written procedures for handling and safeguarding of cash receipts.” That should be fixed as the new manual comes out this June.

Remember this type of fast and loose financial handling came from a top law enforcement officer, Sheriff Fletcher, who used to be able to use the media to attack people for far less evidence than what we see here.