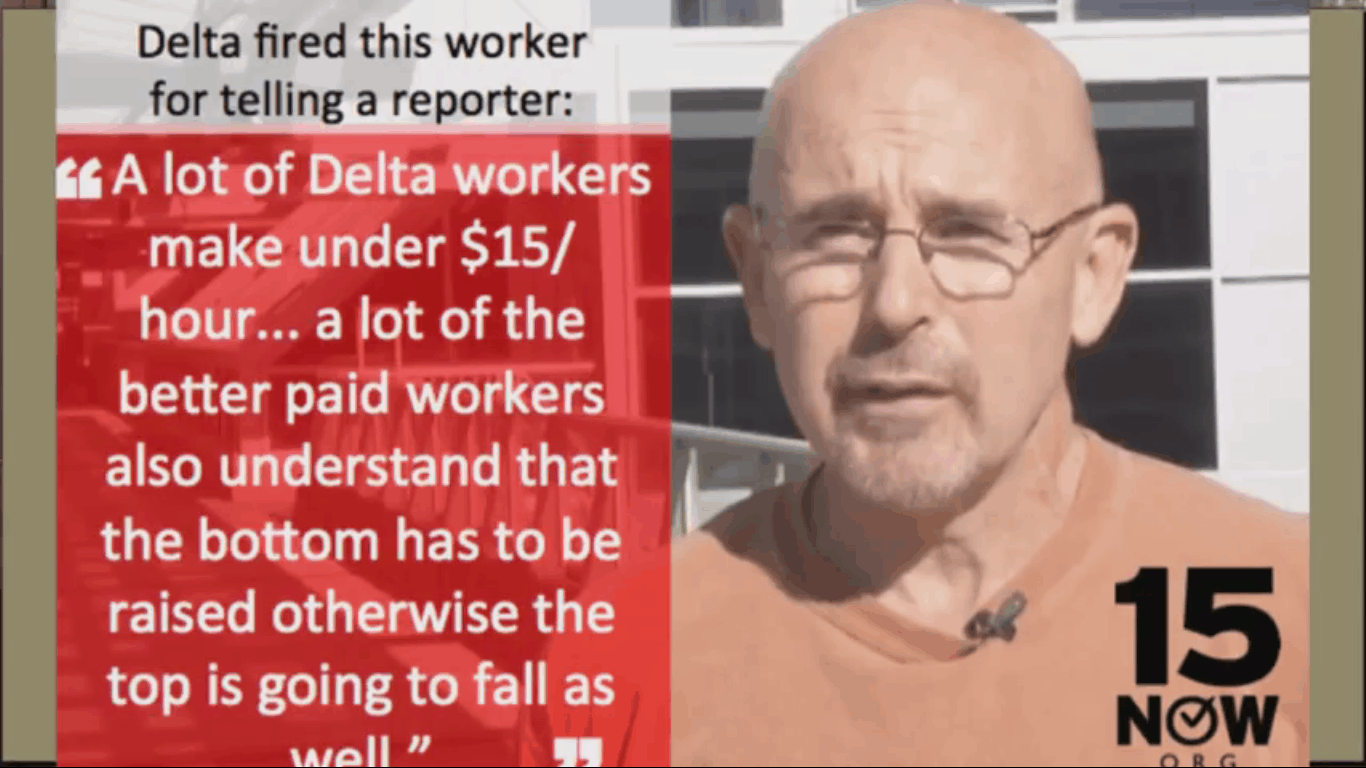 (Still from video by Labor Education Service, below0

Hedges, a 26-year airline employee and known union activist, was fired on Dec. 2 for comments he made in a Workday Minnesota video in support of the campaign to raise the minimum wage at the airport to $15 an hour.

At the monthly Airports Commission meeting, Hedges recited the words that got him fired – and challenged commissioners to take a stand in support of workers.

“I want you to make it clear to Delta that they stand alone on this,” Hedges said.

Many airport workers are participating in 15 Now Minnesota’s campaign for a $15-an-hour minimum wage at MSP. Employees of some airport subcontractors, such as Air Serv, have been engaged in an organizing drive with Service Employees International Union Local 26. Ground workers and flight attendants at Delta are seeking union representation with the International Association of Machinists.

Members of 15 Now Minnesota and SEIU Local 26 packed the meeting room in support of Hedges. 15 Now member Chris Gray said workers are “getting fired and they’re getting intimidated and dragged into their manager’s offices” when they speak out.

“You can issue a clear statement: ‘We are worried about what is taking place under our banner at our airport,’” Gray urged the commissioners. “That type of statement would go a long way to showing workers they don’t have to be afraid . . .”

Several commissioners then indicated their support for a “labor peace ordinance” at MSP that would apply to contractors. These ordinances, such as one adopted by the City of Minneapolis in 2007, require contractors to remain neutral when employees try to organize.

Commissioner Carl Crimmins said it was time for the commission “to have a good, healthy debate about a labor peace ordinance.” Crimmins is former president of the Minnesota Pipe Trades Association, a labor organization representing 9,000 plumbers, pipefitters, sprinklerfitters, gasfitters, HVAC and service technicians throughout the state.

Commissioner Pat Harris, a former member of the St. Paul City Council, also spoke in favor. “They [labor peace ordinances] make for a great workplace, a fair workplace,” he said.

Commission Chair Dan Boivin said he agreed and would put the issue on the agenda for the commission in the first quarter of 2015.

Also at the meeting Monday, the commission approved a paid sick leave policy for airport workers.

Hedges, meanwhile, is pursuing his firing through Delta’s internal appeal process. If the decision is not overturned, he said he will sue the airline in court for wrongful termination.