Big Man tried to circumnavigate the fire building process recently by putting up a screen on his computer of a roaring fire. Every ten minutes or so, an arm or hand appeared to add a log while the audibly crackling fire roared on at a steady pace. The kids and I were unimpressed, and he was put out that we barely chuckled.

“And it’s fun,” I replied. He did not disagree.

This made me think of a time during what would be our last summer with The Original Big Man. My Big Man had purchased some wish lanterns. He thought they would be fun, which really meant it would be a new way for him to play with fire. The windy conditions and a recent drought made this a less than ideal time for such a pursuit, but what he really didn’t bargain for was the seriousness we brought to the task. He seemed mystified when I toted out the Sharpies so that we could write out our wishes on the pale cream cloth before we lit them. “Can’t you just think it?” he asked before he realized how silly this sounded to someone like me. Everyone save for Thing 2 who opted to draw pictures of mythical marine life followed my lead and wrote out explicit and sincere wishes. Big Man’s face was a picture of surprise when he noticed our furrowed brows and thoughtful expressions.

This memory makes me think of a great book I am reading by Karen Karbo about Julia Child. It’s called Julia Child Rules: Lessons on Savoring Life. Among the many lessons gleaned through studying how Julia lived her life, one is that she took all of her pursuits seriously whether they were labelled fun (partying at school) or work (classifying top secret information for the OSS). It could be hard to distinguish which was which because no matter what she took on, she dove in wholeheartedly. 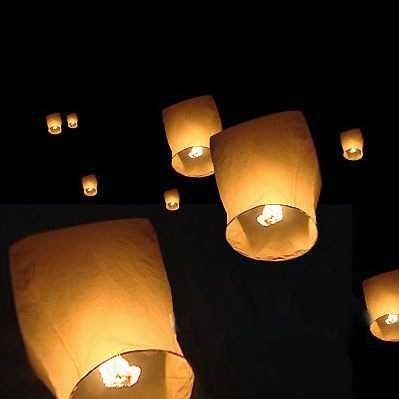 I am not saying that writing on a paper lantern is work, but what we wish for? what we hope for and seek? These are the big things in life. Once you get beyond the Santa phase, you realize that which you desire is a pursuit that requires some work. And if it is the work you are meant to do, fun seems to be it’s companion.

There are certain things that will always feel like work to me: cleaning, wrapping gifts, laundry, weeding, having multiple children over for birthdays. None of these brings me a whole lot of joy. But the moments we live for are those in which we get lost, where time escapes us, or where we feel suspended in a pocket that feels separate from real life. For me it is in a book or in a sentence or in the creation of a cake or some oddball recipe or unexpected adventures with my tribe of Things. That cliche about getting lost to be found? I get that. When something takes you away, it is really introducing yourself to you.

And so of course we don’t want a fake fire or a speed round at wishing. We want to do the work of the real thing, starting small with the kindling, laying the foundation, and later stoking the fire. And if you are a reader of mine, or someone lucky enough to know my Big Man, it will not surprise you one whit to know that it is Big Man who has taught each of us how to slowly and methodically build a fire that lasts. And certainly we want think a bit before we inscribe our wishes with permanent marker because these are the promises we will sweat for, the declaration of work we will do on behalf of ourselves. When the time is right, we will release them up and out to the universe in the hopes that it too will do its part.