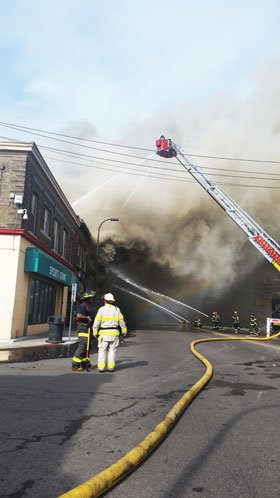 A Wednesday (April 15) early morning fire roared through a row of businesses and residences leaving many homeless and one high profile community organization in search of new operating facilities.

The fire that started in the UnBank, a check cashing business located at 913 W. Broadway in north Minneapolis, quickly spread to neighboring businesses and second floor apartments in the connected row of the 900 block of West Broadway Avenue. The first call to the fire department came in around 8:30 a.m. and by 9 a.m. the fire had already claimed several of the block’s businesses and apartments. No injuries were reported but there was extensive property damage along the block.

In addition to the UnBank, a longtime neighborhood grocery store, Brix, was lost, as was the headquarters to community action group, Neighborhoods Organizing for Change (NOC). While the cause of the blaze has yet to be determined, there is speculation that the fire could have been intentional.

“All we know is that the scene is under investigation, but some folks on the (fire) department that I talked to said it’s unusual as to how quickly the fire spread and how hot the fire got,” said Anthony Newby, executive director of NOC.

Calls to the Minneapolis Fire Department were unreturned.

Newby said while his organization is without an office, he’s most concerned with those who are without a home due to the blaze.

“Our first concern is for the residents who were living in the apartments on the second story,” said Newby. “Our thoughts and prayers go out to them.”

More than just thoughts and prayers, NOC is sending relief as well. The organization known for fighting for workers and voting rights set up a funding campaign that ran until noon on Thursday (April 16), with 100 percent of the proceeds going to assist the apartment residents. According to Newby, within the first 20 hours of the campaign the group raised more than $12,000.

Without a home itself, NOC later began a funding campaign to keep its operation afloat.

“We don’t have an office, a pen, a pencil, paper, a chair to sit in,” said Newby. “Everything we use to function as an organization is gone.”

While firefighters were still battling the blaze, workers for NOC were doing what they are known to do, which is organize. The group was granted temporary shelter just a block away in the offices of Juxtaposition Arts and workers used cell phones to reach out to potential donors. Newby said several unions have come to the group’s aid, offering operating space and Emerge, an employment agency in the 1100 block of West Broadway, has also offered the group a temporary home.

“To see the community come together like this is a really good thing,” said Newby. “We’re going to come out of this on the other side a bigger and more powerful organization, but we need the community’s help to do so. Thankfully, there’s been a tremendous outpouring of support.”

Rep. Raymond Dehn (59B), who on the state level represents that portion of West Broadway, said he fully expects the area to recover.

“This is yet another devastating blow to our community after the tornado of 2011 destroyed much of north Minneapolis,” said Dehn in a statement. “Broadway has continued to be an area where we’ve seen revival in north Minneapolis and I’m sure we’ll continue to see that spirit after this fire is extinguished.”

Newby said a great concern to him is what will happen moving forward to the now gutted block of West Broadway.

“The community has to have a say in what happens here. We want the community to get involved because oftentimes developers swoop in and whoever’s got the biggest check gets the prize,” said Newby. The NOC executive director asked for citizens to voice their concerns over any pending development by emailing NOC at info@mnnoc.org.