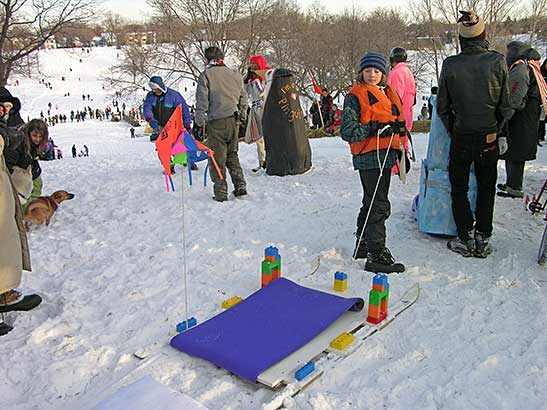 January 30, 2011 at Powderhorn Park in Minneapolis and the Art prepared to parade down the snow covered slope. This was the 4th Annual Art Sled Rally. There are links to other images that may be conveniently accessed via the Art Sled Rally website. [Art Sled Rally home page is broken –here is another page of the site] For me it is a pleasure to see some of the action that transpired as the Art progressed along the course. flickr has been amassing images too. facebook has tags for the event as well.

It was another grand exhibition, with plenty of sights not quite explainable, but oh so photographic. Some were themed on childhood heros, such as Teenage Mutant Nija Turtles. A number of playes scored with their passions, although the entire event went without judging. But everybody loves cephalopods!

Fantasy reigned in double delight, as the unexpected took flight. A seasonal holdout buzzed the slope but bothered no one, with stinging intent. Hello Kitty! waits patiently for her trun. A bit more simplistic then some sleds. A slightly more modest display of fireworks used sparklers mounted on headgear which were lit before the begining of their run. I wonder if there was an connection with the St. Paul Winter Carnival’s Vulcans?

The dastardly Snidely Whiplash adjusted his cape before he mounted the train engin cab to begin barreling down the track. Of couse Nell Fenwick is tied to the tracks ahead, again. Oh where?, oh where is Horse? This Dudley could not help but think of the Rolling Stones when viewing this entrent. A little bit of Beggars Banquet? Lets have some Sympathy for the Devil. Their Satanic Majesties Request is set up with fire-breathing exhaust ducts.

My commentary is my conjecture, and many of the creators may not have any idea of what connections I have made are referencing. I do know that it was a most pleasant way to spend a winter’s day. California dreaming? -not me, I have access to the Art Sled Rally at Powderhorn Park.