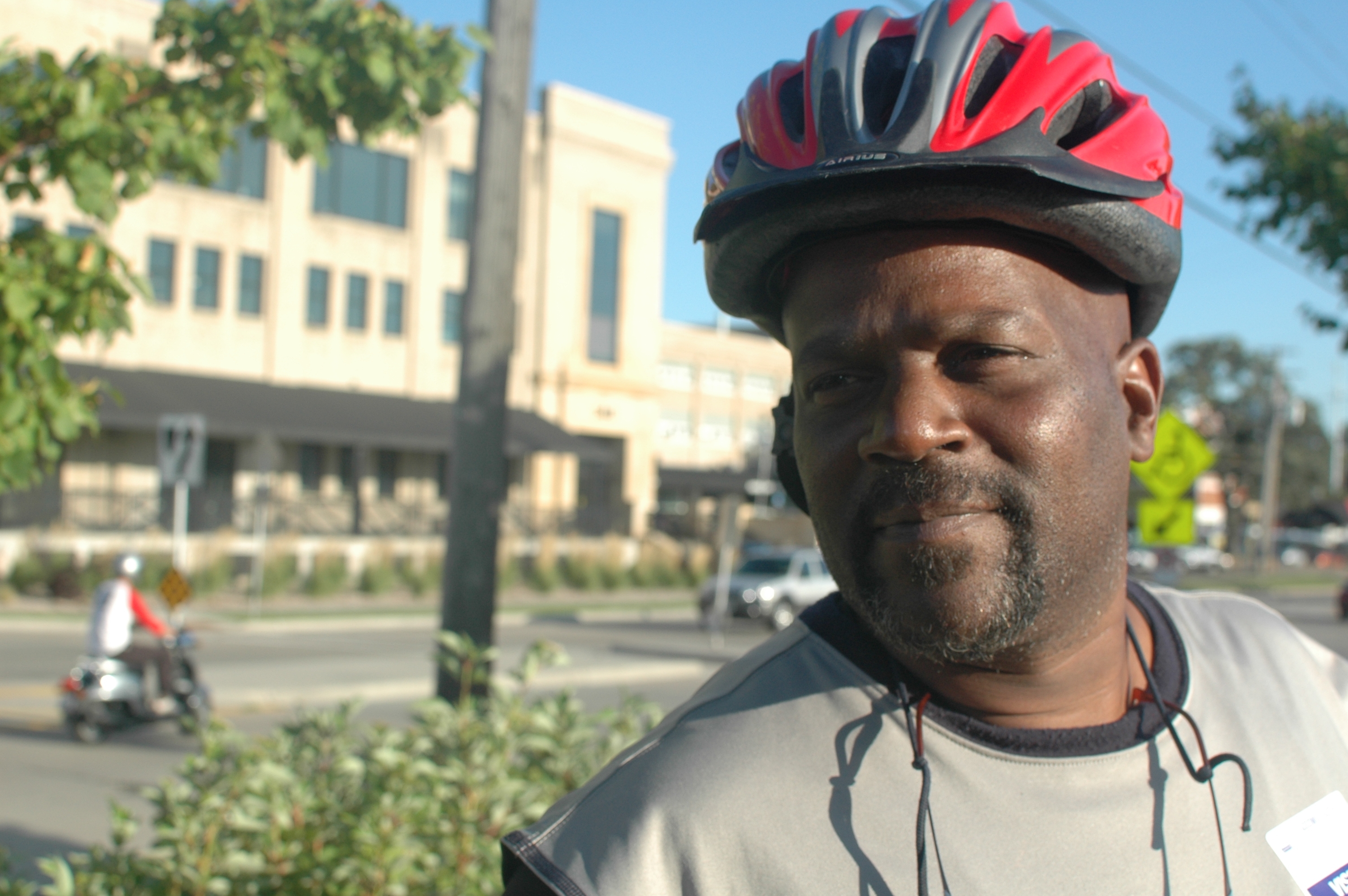 Bobby Hicks of Minneapolis rides a bike he got from the Community Partners Bike Library.

Before Bobby Hicks got his bike, he took the bus to his favorite fishing spots.

He loved hauling home a bucket full of future dinners, but as for his fellow passengers — not so much.

Hicks is one of close to 100 people who have been lent bikes through the Sibley Bike Depot‘s Community Partners Bike Library program in St. Paul. Hicks said he first learned about the opportunity from a sign at Hope Community, one of 10 social service organizations that refers its clients into the program. Hicks had to attend two courses covering topics like commuting and essential repairs, and then the Depot lent him a bike — as well as a helmet, reflectors, lights and lock — for six months.

Hicks joined other bike enthusiasts at the Goodwill/Easter Seals building in St. Paul to celebrate the early successes of the two-year pilot program, which kicked off in January. It has set a goal of lending 200 bicycles in its first season.

One of the evening’s speakers was recent cycling convert Tia Williams. Up until just recently, the mother of two hadn’t been up on bike for 15 years.

Williams found out about the program through her AmeriCorps VISTA assignment at Hope Community. Part of her job was interviewing people who’d been lent bikes, and their positive testimonials got her thinking that maybe she should give biking a try.

Lucky for her, they had one bike left over.

“And it fit perfect,” she gushed.

Replacing some of her car commutes with biking has gotten her back into touch with nature, as well as helping her save on gas, Williams said.

Joan Pasiuk is the director of Bike Walk Twin Cities, which gave Sibley a $193,000 grant to open up the Bike Library. Bike Walk got the federal money with a Congressional mandate to help people stop driving and reduce barriers to bicycling, she said.

“The program that Sibley put together is exactly what Congress intended, but they never would have thought of it,” Pasiuk said. “It’s masterful.”

Ward 1 Council Member Melvin Carter III commended the program for being “so creative and commonsense.” For its part, the city council will keep trying to build better infrastructure so that biking is safe and accessible for all citizens, he said.

Seventeen-year-old Dorothy Pluviose, below, found out about the program through Pillsbury United Communities’ Waite House. The Cristo Rey High School student used to take the train to her part-time job at Burger King, but that was before Sibley outfitted her with a sharp turquoise steed. 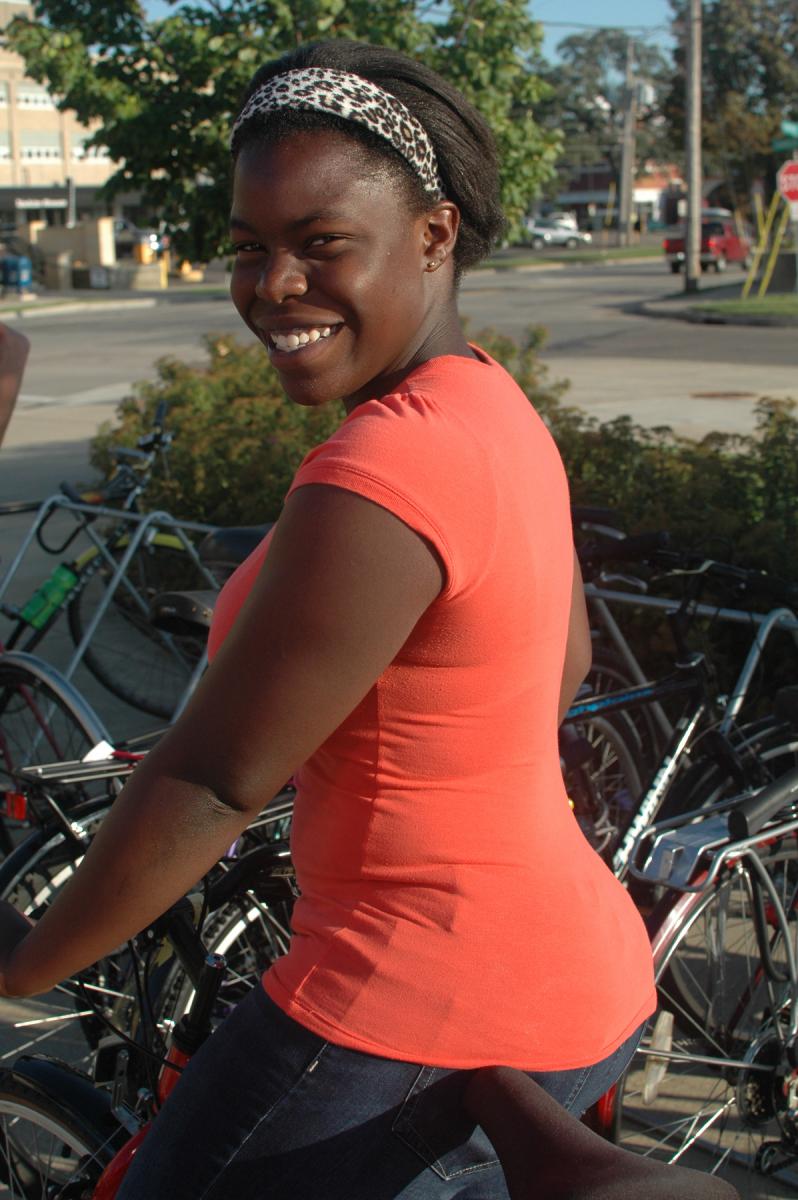 “I don’t have pay for the light rail, plus I use leg power,” she said with pride, adding that the bike’s fenders keeps her fashion dry in the rain.

“As long as they follow the rules of the program, and they need the bike and they’re using it, we’re really flexible,” she said.

And, when their loan period does come to an end, riders like Proviose can participate in Sibley’s Earn-A-Bike Program, which helps people who might not otherwise be able to purchase a bike get a good working machine.

Daniel Clark, below, earned this bike from Sibley after he put in 25 hours volunteering there with kids. He heard about the program from the Dignity Center at Hennepin Avenue United Methodist Church. 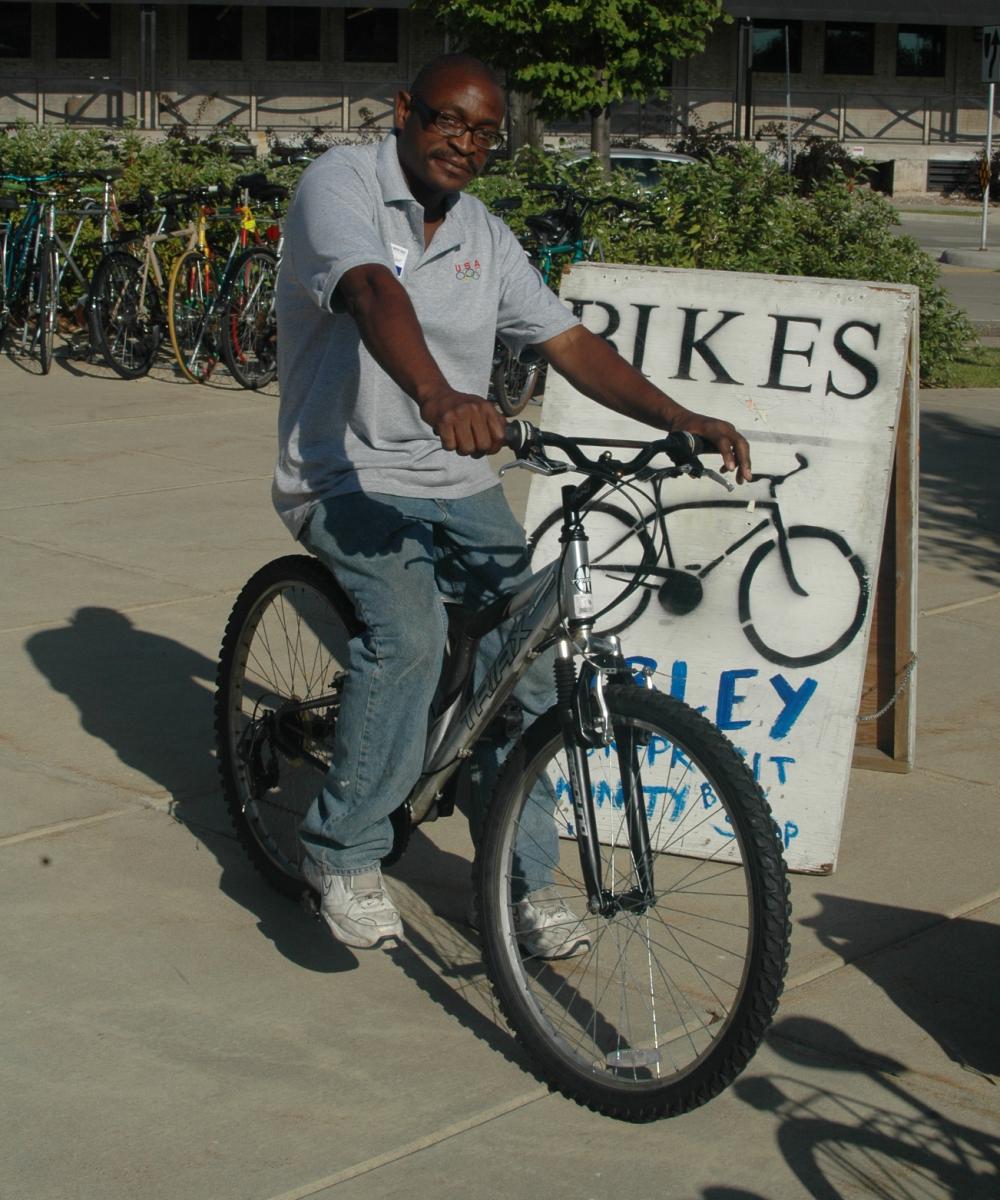 As autumn fast approaches, Snyder and her staff are reaching out to library participants who want to extend their riding season. After Wednesday’s program, she approached Hicks to see if he wanted to put studded tires on for the winter.

“Can you put chains on it?” he joked.

In all seriousness, Hicks said he does intend to try winter riding; he can’t fathom waiting for the bus when he could just keep going on his bike. He’s already lost ten pounds, he said, and he wants to get even more fit.

So Hicks really plans to keep pedaling to his part-time job, even through the coming sleet, wind and snow?

“Oh I will,” he said with self-confident grin. “Believe me.” 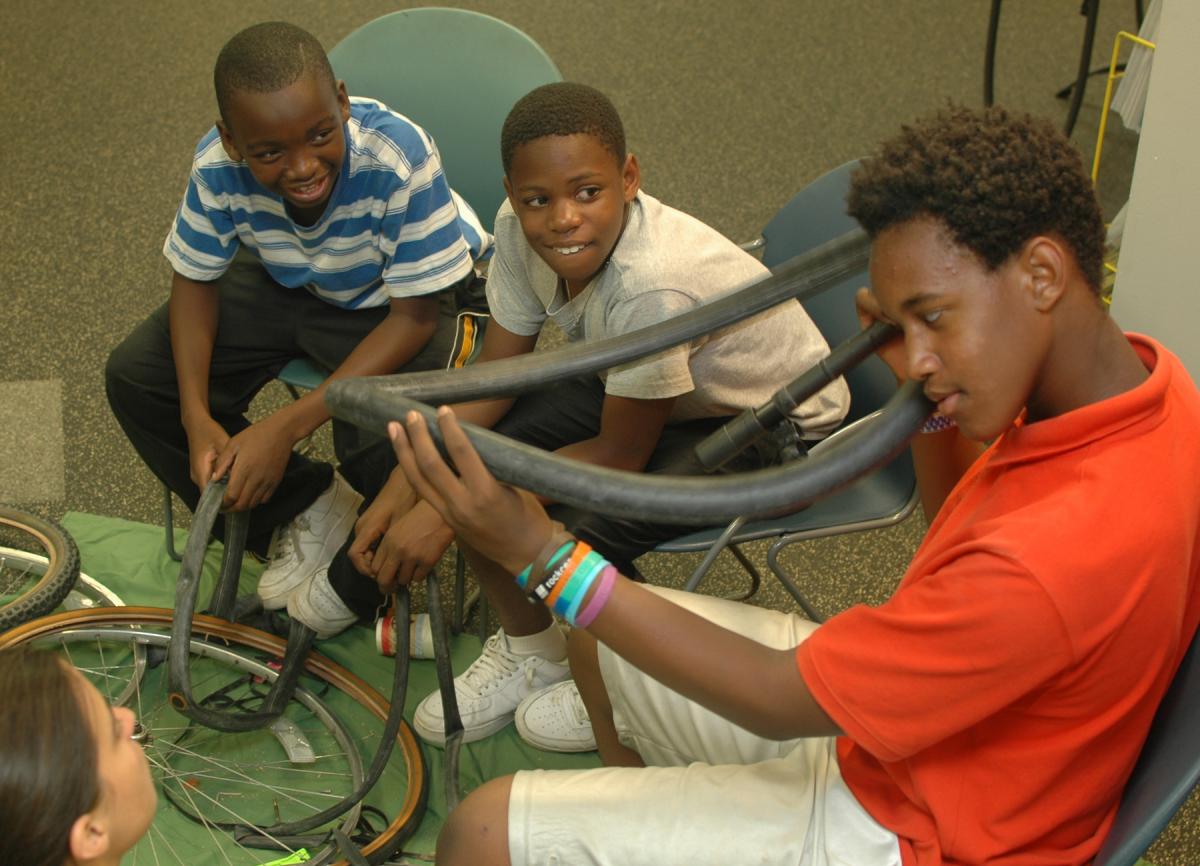 Clockwise from lower left, Ashley Sartorius of the Hub Bike Co-op works on fixing flats with Isaac Amoussou-Kpakpa, Aaron DeSouza and Isaac DeSouza of North Minneapolis. The Hub was one of several bike-related organizations who participated in Wednesday’s celebration in St. Paul.