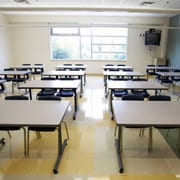 The Brooklyn Center school district finally won a levy referendum on Tuesday night. The budget won’t grow at all – this was only a renewal vote for the current levy – but at least it won’t shrink as much as it would have had the vote failed. This was the last chance to renew the levy, and it allows the little school district to keep fighting for a while longer.

Brooklyn Center’s story is a testimony in miniature to the effects of conservative budget-cutting. Despite being an urban district, BC is tiny, only 2.8 square miles in size. There are no major property holdings in the district, and the population is mostly middle class. In other words, it’s not set up to sustain funding on its own through local property taxes.

It hasn’t had much choice, however, as state funding has declined under conservative spending policies. Like other districts across the state, BC has felt the pinch of the 13% inflation-adjusted reduction in state aid that’s been worsening since 2003. The district has lashed together other financial support through grants and magnet programs, but it’s also had to turn to its community time and time again. The answer, unfortunately, has often been, “No.”

This kind of approach doesn’t leave much room for adapting to state-level changes. When the state government increased the amount of payments it’s delaying to districts, communities like BC were sent scrambling. Yes, they can borrow money at fairly low rates, but our schools deserve better than that.

Time and again, we’ve seen how the conservative refusal to raise taxes at higher levels means that local communities are forced to choose between increasing their own taxes or cutting support for their schools. It should not be too much to ask that our state government fulfill its constitutional obligation to support our schools, but apparently some don’t see it that way.