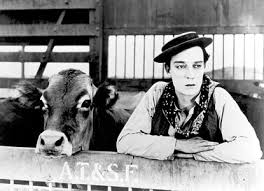 In Go West, Keaton plays Friendless, a drifter who ends up working as a cowboy on an Arizona ranch and goes to unbelievable lengths to protect his beloved Brown Eyes. The High Sign, released in 1921, centers on a hapless fellow drawn into a plot hatched by the Blinking Buzzards, “a bold bad bunch of bloodthirsty bandits who would break into a bank, blow a battleship to bits or beat up a blue eyed baby blonde.”

There are many reasons to love Buster Keaton–his pitch-perfect reactions to the most outrageous situations, his chase scenes, his eye-popping camera tricks, his death-defying stunts, his visual flair, his underrated ability to define a character, to name a few. But one of the things I most enjoy about his movies is how he and his team of gag writers played with the themes of masculine insecurity and changing gender roles.

In Three Ages, Keaton jokingly shows the ways a man’s value has been measured throughout history. In prehistoric times, a girl’s father decided if a fellow was a worthy suitor by feeling his muscles and seeing how he handled being clubbed on the head. In ancient Rome, it was a man’s status in the Roman army that determined whether he deserved the girl. In 1920s urban America, it’s the man’s bank balance that matters–and it’s the girl’s mother, not her father, who decides which man is right for her daughter.

In Battling Butler and especially in His Wife’s Relations, Buster’s character gets checked over by more stereotypically manly, strapping men and is found wanting–a weakling. The entire plot of Keaton’s masterpiece The General is fueled by his character’s desire to prove he’s not a coward.

It’s not surprising that Keaton and his contemporary Harold Lloyd were preoccupied with themes like these. The 1920s saw massive shifts in the ways women acted (and the ways men and women interacted). The changes went way beyond women bobbing their hair, shortening their skirts, and drinking and smoking in public in increasing numbers. Women were asserting their right to stay in the workforce after men came home from World War I, and they were exercising increasing clout in public life, refusing to stay home and be good little girls any more. Women fought for and won the right to vote in the 1920s, and they played a decisive role in the passage of Prohibition–an amendment that men tended to oppose.

The emergence of speakeasies threw men and women together socially in ways that the old male-centric saloons hadn’t, and the rise of the automobile gave them new ways to be alone together, forever changing sexual norms.

Meanwhile, ideas about what made a person important and valuable were changing, too. In the past, men had been valued for their moral characters, their ability to work hard and be honest, brave, and reliable. In the 1920s, it became much more important to have an interesting, charming personality–to be charismatic and socially engaging. Buster Keaton’s movies reflect all these changes and their accompanying anxieties in subtle, hilarious ways.

Go West features some of Keaton’s most memorable riffs on the theme of what a guy has to go through to prove he’s a worthy, capable man. It shows Buster tackling that most manly of movie archetypes, the cowboy. But Buster’s cowboy doesn’t know how to ride or rope, and he carries the most un-macho of guns–a teeny-tiny ladies’ pearl-handled garter gun that he found in a lost purse. That gun is the focal point of one of Keaton’s funniest running jokes.

Shot on location in Kingman, Arizona, Go West builds quietly and slowly, taking its time to work up to one of Keaton’s most deliriously weird chase scenes ever. The first time I saw that chase scene, I was laughing so hard I could barely breathe. I’m really looking forward to seeing it again with a roomful of people and live music at the Trylon this weekend.

You can go to take-up.org for more information on show times and to buy tickets. All tickets for the shows are $10.