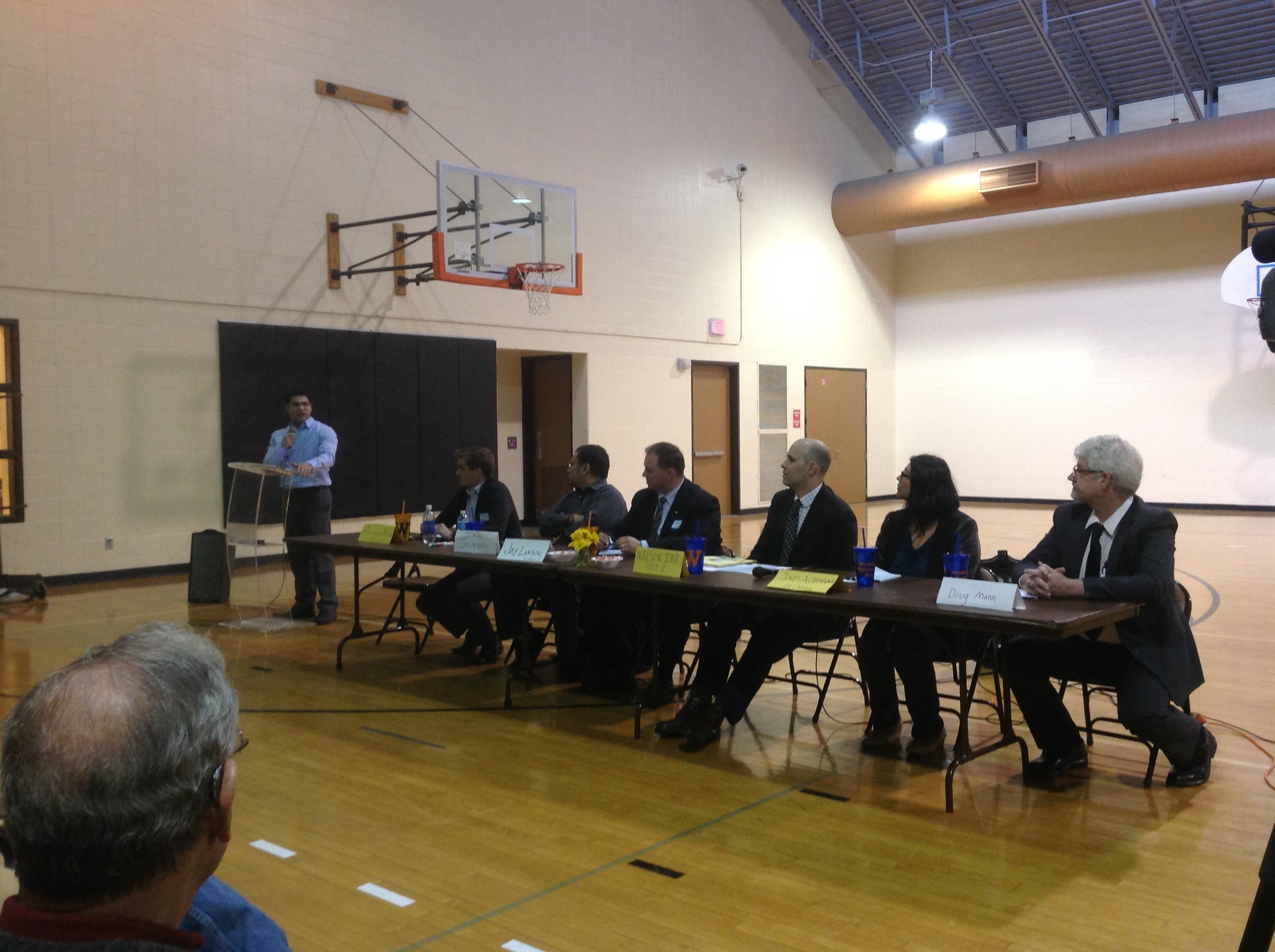 With a theme of “Why We Can’t Wait,” current Minneapolis School Board member Tracine Asberry hosted a school board candidate forum at Martin Luther King Park on April 24. The forum was intended to address school board governance questions, and it brought together citywide candidates Rebecca Gagnon, Ira Jourdain, Iris Altamirano, Doug Mann, and Andrew Minck, along with District Five candidates Jay Larson and Nelson Inz.

Asberry’s forum, which was described as being sponsored by partners and supporters of “Team Tracine,” was moderated by Victor Cedeno of Generation Next and included pre-determined governance questions as well as questions from the audience and from Minneapolis high school students.

An audience of around fifty people listened as the candidates sought to distinguish themselves from one another before the April 26 Minneapolis DFL Convention. The first question asked the candidates what they would look for in a future superintendent, which led to calls for someone who would lead with transparency and what Altamirano called a “collaborative yet decisive” approach to the job.

As the forum progressed, a high school sophomore from Washburn asked what the candidates would do to allow for “more inclusion of Latin American history” in the district’s classrooms. In response, most candidates spoke about how they would push for the greater inclusion of parent and student voices regarding what is taught in schools, with Mann saying he would want to look at what is present and what is missing in the curriculum.

A Bryn Mawr parent asked how to further diversify the literature students are exposed to in district classrooms. In response, current board member Gagnon said that the board is in charge of curriculum, but not Focused Instruction, which some have said emphasizes a more narrow, standardized approach to the classroom. She then went on to say that she supports the IB (International Baccalaureate) program currently used in the district because she believes it does “pull in” materials that represent broader perspectives.

Mann said today’s curriculum is “still about patriotism” and therefore offers a limited view of history and literature, while Minck said he believes teachers should use as many sources and resources as possible throughout grades K-12. Jourdain, Inz, and Altamirano also advocated opening up and diversifying the district’s curriculum, with Jourdain speaking about how his son has been exposed to alternative views of history through Cornel West and Howard Zinn. Larson also said Keewaydin School, where he serves on the PTA, has hosted curriculum nights in the interest of community engagement, and that he would like to see school board members attend such events.

The question of how these candidates would accomplish their stated goals as board members came up when they were asked to explain the difference between the school board and the superintendent. Gagnon said it was the Superintendent’s job to carry out the vision of the school board, but that there were “fuzzy lines” between the two, especially because board members also represent their constituents. Mann said he thought Minneapolis was an unusual district because it seems the superintendent has “a lot of policy making power,” while Altamirano said the board should govern while the Superintendent manages the district.

There were additional questions about how the board members would diversify the district’s teaching force, and what, if anything, they would do to support the aspirations of undocumented students. Finally, a Washburn high school student gave a spoken word performance, this time around the theme of testing and standardization, saying, “My education is teaching me not to be myself.”

In response, the candidates spoke of being opposed to too much testing, with Jourdain saying he had opted his children out of the tests because he believes “we should know what is on those tests.” Larson spoke of his own distaste for tests, and said he wants to see more teaching and creativity in the schools. Gagnon said “we need to change the culture at school,” by reducing class sizes and freeing up schedules, for example, so that teachers can get a better sense of “what motivates our kids.” Minck alluded to this as well, and said critical thinking and innovation should also be a priority.

The forum ended with Asberry thanking the Team Tracine partners in the room, as well as her District 6 constituents, as she reminded the audience to “hold current school board members accountable.”