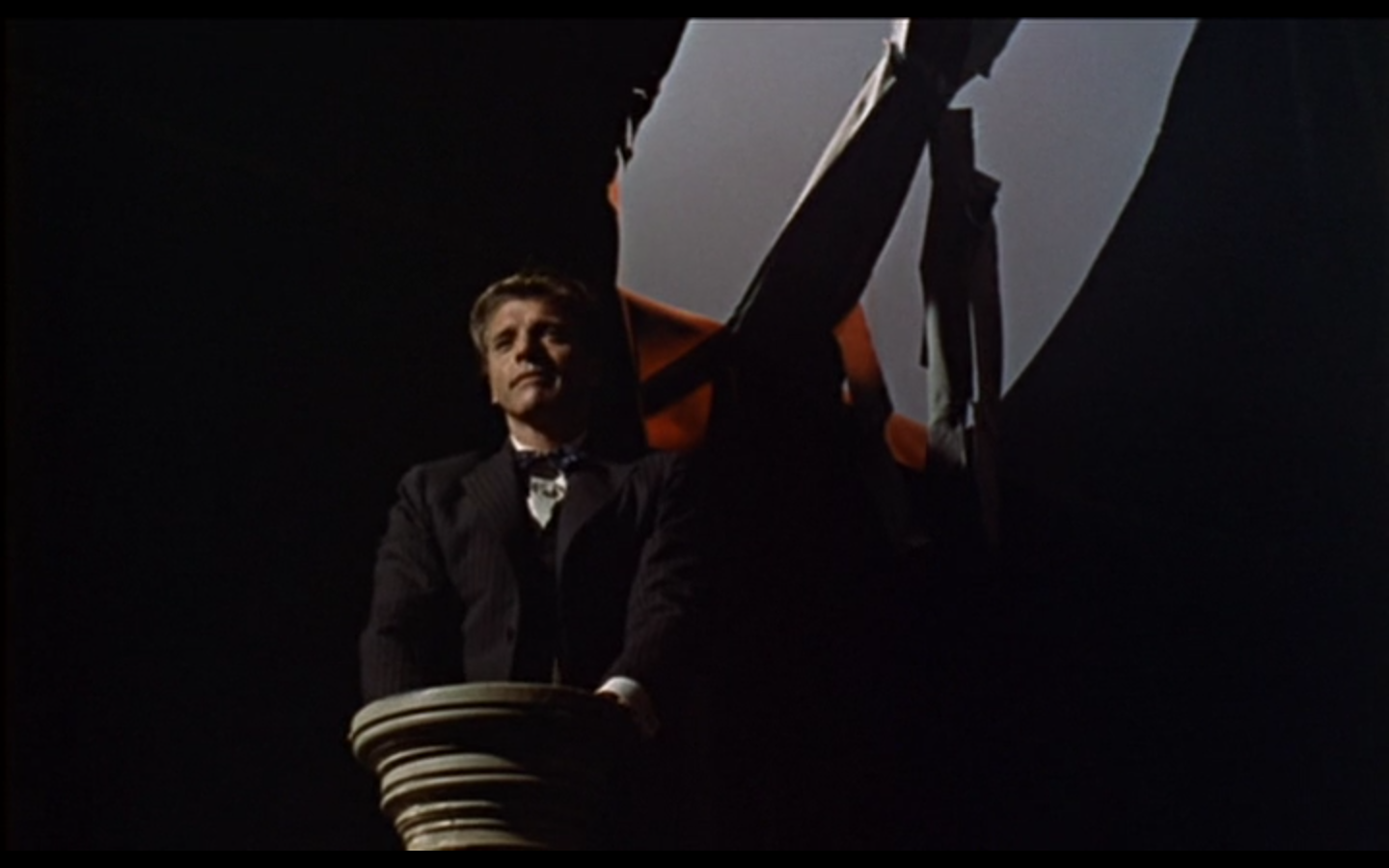 I once dated (briefly) a guy who sold steel. I kept asking him about steel––what it’s made of, what it’s used for––until one day he said in exasperation, “I don’t care about steel. I’d sell anything.”

That’s Elmer Gantry. He’s the all-American salesman: he’d believe, really believe, in anything he thought you’d buy. It is success that proves faith in this religion, not the other way ’round.

The Lancastic! retrospective of Burt Lancaster films continues at the Trylon Microcinema through November, the month marking the 100th anniversary of Lancaster birth (Nov. 2, 1913), with Elmer Gantry on November 11 and 12.

Playing the title character, Lancaster won his first and only Oscar, for Best Actor. Elmer Gantry is a role and a character as big as he is, and Lancaster puts his whole back into it. Definitely a film to see on the big screen.

The movie is based on the 1927 novel of the same name by Minnesota’s own Nobel Prize–winning author, Sinclair Lewis. “Elmer Gantry was drunk,” the novel opens, and Lancaster is terrific as the boozing, womanizing traveling salesman.
Gantry is a believer, of a sort. “Praying’s the cheapest first-rate medicine I know,” he says. But was booted out of seminary for seducing the preacher’s daughter, Lulu Baines (Shirley Jones). “He rammed the fear of God into me so fast,” Lulu says of her willing seduction behind the altar, “I never heard my old man’s footsteps.”

Shirley Jones won Best Supporting Actress for her role as the preacher’s daughter turned prostitute. It must have been for acting against type, coming off wholesome musical Oklahoma! because Jones’s Lulu is a silly, air-spun girl. One should imagine instead, I think, that she might have the same great-grandaddy as President Lyndon Baines Johnson: Baptist preacher George Baines. Still, her character of a betrayed woman who continues to care for Elmer illuminates the paradox of his power: he doesn’t mean to hurt anyone, but he does. Jones is too frothy, but when she appears halfway through, she adds bubbles to a long movie that was starting to go flat. And she does look sexy in a slip.

British actress Jean Simmons as Sister Sharon, the evangelist Elmer falls for is similarly too airy. Her maiden “milk is proof of God’s goodness” act supposedly converts tents full of adults, but one wonders if even Midwestern farmers without television (this is the 1920s) would find her compelling.

Sharon is supposed to be a firebrand, based on evangelist Aimee Semple McPherson, part Houdini, part Teddy Roosevelt, who preached a dramatic God. Simmons is too wispy, and her plummy accent slips through and jars this very American story. It seems unlikely that Lancaster’s character would risk immolation for her.

The woman who does match Lancaster is Oklahoma-born Patti Page, making her film debut. A popular singer with a voice like French silk pie, Page is most famous for her hit song “Tennessee Waltz.” When she first appears onscreen, she’s got such presence you might think she was the main heroine. But Page plays the small role of choir leader Sister Rachel. Earthy and real, she and Elmer both sing the hymn “I’m on My Way,” a sort of religious counterpart to “I Did It My Way.” Elmer romances her only as a way to Sharon, but Rachel is the woman Elmer should have gone with.

Elmer Gantry is not, however, a movie about making good choices. It’s a movie about driving passions so hot and strong––for a sale, for salvation––they burn a person up. Literally, in one case, when the tabernacle catches fire at the end of the movie. Fire is mentioned throughout the film, and cinematographer John Alton sets the mood by casting dark red and brown shadows.

There was a time––between the 1989 fall of the Berlin Wall and 9/11––when Elmer Gantry might have felt outdated. It seemed that perhaps the world had taken a step away from irrational belief. Religion was a force in politics, yes, but a force capable of bringing down buildings?

Except in some of its sexuality (there are a couple cringe-making lines), however, the film doesn’t feel outdated today. Besides the rise of world fundamentalism and revelations of sexual abuse by big-name evangelists and Catholic priests, Elmer Gantry calls up popular figures such as Sarah Palin. And Tom Cruise, and the whole celebrity-studded cult of Scientology; Cruise jumping on Oprah’s couch or in his fantastic role as the preacher of male supremacy in Magnolia.

Gantry’s descendants stretch from Neil Diamond’s 1969 song “Brother Love’s Travelling Salvation Show” to the 2012 film The Master, by Paul Thomas Anderson (who also made Magnolia). In The Master, Joaquin Phoenix plays an alcoholic failure who falls in thrall to cult leader Lancaster Dodd (Philip Seymour Hoffman). They have better chemistry between them than Simmons and Lancaster did, but Elmer Gantry is the grandaddy of them all.

BEFORE (OR AFTER) YOU GO…

TAKE NOTE: The film’s opening title sequence includes this advice: “Due to the highly controversial nature of this film, we strongly urge you to prevent impressionable children from seeing it!”

You might want to watch some Patti Page–maybe “Whatever Lola Wants,” here:
http://www.youtube.com/watch?v=ZSsH_i6xpf8

Also, Neil Diamond’s 1976 live performance of his song “Brother Love’s Travelling Salvation Show”, here:
http://www.youtube.com/watch?v=Brt4r_y1y4Q#t=68
In a very Elmer Gantry moment, starting at 2:54, after singing “the Lord gave us two good hands, brothers and sisters, one for the givin’ and one for the takin’,” Diamond stretches out his hand toward a young woman who places in it the key to what must be her hotel room.
Thanks to Stacia Kissick Jones and her movie review blog She Blogged By Night for the above, noted here:

Two years before adapting Elmer Gantry to the sceen, writer and director Richard Brooks, also adapted and directed The Brothers Karamazov (1958), which featured William Shatner (the original Captain Kirk) in his first movie role, as the saintly brother Alexei.

For that matter, one year after Elmer Gantry, Burt Lancaster appeared in the same movie as William Shatner, Judgment at Nuremberg (1961).

Jean Simmons appeared in the Star Trek: The Next Generation episode “The Drumhead” (1991) as Rear Admiral Norah Satie.

Trylon Discount cards
$25 for 5 tickets, cards can be redeemed for 1 or 2 seats at a time (on the day of show)

Lit by fire, Lancaster (Elmer Gantry) preaches to a crowd.

Lancaster as Elmer Gantry: "When I was a child, I understood as a child..."