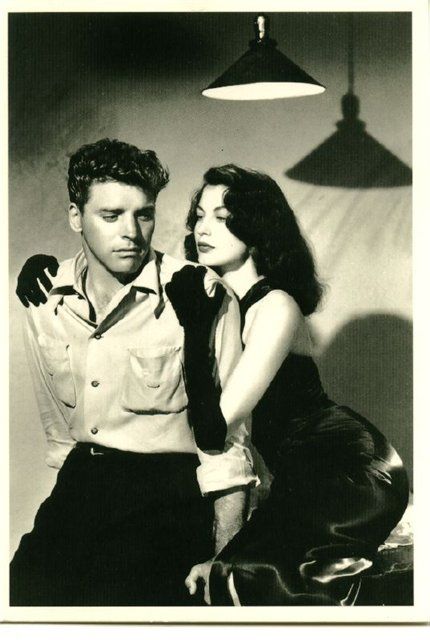 Burt Lancaster and Ava Gardner in the film-noir classic The Killers (1946), the first offering in the "Lancastic! A Century of Burt Lancaster" film series playing at the Trylon Microcinema in November.

“Lancastic!” a retrospective of eleven Burt Lancaster films, kicks off at the Trylon Microcinema on November 1 with Lancaster’s debut film, The Killers (1946). A film-noir classic, The Killers was directed by German-born Robert Siodmak, a master of shadow and light.

Film critic Pauline Kael called Lancaster “a great specimen of hunkus Americanus.” But in his first screen appearance, playing a none-too-bright boxer who took more beatings than he ever gave, he is more like a bruised lily.

The film’s first 13 minutes recreate almost word-for-word Ernest Hemingway’s short story “The Killers.” A couple of men turn up in a nowhere town. One fat, one thin, they look like a comedy duo. They’re not. They announce in the local diner that they’ve come to kill a man called Swede (Lancaster). A young man, Nick Adams (a regular character in Hemingway stories, but merely a gofer here), runs to Swede’s rooming house to warn him.

We first see Swede stretched out on on his bed, one bare arm behind his head, the other resting on the waistband of his trousers. His face is hidden in shadow, his athlete’s body on display.

Breathless, Nick tells Swede that men are coming to kill him. Swede doesn’t even sit up. Softly he says, “There’s nothing I can do about it.” To Nick’s questioning, he only replies, “I did something wrong, once.”

What did he do that left him so passive toward his own death?

That’s the question Hemingway’s story never answers and the question that bugs James Riordan (Edmond O’Brien). An insurance investigator who shows up to settle the dead man’s policy, Riordan unravels Swede’s story, which plays out in a series of flashbacks. Inevitably, it arrives at a double-crossing dame: Kitty Collins (Ava Gardner), standing by a piano in an off-the shoulder black satin dress, looking far more armored than Swede. You might guess how this is going to play out, but you want to watch it happen anyway.

The Killers is a beautiful film, with white shirts that glow and fedora hats that cast knife-edged shadows across their wearer’s faces. It will look even better on a large screen.
The Trylon is showing The Killers on a double bill with Criss Cross (1949), also directed by Siodmak, starring Lancaster and Yvonne De Carlo.
The original trailer for Criss Cross states in a voice-over, “If loving her meant tangling with a killer, he was ready for that.” You just know that’s not the case.

BEFORE (or after) YOU GO:

Schrader wrote Taxi Driver and directed American Gigolo, among other films. He provides a context for the “mood of pessimism, cynicism and darkness” in The Killers in this excellent and much-cited essay.

2. Ernest Hemingway’s (very) short story “The Killers” appears in various print collections, including the Nick Adams Stories, or you can read it online here:
http://www.dibache.com/text.asp?id=639&cat=51

3. The brightly lit 1964 version of The Killers, directed by Don Siegel (who also directed Clint Eastwood’s Dirty Harry movies) and starring Lee Marvin, is available on a 2-DVD set from the Criterion Collection, along with the 1946 original and a bunch of other film goodies.

Trivia for Star Trek fans:  Gene L. Coon wrote the screenplay for the 1964 Killers. Coon wrote some of the most popular Star Trek episodes in the 1960s, including “Space Seed.” For that episode, he created the villain Khan, who is key to the films Star Trek: The Wrath of Khan (1982) and Star Trek Into Darkness (2012).

Trylon Discount cards
$25 for 5 tickets, cards can be redeemed for 1 or 2 seats at a time (on the day of show)

An original movie poster for "The Killers" (1946), starring Burt Lancaster and Ava Gardner