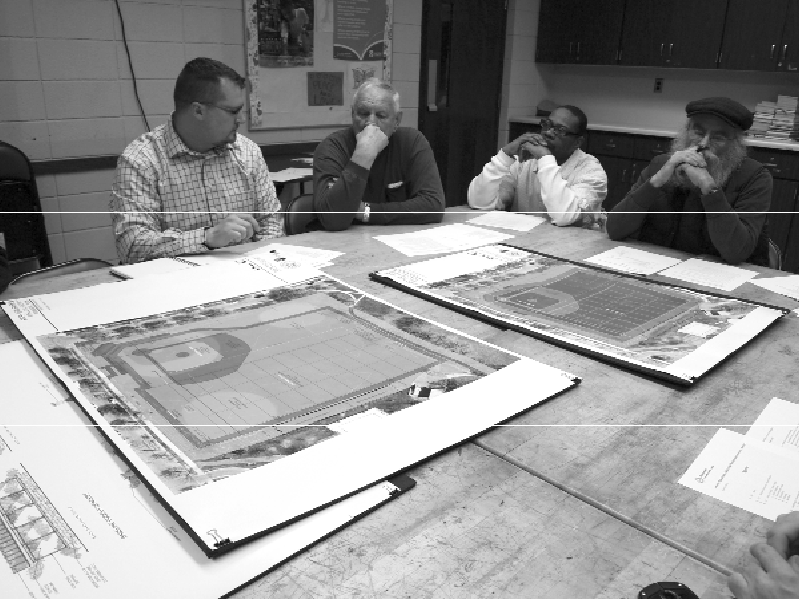 Gary Wilson is second from left, David Luce is at right above, looking at drawings with the consultants and other park users. (Photo by Margo Ashmore)

David Luce has lived next to Farview Park for decades. Gary Wilson has coached and volunteered in other ways at Farview Park for decades. The two of them, on opposite sides of the impending re-working of the ballfield area, met with park planners and consultants from the Cal Ripken Sr. Foundation to review options Jan. 7 at Farview. A couple of other park users and other interested parties attended.

The Minneapolis Park and Recreation Board has already voted to accept a donation that’s still being raised, to install artificial playing surfaces at both Farview and North Commons parks. The key point discussed in January was whether to go ahead with a full-size football field 100-yards-plus long or to save two trees that would be in the way and have a smaller field, 80-yards-plus.

(Plus means the areas for end zones and overrun areas that give ball handlers a chance to wind down before bumping into anything. There was talk of needing padded walls in any case, as the new field would be cut into a slope.)

Luce has claimed that the artificial turf will be harmful, full of bacteria. He also wanted to be sure that the trees would be replaced based on biomass, not just number. Sledding in the area would no longer be possible. Though park officials have promised that the gates at the fields would be left open, residents supporting more passive and spontaneous uses for the park have been skeptical that this would really be the case.

The coaches argued for the 100-yard full-size football field, as anything less would mean that most of the Farview teen teams would not be able to host home games.

Having a field designed for football, baseball, and soccer, all with different markings, would open the field up to adult games as well. The two sides disagreed over the amount of spectator traffic and speeding, litter, noise and tailgating that would come with those games. It was pointed out that no alcohol or smoking are allowed at or within 100 feet of the park, not even on the sidewalks.

Based on comments from a previous meeting, designers from LHB architects, working on behalf of the Cal Ripken Sr. Foundation, came up with an enclosure for spectators reminiscent of Nicollet Field, with the baseball field’s home plate near the southwest corner of 29th Avenue and Fourth Street North. When last we checked, they were making further tweaks to those plans, and the foundation was trying to re-prioritize or assemble more funds for the potential larger field.

For information on the process, contact Jennifer Ringold (pictured on NorthNews front page), Manager Community Engagement and Citywide Planning at jringold@minneapolisparks.org or 612-230-6464.